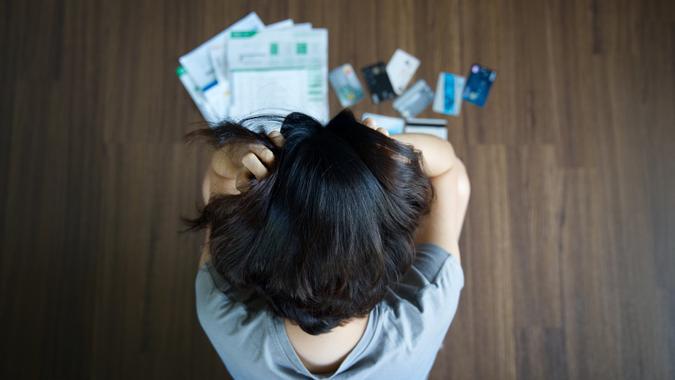 All the financial self-help books in the world can’t compare to the education that real life has a way of doling out. From globally seismic events such as the pandemic to deeply personal ones like a divorce or job loss, teachable moments on personal finance are everywhere — as long as you’re willing to learn.

Expert advice isn’t hard to come by, but sometimes it’s regular people with regular stories who offer up the sagest wisdom of all. GOBankingRates passed over the gurus to tell the stories of ordinary people who learned extraordinary lessons about money just by living their lives. Most of them never asked for the lessons, which often were learned the hard way. But they all emerged stronger.

These are their stories.

Credit Is Not Free Money

“In college, I was drawn to all of the free incentives for signing up for a credit card in the student union,” he said. “They got me for a lousy T-shirt.”

He quickly put his new credit card to use, racking up charges for expensive sunglasses, overpriced clothing and concert tickets.

“For a year or so, I was happily paying the minimum each month and thinking this is an amazing deal,” Chavez said. “All this fun stuff for just $10 per month. It wasn’t until I was graduating and getting ready to be an adult that I realized it wasn’t such a good deal. I was paying the minimum but never bringing down the balance. I started doing the math and realized I would never be out of debt by paying just the minimum. Luckily, my parents bailed me out and paid the credit card off.

“Since then, I have rarely, if ever, carried any credit card debt in my adult life. My motto now is: If I can’t afford it, I don’t need it.”

When Investing, Spread Out Your Bets

Nearly a decade ago, Zach Tetley, co-founder of Nexus Homebuyers, decided to start investing about a year into his first job.

“I had saved a considerable amount of money and thought it was time I put it to good use,” he said. “After researching my options, I decided on investing in the stock market.”

He was aware that stocks are volatile and risky, “but I was young and daring back then,” he said. “I put all my money into this one company that I believed would be the next big thing.”

As it turns out, he picked the wrong horse.

“The company filed for bankruptcy the next year, and I lost my investment because I couldn’t pull out at the right time,” Tetley said. “What I learned from this experience was to never put all your eggs in one basket.”

Don’t Be Foiled by FOMO

Charlie Brown once said that happiness is being one of the gang — but when it comes to keeping up with your crew, paying is usually a part of playing.

“When I started working, indulging in activities like fine dining and shopping with my colleagues became a common practice that ultimately drained my budget,” said Patti Naiser, CEO of Senior Home Transitions. “The fear of missing out made me commit to things that affected my livelihood in the long run.”

Naiser recommends enjoying the simpler pleasures in life, even if it means occasionally forking over some cash, but prioritizing saving and overall financial health first.

“The key is not to let FOMO ruin your budget to the point where you spend your 30s paying off credit card debts and regretting every lavish shopping or vacation trip,” she said. “Oftentimes, I found myself dining outside with my work friends and then going on expensive trips with family and loved ones. This dictated my lack of funds in the coming years; and, if it weren’t for my side hustle, I would be under considerable debt in my twilight years.”

Budget for Business and Life

Claire Grayson, co-founder of PersonalityMax.com, never thought much about budgeting — until she started a business.

“Running a business is tough and there are a lot of things no one tells you about the early days,” she said. “Even if you have someone who mentors you and gives you some pointers, there’s not much that can prepare you for the trials of running a business until you fully experience it.”

It was then that she learned the value and necessity of keeping tabs on every dollar coming in and going out.

“If you are starting a business and you fail to draw up a reasonable and sustainable budget,” Grayson said, “I hate to tell you that your business has little chance of survival.”

Before founding her current business, she launched a book review website in her college years. She was big on ideas but light on bean-counting.

“Needless to say, I soon had to dip into my personal wallet, and that didn’t end well for me,” she said. “My book review venture did not last long or end well, but personalitymax.com is thriving, and I dare say I must be doing something right.”

Your Golden Goose Can Stop Laying Eggs at Any Moment

Even if you don’t dream of being a Kardashian-level influencer, monetization of your social media networks could be an important part of your side hustle or full-time business.

Dr. Jay Cavanaugh of The Vibe Mindset learned that’s a rug that can quickly be pulled out from under you — twice.

“I spent hundreds of hours building up two Instagram accounts, only to have one shadow banned and another banned for life,” Cavanaugh said.

One account that promoted body positivity and self-love was getting 1,000 followers a day at its height until the account was deemed offensive. The second had 68,000 followers and was his No. 1 source of website traffic and revenue.

“That revenue stream was shut off like a faucet,” said Cavanaugh, who mentioned that the loss came just five days after he closed his medical practice to pursue full-time mindset coaching. “The lesson learned is: You do not own your social media accounts; they do.”