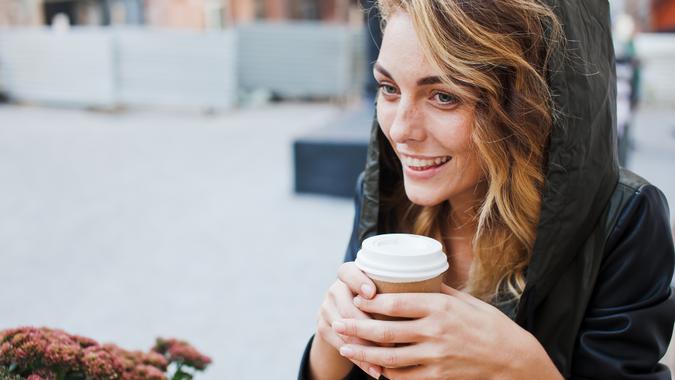 If your first thought upon waking up is a delicious cup of your favorite coffee, you are not alone. Coffee is among the most popular drinks consumed in the world second only to water. In the United States, coffee lovers come in all ages, genders and ethnicities. Seventy-two percent of people over the age of 60 drink coffee in the morning, 64% in the 40 to 59 age range and 47% of people age 18 to 24 do as well, according to Perfect Brew. People across all regions and among numerous racial groups enjoy the perfect brew.

What People Are Drinking

Big chain coffee retailers like Starbucks have popularized the fancy, sugary coffee drinks such as the pumpkin spice latte or the frappucino. But most Americans — or 44% of those in the Perfect Brew study — are drinking “traditional” coffee without any frills. Only 24% are drinking espresso-based beverages that typically come with some syrups, extra sweeteners and whipped cream.

A survey done by MedAlertHelp found that a whopping 79% of its respondents aren’t actually buying their coffee at a café anyway; they’re brewing and drinking at home.

The Financial Guide: 50 Easy Things You Should Do To Save Money

While all genders enjoy their java, women tend to spend more than men, on average in the United States. The Perfect Brew reports that women spend about $2,327 per year on their coffee habit, while men spend almost $400 less, at $1,934 per year.

Despite their expenditures, men are drinking 2.22 cups to every 1.79 cups of coffee than women are. On average, all genders are drinking only about two cups per day at home, but 9% of people surveyed drink upwards of six or more cups of coffee per day!

Where Are People Buying Their Coffee?

The coffee gourmands with the most refined palates are buying their coffee at roasteries and coffee shops — but that’s only about 9% of coffee drinkers surveyed. The rest of us are mostly buying our coffee at the supermarket — 67%. And then, of course, there are the 13% who buy their coffee from a chain such as Starbucks, Peet’s or Dunkin’ and the 14% who order their coffee online.

How Much Are People Spending at Coffee Shops?

Though most of you, wisely and frugally, are spending less to drink coffee at home, for those people purchasing their coffee at coffee shops, the average spend is quite significant. People spend an average of $15 per visit to Green Mountain Coffee; $12 to visit Starbucks, McDonald’s and Peet’s Coffee.

Those dollars add up to nice profits for the coffee chains. Starbucks is the leading contender in coffee sales, with $21.38 billion dollars in coffee sales per year (as of 2019). Dunkin’ follows at $9.229 billion, and Peet’s coffee comes in with about $358 million in sales per year.

Find Out: 25 Things You Should Never Do With Your Money

What Else Can You Do With the Money You Spend on Coffee?

For the people buying the most affordable coffee at the supermarket and making it at home, you’re probably spending the least amount of money every year on coffee. But let’s look back up at that example of what women and men spend every year. If you saved that money instead of spending it, in 10 years, the average woman would have $23,270 saved, while the average man would have $19,340. And that’s without earning any interest.

Say you took even $1,500 per year and invested it instead? How might that money work for you in 10 years?

Retirement account: While retirement accounts vary on their returns, the average 401(k) yield is about 15.1% for U.S. workers (for 2020), according to Business Insider. That would be an additional $226 per $1,500 of your coffee money invested each year. Over 10 years, if you kept reinvesting that money, including the earnings, you could end up with over $35,000 thanks to compound interest.

CD: You could earn as much as 0.80% on a certificate of deposit. If you invested two years’ worth of your saved coffee money, so $3,000, you could earn almost $250 in 10 years. While it’s not a lot of money, it is more money than you would have if you did not invest anything, and, it puts that money out of your reach, so it can’t be spent.

While nobody is saying you have to stop drinking your favorite beverage, it might be eye-opening to see how much money you could save by cutting back, brewing at home, or buying the most affordable coffee option you can get.