Angry Workers Are On Strike to ‘Earn a Decent Living’ 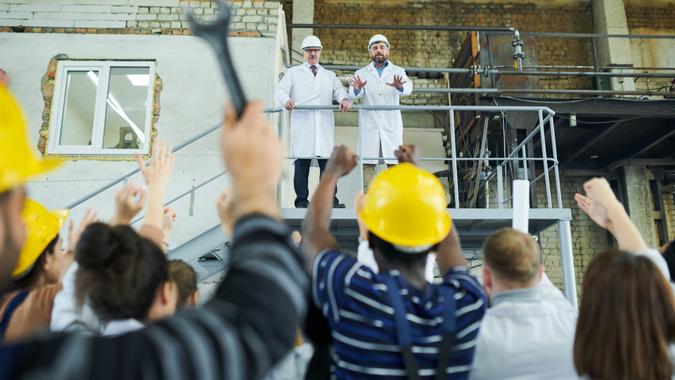 One element of the workforce that has changed since the pandemic is that employees are regaining some bargaining power. Whether it’s quitting jobs, going on strike or changing careers, the pendulum has shifted in employees’ favor. And, after more than a year of work in difficult conditions either physically or mentally, workers asking for higher wages and more flexibility.

See: 4.3 Million Workers Quit in August, The Highest Number Since December 2000
Find: How To Snag That Seasonal Job — and Make It Permanent

Last week, 10,000 union members of John Deere went on strike “for the ability to earn a decent living, retire with dignity and establish fair work rules.”

Chuck Browning, Vice President and director of the United Auto Workers (UAW) Agricultural Implement Department, said in a statement: “We stay committed to bargaining until our members’ goals are achieved.”

In addition, workers at the Kellog Company also went on strike earlier this month.

“For more than a year throughout the COVID-19 pandemic, Kellogg workers around the country have been working long, hard hours, day in and day out, to produce Kellogg ready-to-eat cereals for American families,” Bakery, Confectionery, Tobacco Workers and Grain Millers International Union (BCTGM) President Anthony Shelton said in a statement.

“Kellogg’s response to these loyal, hardworking employees has been to demand these workers give up quality health care, retirement benefits and holiday and vacation pay.

“The company continues to threaten to send additional jobs to Mexico if workers do not accept outrageous proposals that take away protections that workers have had for decades,” he added.

In another sign of discontent in the labor market, half of employed Americans intend to make career changes, citing the lack of empathy or the lack of flexibility in the workplace, according to a new survey, as GOBankingRates previously reported.

The survey cites two reasons: “One is if they felt that their employers did not understand them, that they weren’t providing empathy. This is especially true for working parents, male or female. They didn’t feel good about the experience, and they’re looking to leave. The second thing is that people are really leaning into flexibility, whether that’s flexibility by location, by when they work, or how they work. They want to leave if the employer is not providing that,” Catalyst President and CEO Lorraine Hariton told CNBC.

See: 5 Teen Jobs That Don’t Exist Anymore — and How To Make Money Instead
Find: Walmart and 6 More Companies Giving Workers a Raise in 2021

The report also shows that 41% of those surveyed say they are considering leaving their job because their company has not cared about their concerns during the pandemic and a whopping 76% say they want their company to make work permanently flexible in terms of schedule and/or location, according to CNBC.

The survey follows the Labor Department’s Job Openings and Labor Turnover Survey earlier this month. The data reflects a similar trend, as there was an increase in “quits rates,” in August, with 2.9% of workers voluntarily quitting their jobs, according to the data.