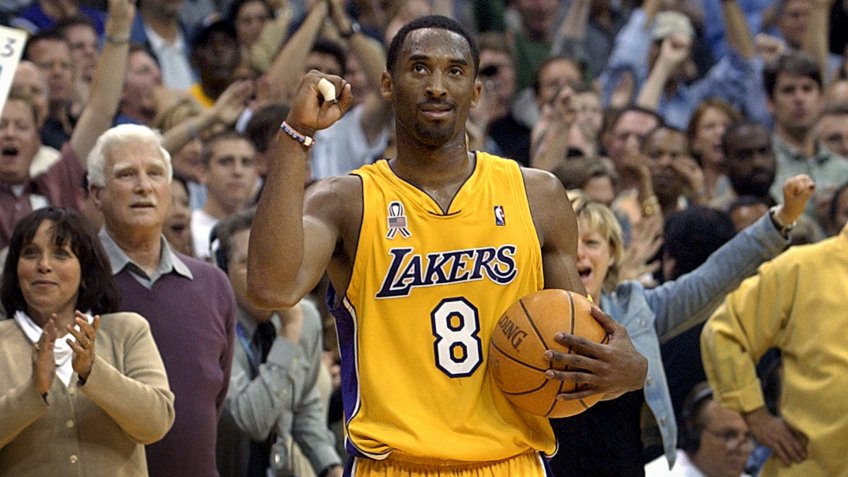 Brands need athletes just as much as athletes need brands. When they’re paired together by the magic of sports endorsement deals, both can make big bucks.

Click through to discover some of the richest athletes of all time and the endorsement deals that made them even richer. 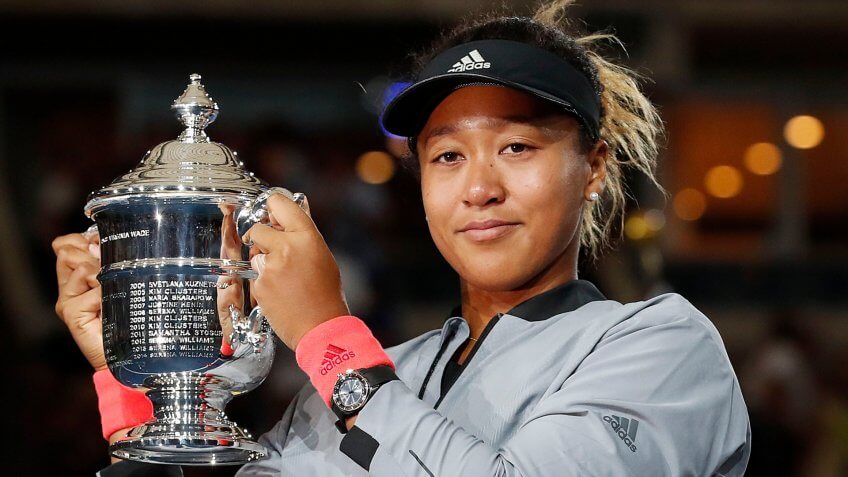 Naomi Osaka defeated Serena Williams at the U.S. Open on Sept. 12, 2018. Days after her upset victory, Osaka was reported to be signing an $8.5 million endorsement deal with Adidas, the largest deal the sports brand has ever offered a female athlete. Osaka recently made the switch over to Nike in April and is now apart of their roster of elite athletes like LeBron James and Serena Williams.

The tennis star also signed on to be Nissan’s next brand ambassador. Osaka’s Japanese roots are a strong tie-in to the car manufacturer. Her other endorsements include Nissin Foods,  watchmaker Citizen, Nippon Airways, and Proctor & Gamble. 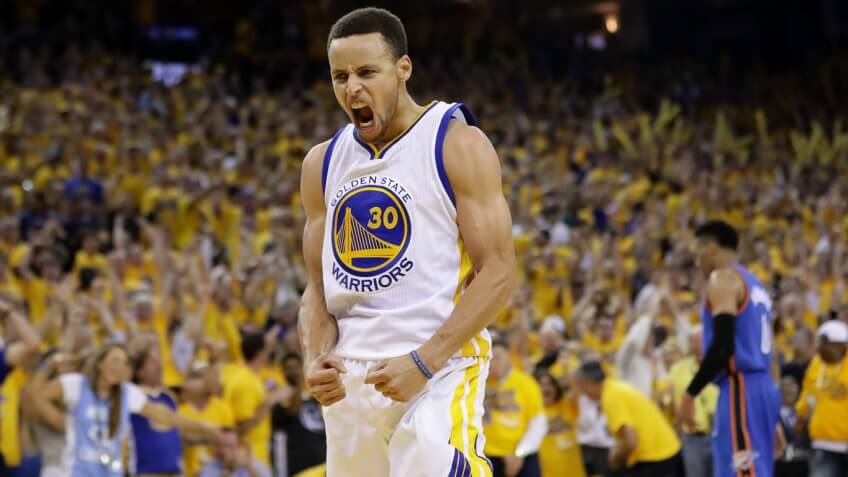 Stephen Curry and Under Armour

Two-time NBA MVP Stephen Curry surprised many people when he chose not to extend his Nike endorsement contract at the end of the 2013 season. Instead, Curry signed with Under Armour in a deal worth just under $4 million per year. In September 2015, he extended his deal with the brand to carry him through the 2024 season.

Curry is invaluable to Under Armour because the brand has trademarked phrases associated solely with the basketball star. Curry, who has nine signature shoes with Under Armour, has an estimated net worth of $130 million according to Celebrity Net Worth. 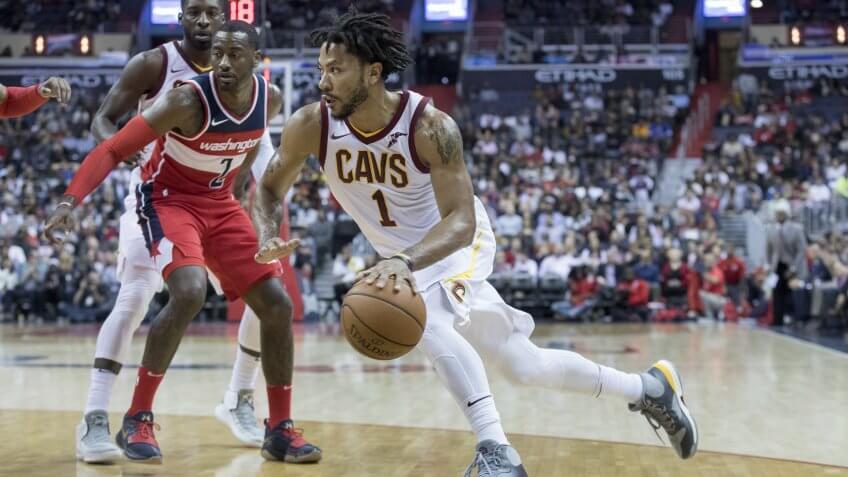 In 2012, Adidas made a major money move by inking NBA point guard Derrick Rose to a 13-year, $185 million deal — what was then the largest endorsement deal in sports history. At the time, the deal made perfect sense: Rose was the NBA MVP for the 2010-11 season and, by all accounts, was set to be Michael Jordan’s long-awaited successor in Chicago. Today, however, Rose is less of an asset and more of a liability to both his team and the Adidas brand.

Rose tore his ACL just a few months after signing the deal, and in the following years, he’s suffered a multitude of other injuries, including meniscus tears in both knees and a sprained ankle. If that wasn’t enough misfortune, in August 2015, Rose and two of his friends were accused of sexual assault. The case eventually went to civil court where Rose was exonerated. His deal with Adidas would most likely have been voided if he had been found liable.

With a net worth of $85 million, Rose now plays for the Detriot Pistons. He is still injury-prone. 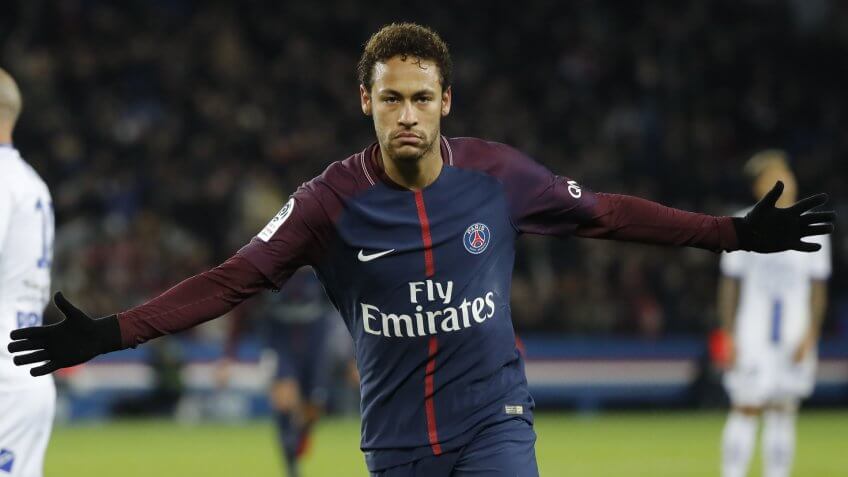 Soccer star Neymar da Silva Santos Júnior — better known as Neymar Jr. or Neymar — is the first soccer player ever to create a line of shoes with Nike’s Jordan brand.

Neymar had been a Nike athlete prior to aligning with Jordan. He signed an 11-year deal with the brand in 2011 for an estimated 9.5 million euros — about $10.2 million — per year. In December 2017, Nike debuted a new pair of Neymar’s signature cleats — the Nike Mercurial Vapor XI Neymar FG.

To top it all off, Neymar signed the most colossal sports contract of 2017 when he agreed to a world-record transfer with French soccer club Paris Saint-Germain worth approximately $262 million. His net worth sits at $185 million. 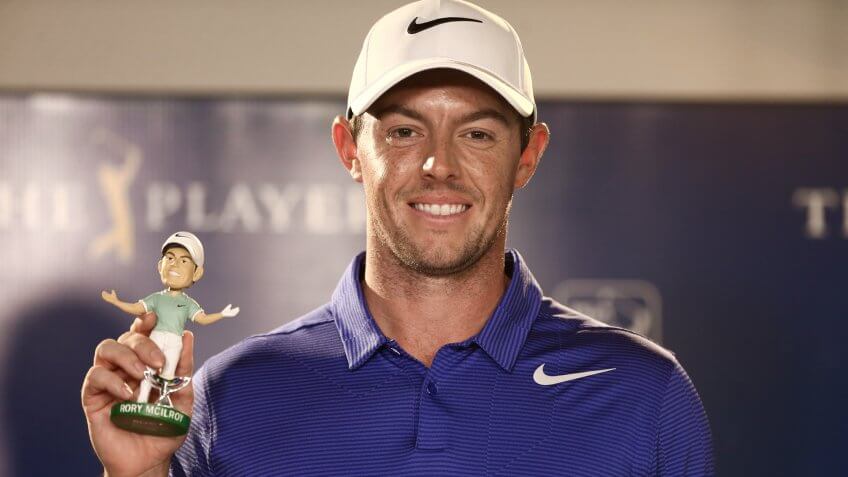 Golf phenom Rory McIlroy was sought after by endorsers at a young age. Now 28, McIlroy has endorsement deals with Omega and Upper Deck. McIlroy also replaced Tiger Woods as the cover athlete of Electronic Arts’ golf video game in 2015.

McIlroy’s largest endorsement deal, however, is with Nike. The golfer signed a 10-year, $250 million partnership with the brand in 2013. In April 2017, Nike announced that McIlroy had extended his contract for 10 years. In the new deal, McIlroy will endorse Nike apparel only, as the company has bowed out of the club-making business.

With a net worth of $150 million, McIlroy is among the richest golfers in the sport today. 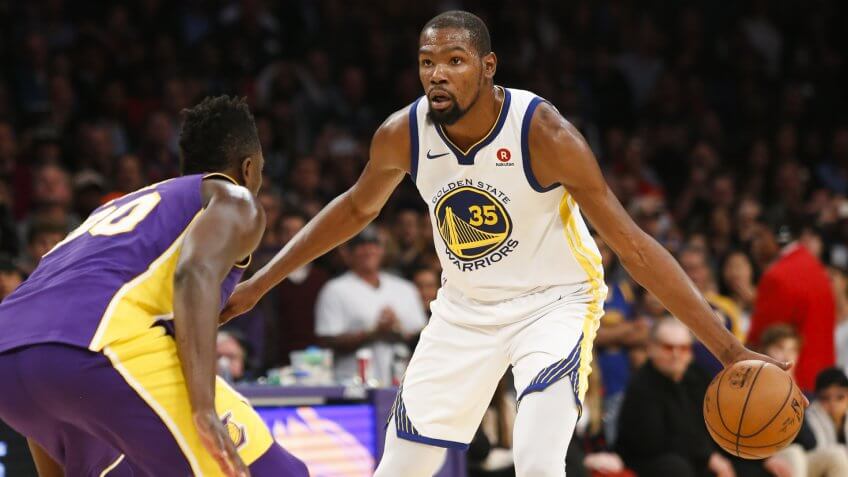 Kevin Durant first signed a seven-year contract with Nike worth $60 million in 2007. As the deal neared its expiration in 2014, Under Armour offered the then-Oklahoma City Thunder star a reported $265 million to $285 million deal. Nike countered that deal and Durant signed it.

Durant’s new deal with Nike could hit the $300 million mark and includes a $50 million retirement package. His signature sneakers on the Nike website range from $100 to $195 a pair.

Durant agreed to a four year, $164 million dollar contract with the New York Nets in June 2019. His net worth now stands at $170 million. 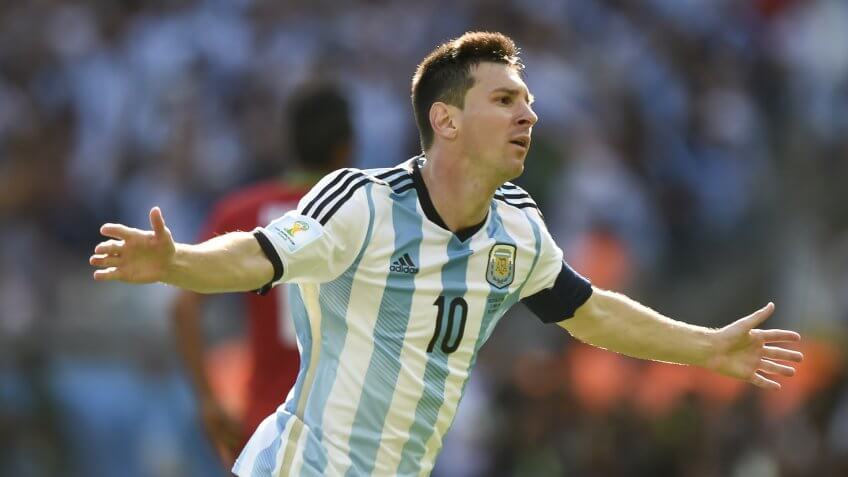 Lionel Messi is widely regarded as one of the world’s best soccer players. The Argentina star has won five Ballon d’Or awards — tied with Real Madrid’s Cristiano Ronaldo for the most of all time — the most recent of which came in 2015.

Messi has a number of lucrative endorsements. According to Forbes, he pulled in $28 million in endorsement money in 2016 alone. And in 2017, Messi signed a lifetime contract with Adidas, the value of which has yet to be revealed. Some of his other endorsements include Gatorade, Tata Motors and Huawei Technologies.

Messi’s current deal with FC Barcelona will keep him with the club through the 2020-21 season and pays him more than $80 million annually. He has an estimated net worth of $400 million. 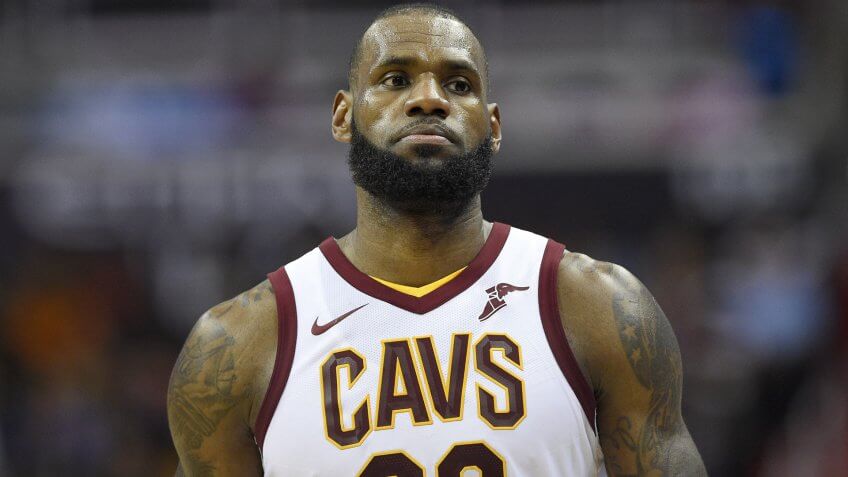 LeBron James far surpassed Derrick Rose’s deal with Adidas as the largest endorsement deal in sports history when he penned a lifetime contract with Nike at the end of 2015. Though the exact terms of the deal were never reported, James’ longtime business partner, Maverick Carter, told GQ that it is worth more than $1 billion.

Prior to the lifetime deal, Forbes estimated that James netted $90 million in a Nike endorsement deal from 2003 through 2010 and another $100 million from 2011 through 2015. In March 2017, the NPD Group reported that the 14-time All-Star had the best-selling signature shoe among all active NBA players.

James’ net worth is an incredible $480 million. And, needless to say, he’s also one of the highest-paid players in the NBA. 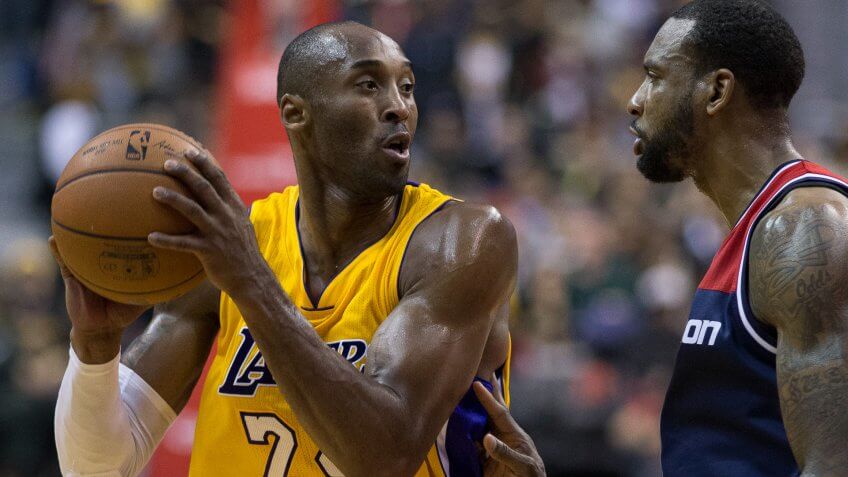 In November 2015 — about five months prior to his retirement — Forbes reported that Kobe Bryant had earned a total of $680 million throughout his career. About $350 million of that was earned off the court from endorsement deals with companies like Mercedes-Benz, McDonald’s, Sprite, Nintendo and Sony. Largest of all these endorsement deals, however, was the one Bryant signed with Nike.

Bryant first signed a four-year, $40 million deal with the athletic apparel company in June 2003 after being wooed away from Adidas. His signature Nike shoe racked up $105 million in sales in 2014. In 2017, Bryant received the “Michael Jordan treatment” when Nike awarded him with a line of new sneakers following his retirement.

Today, Bryant boasts a net worth of $500 million. 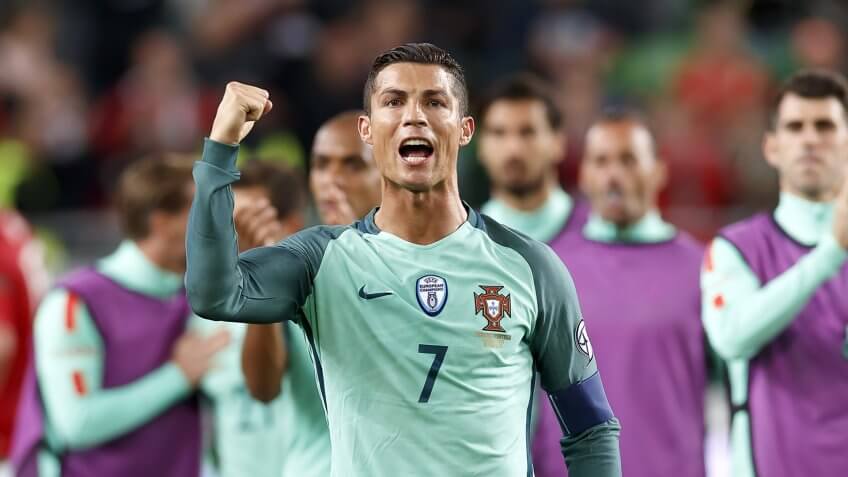 Soccer phenom Cristiano Ronaldo has so many endorsement deals, he’s been called a “walking billboard.” Among these are agreements with Tag Heuer, Abbott Laboratories, Herbalife and, of course, Nike.

In 2016, Ronaldo followed in the footsteps of LeBron James when he signed a lifetime contract with Nike. Prior to signing this new deal, Ronaldo first signed with Nike in 2003 and developed a collection that included footwear for men, women and children. His signature Nike Mercurial Superfly 360 Elite LVL UP SE FG cleat currently sells for $300 on the company’s website. Ronaldo has a net worth of $460 million. 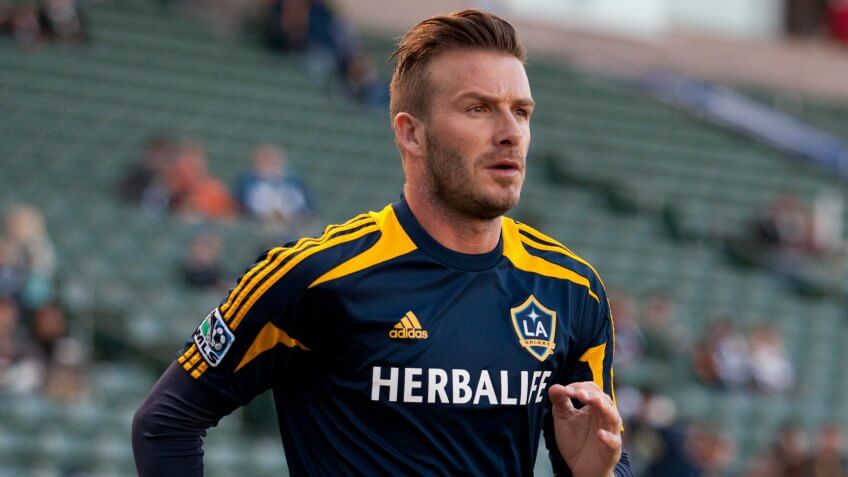 Like Neymar, Messi and Ronaldo, David Beckham enjoyed deals with a number of lucrative companies throughout his career. For example, Beckham earned $21.47 million as the global ambassador of Armani from 2008 through 2011.

Retired from professional soccer since 2013, Beckham continues to enjoy endorsement deals with Breitling and Diageo, among many others. In March 2015, Forbes reported that “in his first full year of retirement, Beckham posted the highest earnings of his career with $75 million in 2014.”

Adidas is Beckham’s largest endorsement deal. He signed a lifetime agreement with the company worth $160.8 million in 2003. David Beckham’s net worth stands at $450 million. 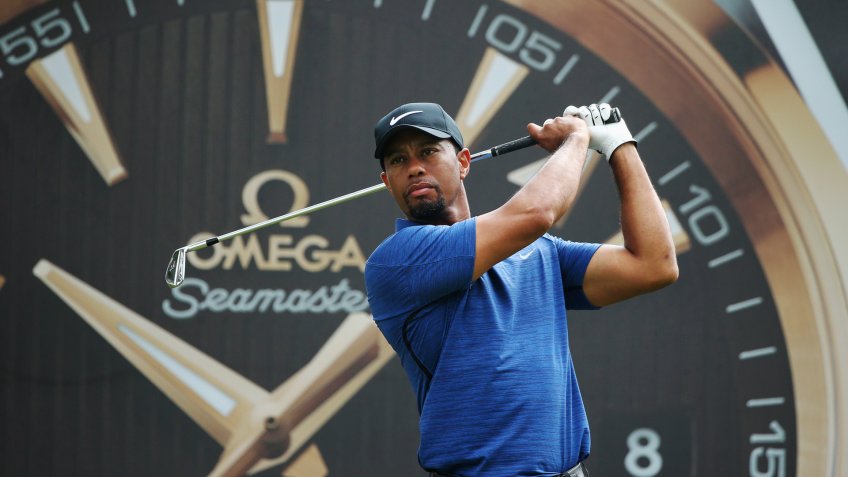 The golfer, who enjoyed a meteoric rise in the late ’90s, has endured declining public opinion in recent years. In 2009, Woods’ brand — not to mention his golf game — took a major hit after it was revealed he had cheated on his then-wife, Elin Nordegren, with multiple women. As a result of the scandal, Woods lost a number of huge endorsement deals, including deals with AT&T, Gatorade and Buick.

However, the golfer kept his endorsement deal with Nike. In fact, Nike extended its deal with the golfer in 2013. Woods’ relationship with Nike began in 1996 when he signed a five-year, $40 million contract, and he reportedly made $100 million from the company between 2001 and 2006.

In December 2016, Woods announced that he had signed a multiyear golf ball endorsement deal with Bridgestone.

Woods’ career and public image encountered another setback in May 2017 when he was found asleep in his car along a Florida road. Though he did not have alcohol in his system, Woods’ speech was slurred and he failed a roadside sobriety test. Woods eventually pleaded guilty and will now have to complete a 12-month probation program to avoid prison time. Despite this conviction, Woods’ major sponsors have stuck by him. His Masters win earlier this year definitely paid off for the sponsors that chose to stick around.

Woods currently has a net worth of $800 million. 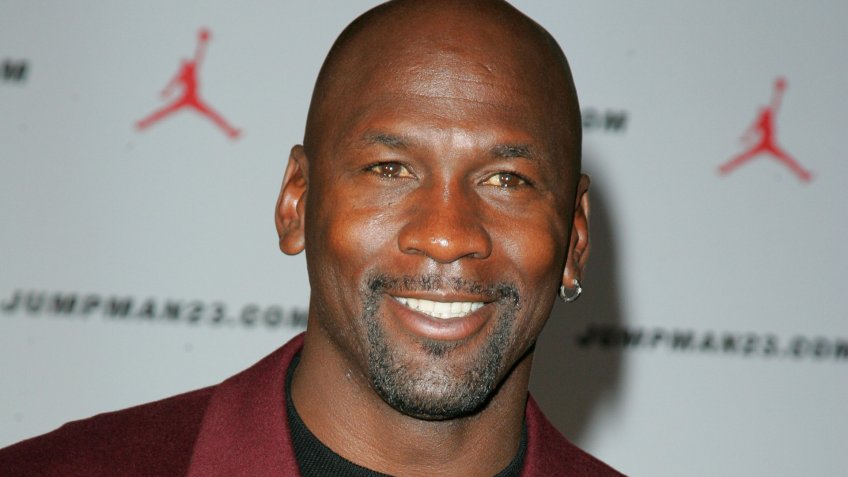 Imagine a world without the Nike Jordan brand. You’re not alone if you can’t do it. In many ways, the Jordan brand made Nike.

Michael Jordan’s original Nike deal was for five years at a mere $500,000 per year, plus stock options. According to ESPN, Jordan needed to sell $4 million worth of shoes by the third year of the deal. Incredibly, Nike sold $70 million worth of Air Jordan 1s in their first two months on sale in 1985.

Jordan’s deal with Nike greatly contributed to his estimated $1.9 billion net worth.

Chris Jennings and Ruth Sarreal contributed to the reporting for this article.

All net worths are accurate according to Celebrity Net Worth. 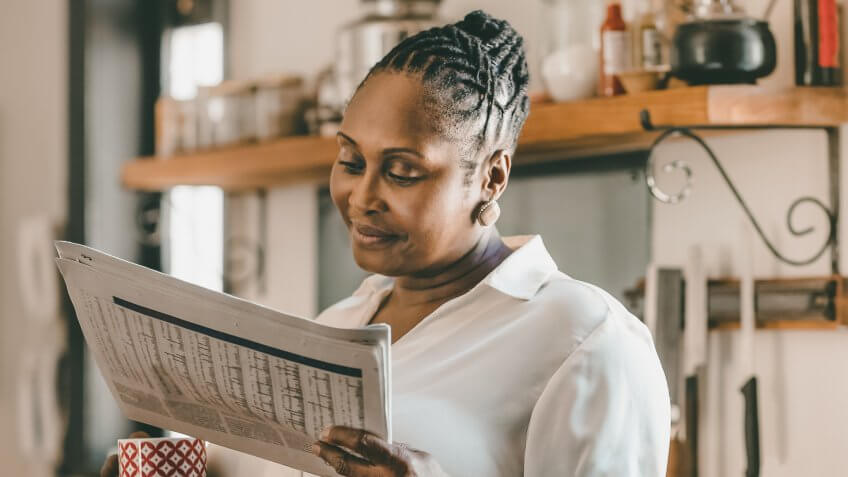 Good News, America, Your Paycheck Should Grow This Year

Here are four big reasons your pay might go up in 2020.