Nearly everyone looks forward to retirement. No more alarm clocks. No more stressful days at the office. When you hit your golden years, you’ll have time to spend doing whatever you want, whether it’s playing golf, traveling or just spoiling the grandkids. But, have you thought about where you’ll live in retirement?

In a recent survey, GOBankingRates asked over 500 Americans who are planning to move in retirement what they look for when deciding to relocate — their responses might surprise you.

The primary reasons people said they want to move in retirement were to have a change of scenery, enjoy better weather and be closer to family. Seventy-eight percent of respondents gave one of these reasons for relocating. A change of scenery and better climate were each named by 28 percent of respondents, whereas 22 percent would relocate to be closer to family. 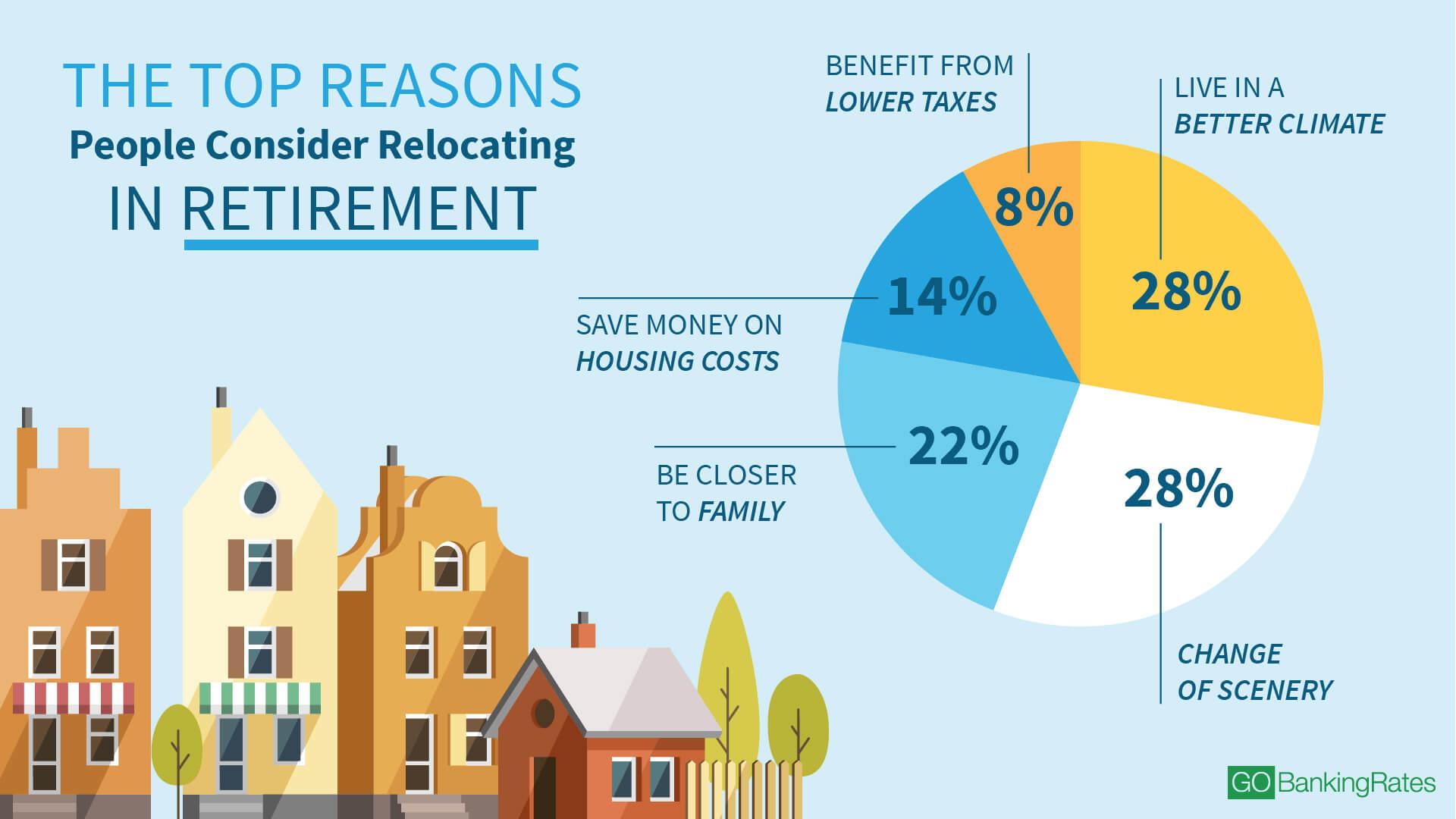 Age Insights: Seniors 65 and Over More Concerned About Saving Money When Relocating

Those in the 65-and-older age group were the most likely to want to move to save money, with 35 percent of those respondents giving this as their reason for moving.

Those aged 18 to 24 were the least likely to provide this response, with just 17 percent saying they would relocate to save money on housing costs. The respondents’ ages were positively correlated with the percentage of people who chose costs as their reason to relocate. Women and men named costs as their primary reason at nearly the same rate, at 21 and 23 percent, respectively.

It’s no wonder that older adults consider moving as a way to save money in retirement. Recent GOBankingRates research indicates that 21 percent of current retirees think that affording a high cost of living is the toughest financial hurdle in retirement.

The 8 percent of people who said they wanted to move due to high taxes might want to consider relocating to Alaska, Wyoming or Delaware, according to research that identifies the most tax-friendly states for retirees. Stay away from Nebraska, which has the highest taxes for retirees.

The West Coast Is the Best Coast for Retirement — or Is It?

When asked, “Which area of the country sounds most appealing for retirement?” 22 percent of respondents said the West Coast. The Southeast was preferred by 18 percent of respondents, the East Coast by 17 percent, and the Southwest and Midwest by 13 and 11 percent, respectively. Nineteen percent said they’d prefer to retire “anywhere in another country.” 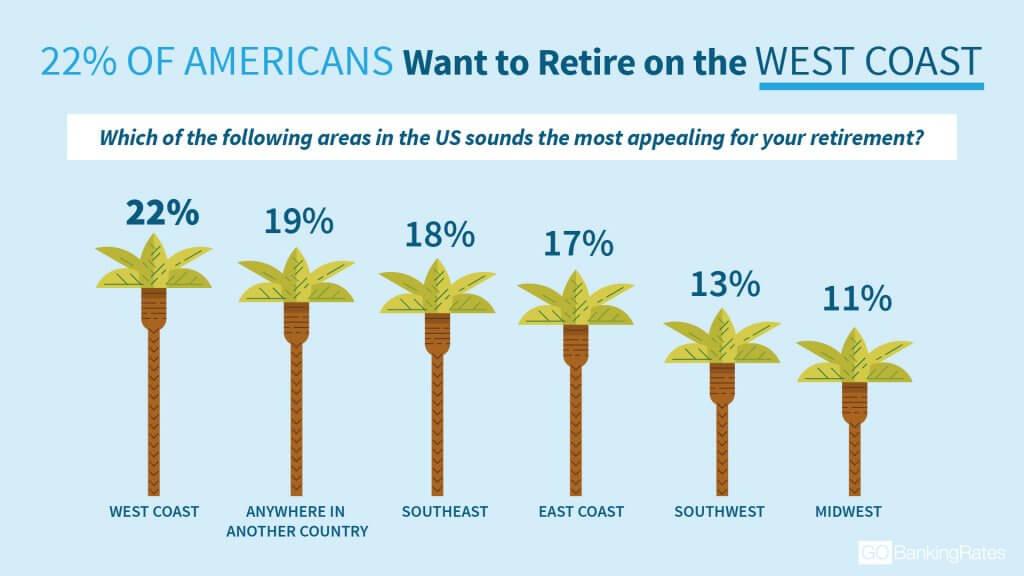 More women than men would like to go west, with 24 percent of women saying they’d like to relocate to the West Coast for their golden years, compared to 19 percent of men.

However, the West Coast might not be the best place to retire to if you’re concerned about costs — especially if you want to live in a major city. In a GOBankingRates study that identified the best and worst cities to retire rich, San Francisco; Fremont, Calif.; San Jose, Calif.; Irvine, Calif.; Honolulu; Oakland, Calif.; Los Angeles; Seattle; and San Diego all ranked among the 10 worst cities due to high living expenses.

Age Insights: Older Adults Prefer to Retire in the Southeast and Southwest Regions

Although the West Coast seems to be a popular retirement destination, adults ages 65 and older were more likely to choose the Southwest and Southeast regions as their top places to retire in.

Click to See: Best and Worst Cities to Retire Rich

The Ideal Retirement Location Has Beaches, Lakes and More

Nearly half (47 percent) of Americans say they want their retirement locale to have beautiful beaches, coastlines, lakes or other picturesque features. Quality, affordable healthcare and outdoor activities were each named by 16 percent of respondents as being desirable. 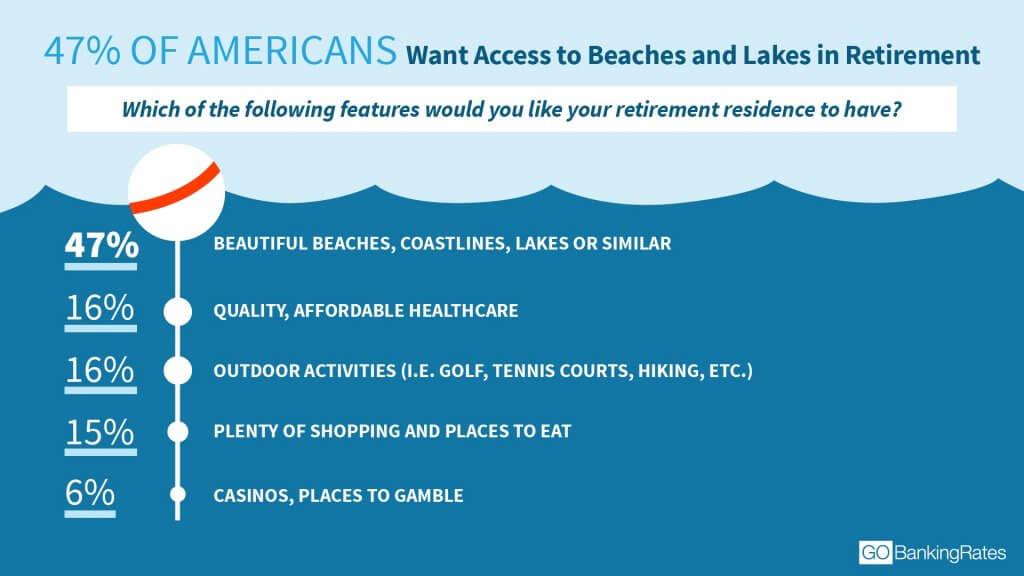 Nearby shopping and dining options were cited by 15 percent of respondents. Just 6 percent said they wanted their retirement community to have casinos or other places to gamble.

Age Insights: Adults Ages 45 to 54 Are More Concerned About Quality and Affordable Healthcare

Healthcare was more important to those aged 45 to 54 (31 percent) and over 65 (26 percent) in the survey. Only 10 percent of those aged 55 to 64 would relocate to find quality, affordable healthcare.

Paying for healthcare is the most difficult financial hurdle for retirees, according to GOBankingRates research, yet the percentage of people (16 percent) who named quality, affordable healthcare as being important to their retirement locale is surprisingly small. Fidelity Investments estimates the cost of healthcare in retirement for someone retiring today to be over $250,000, meaning that affordable healthcare should be a bigger priority in choosing where to live.

No matter the reason behind choosing to relocate in retirement, consider the financial impact your choice will have. Look at the cost of housing and taxes — and the cost of living in general — before you make the move.

Check out the data visualization below for an interactive picture of what different age groups want in their retirement: 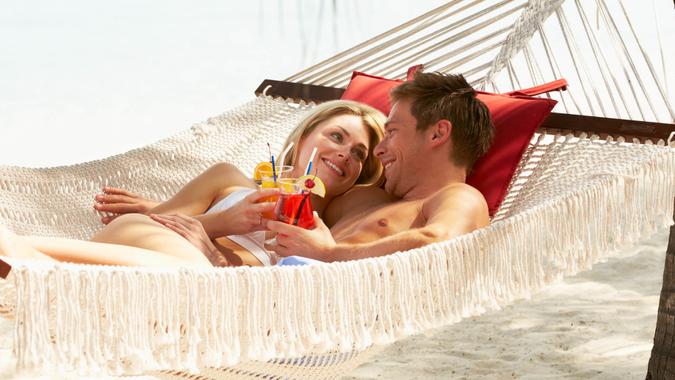 The Astonishing Reasons Many Aren’t Ready to Retire

Don’t let these roadblocks interfere with your retirement dreams