Social Security Taxes: What to Expect and How to Reduce Your Bill 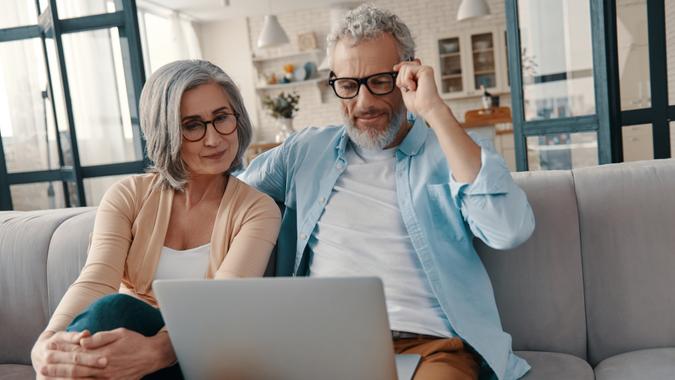 There’s a decent chance that many Social Security recipients will be paying more taxes on their benefits this year than in years past because of a confluence of events, a situation which might convince many of them to take steps to lower their tax bills in the future.

Social Security benefits are taxed based on provisional income and designated income thresholds. The more income you earn, the more you will have to pay in taxes. Many retirees face a higher tax bill this year because of the amount of provisional income they earned in 2021.

As GOBankingRates previously reported, provisional income is determined by adding the combined total of half of your Social Security benefits, your tax-exempt interest, and other non-Social Security items (such as jobs or investments) that make up your adjusted gross income.

For single tax filers, Social Security benefits aren’t taxed if your provisional income is less than $25,000. That rises to $32,000 if you’re married and filing a joint return. Up to half of your Social Security benefits might be taxable if your provisional income is $25,000 to $34,000 for single filers, or $32,000 to $44,000 for joint filers. Anything above those income levels, then up to 85% of your benefits could be taxable.

If your provisional income in 2021 pushed you above the thresholds, you’ll face a larger-than-normal tax bill this year. That could be the case with Americans who retired in 2021 as part of the Great Resignation and then started claiming Social Security immediately. In this case, the work income they earned last year will be included in their provisional income, which could move them above the threshold.

You might also pay more in Social Security taxes if you delayed your required minimum distributions (RMDs) in 2020. As MarketWatch reported, federal COVID-19 relief packages allowed Americans to waive their RMDs in 2020. That’s the amount of money you must withdraw from your retirement account each year if you haven’t already started to draw down those balances by age 72. If you delayed your 2020 RMD, you probably had to take out more money in 2021, which could put you above the threshold.

What can you do to lower your Social Security tax liability in the future? A good first step is to start planning ahead — including thinking about the income sources you can expect over the next five to 10 years, and how those sources might impact your provisional income thresholds.

One way to lower your tax bill is to opt for a qualified charitable distribution, or QCD, which lets you give your required minimum distributions to charity. QCDs are excluded from taxable income.

Another option is to convert your retirement savings to Roth accounts. Withdrawals from Roth 401(k) plans or IRAs aren’t considered part of provisional income calculations, Michelle Gessner — a certified financial planner and founder of Gessner Wealth Strategies — said. Before you make a conversion, however, it’s a good idea to consult with a qualified financial planner or tax preparer who can determine how much can be converted without pushing you into a higher tax bracket.