It’s easy to cut the cord with so many streaming services available to choose from. As if there weren’t already enough options to keep you entertained, Disney will start offering its films and original programming on the upcoming Disney+ service in November, and Apple is expected to launch Apple TV+ this fall. But, by subscribing to multiple services, could you be spending more money than you think?

GOBankingRates’ survey found that nearly half of Americans are paying for some sort of entertainment subscription. The most common service that respondents said they subscribe to is Netflix, followed by Amazon Prime Video and Hulu. Sling TV — an internet TV service that’s an alternative to cable — was the least popular, with just over 1% of respondents saying they subscribed to this service.

Survey Question: Which of the following entertainment subscriptions are you currently paying for? Select all that apply.

Faster broadband speeds and smartphones have fueled the growth of entertainment streaming services, according to a study by Deloitte Global. And, the number of services that households subscribe to is only expected to rise. These entertainment streaming services are often seen as a lower-cost alternative to cable TV, which a growing percentage of Americans have been ditching. According to TV ratings company Nielsen, 16 million households have cut the cord — an increase of 48% over the past eight years.

Read More: 7 Tips and Tricks To Cut Your Phone and Cable Bill in Half

But does ditching cable and switching to entertainment subscription services actually save money? Generally, the answer is yes. A Netflix subscription costs $12.99 a month, and so does an Amazon Prime membership. A Hulu subscription costs $11.99 a month for the ad-free version. Each service adds up to more than $100 a year, which is what you might pay every month for cable or satellite TV service, so there’s still a big difference.

However, you’re not saving money if you’re paying for a service that’s going unused. GOBankingRates’ survey found that many Americans aren’t using their entertainment subscriptions every day. About 9% of respondents said they use the services on a monthly basis. And, more than 4% said they never use the entertainment subscriptions that they’re paying for.

Respondents ages 25-34 were the most likely to be wasting money on entertainment subscription services, with more than 7% of people in this age group saying they never use their subscriptions. On the other hand, adults 65 and older were the least likely to be throwing away money, with only 2% of people in this age group saying the same thing. And, women were slightly more likely than men — a difference of half a percentage point — to say they don’t use the entertainment services for which they paid. 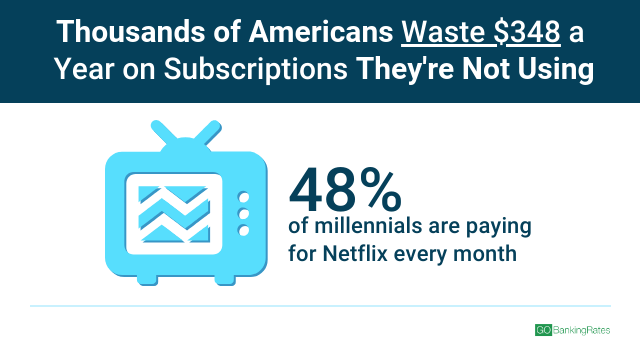 Other Subscription Services You Could Be Losing Money On

The survey found that Americans are much more likely to be paying for entertainment services than monthly subscription boxes or meal subscriptions. About 5% of respondents said they’re signed up for beauty or grooming subscription box services, the most popular of which were Ipsy and Dollar Shave Club, respectively. About 4% said they pay for a food subscription service, with the most common ones being Amazon Fresh and Blue Apron.

Find Out: How Much These Top-Rated Food Subscriptions Will Actually Cost You

How To Find and Cancel Subscriptions You Don’t Use

Subscription service fees might seem insignificant on an individual or month-by-month basis. But those fees can really add up over the course of a year — especially if you subscribe to multiple services — and put a big dent in your budget. So, in order to make sure you’re getting your money’s worth, it’s important to review the services that you’re paying for.

To do this, go through your credit card and bank account statements for recurring expenses, said consumer and money-saving expert Andrea Woroch. Here are some of Woroch’s tips for tracking down your subscription service charges:

Going through this process will you help you identify subscription services that you signed up for and might have forgotten about or aren’t using enough to justify the cost. “Sometimes you need to see it in black and white to understand what you’re spending and where you can cut back,” Woroch said.

For the subscriptions you use more frequently, look at the ones that offer similar services — such as Netflix and Hulu — to determine whether you can get by with just your favorite, and cancel the rest. “If you’re having a tough time letting go, just remember that you can always sign back up for service if you really miss it,” Woroch said.

If you don’t want to part with any of your services, find ways to cut the costs. For example, look for promotional deals by entering the name of the service and the term “coupon” or “promo code” in a search engine, Woroch said. You might also be able to get a better deal by negotiating with your service providers. Let them know you’re unhappy with your service and considering switching to a competitor. Or, ask your providers if they offer a discount for prepaying for a service rather than making monthly payments, Woroch said. Putting a little effort into getting better deals on the services you enjoy can pay off in the long run. 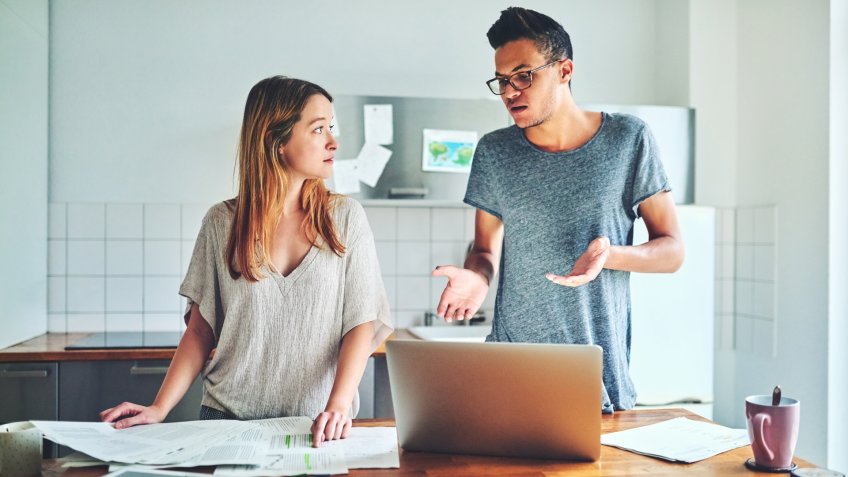 49% of Americans Are Living Paycheck to Paycheck

The savings rate of many Americans is precarious as well.