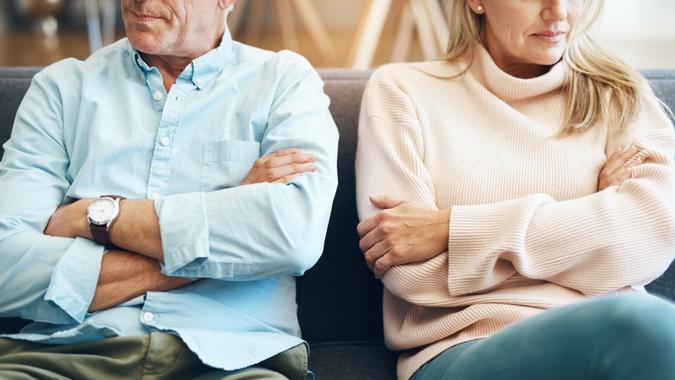 Financial problems plaguing a couple can rapidly translate into relationship issues: 54% of Americans believe that having a partner who’s in debt is a major cause for divorce per a new survey.

See: Jaw-Dropping Stats About the State of Debt in America
Find: I Use These 3 Foolproof Strategies To Avoid Credit Card Debt

The survey of 2,000 Americans — commissioned by National Debt Relief and conducted by OnePoll — found that about 60% of Americans have been putting off marriage to avoid inheriting their partner’s debt.

“It’s no wonder debt affects our mental health and vice versa,” the survey notes. “Being in debt not only increased their anxiety but also affected their retirement plans and marital status.”

Sandra Radna, divorce lawyer and author of “You’re Getting Divorced…Now What? The Ultimate Divorce Court Guide,” told GOBankingRates that in her practice as a divorce attorney, at least half of those she encounters are seeking divorce due to financial infidelity — or different views about how to manage money, or on how money should be spent.

“The decision to divorce is typically made after years of a couple arguing about their divergent views concerning money issues,” Radna said. “To prevent these issues, when considering marriage, discuss how and on what you’d like to spend money on as a couple, how much you would like to save and the level of financial transparency with which you are each comfortable.”

Discover: 11 Steps for Paying Off Credit Card Debt in 2022

Indeed, another SunTrust survey, conducted by Harris Poll, found that half of people say they handle spending and saving differently from their partner. Further, that survey suggested 35% of people who experience stress in their relationship blame finances.

Another potential cause of strife — as Radna mentioned — is financial infidelity, with nearly a third of couples having experienced it in their relationship per a survey from U.S. News & World Report.

“Financial infidelity covers a wide range of behaviors, including having secret credit cards or even lying about income. The element they all have in common is that one partner hides or withholds information about a money-related decision. When the victim uncovers the truth, there’s often a feeling of betrayal. In a way, it’s similar to the fallout from romantic infidelity,” the survey notes.

Learn: Is Paying Off Debt or Bills With Your Tax Refund Good for the Economy?
Explore: Debt & Mental Health: The Hidden Ways Owing Money Affects Your Life

It’s worth noting that in the United States, about 50% of married couples divorce, the sixth-highest divorce rate in the world, according to World Population review. Money issues are among the top three reasons for divorces (22%), according to a U.S. Census Bureau survey, as GOBankingRates previously reported.