Omicron Update: COVID Variant Spread Triggers Thousands of Flight Cancellations – Should You Ask For a Refund? 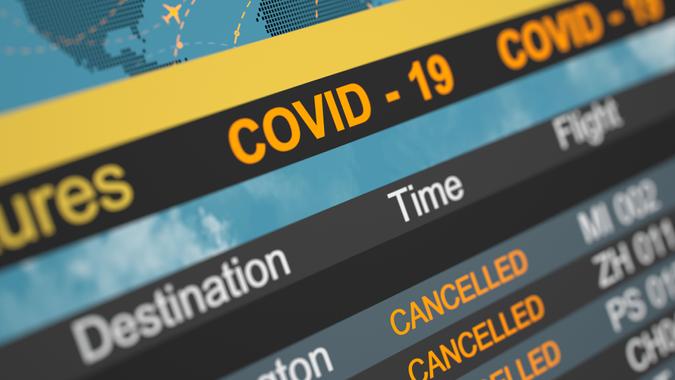 The Omicron variant is wreaking havoc on the airline industry, as thousands of flights continue to be canceled partly due to staff and crew testing positive, in the midst of the busiest time of the year for air travel, leaving travelers stranded.

There were 16,019 delayed flights and 3,275 canceled flights globally, with 1,517 of these being flights canceled within, into or out of the U.S. on Dec. 26., according to flightaware.com.

An airline trade group has asked the Centers for Disease Control and Prevention to shorten the recommended isolation period for fully vaccinated employees who test positive to a maximum of five days, from 10 days, before they can return with a negative test, The New York Times reports.

“Swift and safe adjustments by the C.D.C. would alleviate at least some of the staffing pressures and set up airlines to help millions of travelers returning from their holidays,” Derek Dombrowski, a JetBlue spokesman, told the New York Times.

The cancellations come at the busiest time of year for air travel. The U.S. Transportation Security Administration said it screened millions of people each day over the holiday weekend, peaking at 2.19 million travelers on Thursday, Dec. 23. On Wednesday, more people passed through TSA checkpoints than on the same day in 2019, CNN reports.

CNN reports that United Airlines said last week it had to cancel hundreds of flights because it lacked enough crew members to safely fly all of its scheduled routes.

“The nationwide spike in Omicron cases this week has had a direct impact on our flight crews and the people who run our operation,” according to a United memo obtained by CNN.

However, if your flight has been canceled, the airline owes you a refund as the Department of Transportation (DOT) regulations entitle you to one, according to The Washington Post.

But there’s one caveat, according to The Washington Post: accepting the canceled flight, getting your money back and starting from scratch may put you in a position of scrambling for a more expensive flight, if you can find one at all. Then there’s the risk that your new flight may be canceled or delayed. You may want to reschedule a new flight with the airline instead of going for a refund.

In addition, travelers should also expect long waits for refunds, as they have been flooded with requests for months, pushing the DOT to crack down on wrongful denials and investigate delays in payment, the Washington Post adds.

And if your flight gets significantly delayed, you are entitled to a refund, per DOT regulations, however, every airline has a different definition of “significantly,” the Washington Post warns.