What Is an Annuity and How Does It Work? 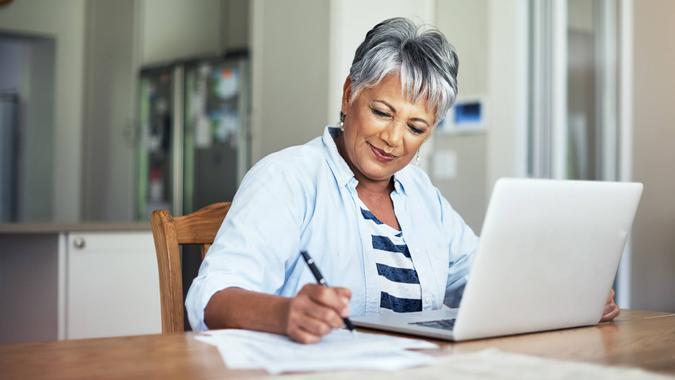 An annuity is a financial product that pays out a fixed amount in a series of payments. Annuities are popular — and polarizing — financial products designed specifically to provide guaranteed income.

Numerous types of annuities are available, as well as different options and contractual terms that can impact outcomes. You’ll want to consider each of these features before committing to an annuity contract. Prospective annuity buyers should also consider the suitability of these vehicles as they relate to financial goals and needs.

What Is the Purpose of an Annuity?

The primary function of an annuity is to remove longevity risk for retirees. Many people are frightened by the prospect of outliving the money they accumulate during their working years. As the average lifespan increases and the number of pensions decreases, this fear has become a real problem for financial planners.

More than ever, people are forced to rely on personal savings and investments to generate cash flow for basic needs in retirement if they don’t want to make major life changes, such as getting housemates or moving to a less expensive area.

The situation is exacerbated by fears that the Social Security system won’t have enough money to cover future generations that retire. Annuities, therefore, can be useful tools to transfer longevity risk from individuals to insurance companies. Even with their apparent advantages, however, annuities also have potential downsides that might make them unsuitable for certain people.

How Does an Annuity Work?

Annuities create contractual obligations among up to four parties:

Payment amounts in the distribution phase are based on the annuitant’s life expectancy.

Annuities are divided into two phases:

There are several common distribution structures. The life option provides guaranteed regular cash payments for life, thereby eliminating longevity risk for the annuitant. This option can also be structured as a joint-life option, which provides payouts for the longer-living of two spouses, though at a lower monthly amount than it would be with a single life option.

A certain option triggers payouts for a defined amount of time — even if the annuitant passes away before that period is reached. Annuity assets can also be distributed in lump sums.

What Happens to the Money in an Annuity When You Die?

Insurance companies usually return the capital contributed to the beneficiary if the owner passes away during the accumulation phase. There are also contract provisions that will pay a defined death benefit to survivors or pay out the remaining account values to beneficiaries.

Some distribution options continue to pay surviving spouses or beneficiaries upon the passing of the annuitant, whereas some annuities cease to provide income upon the death of an annuitant in the distribution phase of the product. Prospective buyers should consult the specific product and carrier to determine the right match of features before purchasing.

Take a look at some of the types of annuities that might be options for you.

Fixed annuities are offered by life insurance companies and are contracts in which a policy owner contributes a certain amount of capital to an account. The insurance company makes a contractual guarantee that this capital will grow at a specified rate of return over time. In turn, the annuitant will be entitled to a set amount of periodic income during the distribution phase.

Contributions can be made once or numerous times over the accumulation phase, while distributions can start immediately or at some point in the future. Fixed annuities are primarily designed to provide a modest growth vehicle that is insulated from the volatility of equity and bond markets, and to provide guaranteed income in retirement.

Variable annuities share numerous features with fixed annuities, but they differ notably based on capital appreciation and future income payments.

Variable annuities do not offer the guaranteed growth rates of fixed annuities. Instead, contract holders can access these accounts by allocating contributed funds across equities, bonds, money market products and mutual funds.

When the contract enters the distribution phase, the insurance company will provide guaranteed income based on the asset levels achieved in the capital subaccounts.

Prospective buyers of variable annuities should be aware that the value of their assets in these products can decline when market conditions deteriorate, so they might not be ideal solutions for people worried about losing money in an annuity.

An indexed annuity is another type of annuity contract that blends characteristics of fixed and variable contracts. These products pay interest rates dictated by security indexes such as the S&P 500.

The annuities mentioned above can also be classified as immediate or deferred.

Immediate annuities provide a guaranteed stream of income directly following a lump sum payment to the insurance company. This compresses the accumulation phase to a single contribution, with the distribution phase starting immediately.

Deferred annuities push the distribution phase out into the future, allowing one or multiple contributions to grow during the accumulation and investment phase.

These products are often structured as tax-deferred vehicles. They allow gains on the account to compound without any tax liability until qualifying withdrawals are made beyond retirement age.

The questions below might be some of the things you’re wondering about in regard to annuities.

What Are the Benefits of an Annuity?

Prospective annuity buyers should consider the advantages and disadvantages of these products and the suitability for their financial needs. One of the benefits is that annuities can be safe financial instruments for people worried about market or longevity risk. Those seeking tax deferrals can also benefit from annuities that accumulate tax-free, with only distributions in retirement being subject to income tax.

What Are the Disadvantages of an Annuity?

Annuities have some drawbacks as well. For one thing, you sacrifice liquidity for capital that is contributed to these products. While most annuities have a surrender value that allows contract holders to recoup assets they’ve contributed, these often carry surrender charges or, in the case of tax-deferred annuities, penalties paid to the IRS.

Annuities are often maligned for their high expenses — and with good reason. Variable and indexed products are often marketed or positioned as alternatives to mutual funds and other securities because they provide upside exposure, and the performance of subaccounts is directly correlated to market performance.

While these products are meant to mimic the performance of traditional investment accounts, they often do so in a less efficient manner. Fees tend to be higher in these accounts, both in the form of commissions to advisors and in internal fees for the management of subaccounts.

Cost is only an issue in the absence of value, but outcomes from variable annuities can often be replicated at lower expenses.

Can You Lose Money in an Annuity?

Fixed annuities are considered relatively safe assets. As outlined above, they offer contractual guarantees from insurance companies and account values only increase over time.

Fixed annuities are only at risk of loss if an early surrender carries charges and penalties, or if the insurance company becomes insolvent. Even in the case of insolvency, there is an industry organization designed to provide protection to account holders that insures up to $250,000 of present value.

Variable and indexed annuities are subject to the same risks, but they also carry market risk and could theoretically lose value if there is poor performance from the subaccounts they are designed to track.

Are Annuities a Good Investment?

Retirees who have accumulated sufficient assets to generate ample cash flow from interest and dividends are often able to self-insure against longevity risk. When assessing the merits of annuity products and how they might fit into your financial plans, you’ll want to consider all of the above features with respect to your own needs and goals.

As with all investments, doing research in advance is essential. What works for one person may not be the best fit for the next. Annuities can be a bit complex. While they can be a good way to guarantee tax-deferred income, there may be better alternatives. Meeting with a fee-only financial planner who is not purely motivated in selling you a financial product could be helpful to create a retirement plan that works best for your goals.

Here are the answers to some commonly asked questions about annuities.

Cynthia Bowman contributed to the reporting for this article.