Notorious GME: GameStop on Track for 200% Gain this Week 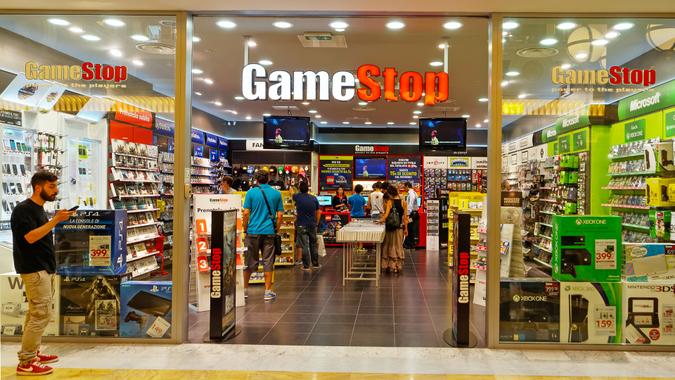 GameStop shares are finishing the week soaring again, being up 11% at $120 in midday trading, seemingly mimicking last month’s trading frenzy that led to Congressional hearings.

See: GameStop Redux: Shares are Soaring Again
Find: Did GameStop Happen Because of COVID-19? How 2020 Sparked a Retail Investing Craze

The spike can be attributed to various factors, including Reddit users who are hyping the stock once again and the resignation of the company’s chief financial officer announced earlier this week.

Bank of America Securities analyst Curtis Nagle said in a note today that there appeared to be a “very tight correlation between the number of conversations on Reddit related to GME and trading on platforms such as Robinhood as well as overall share volumes,” according to MarketWatch. “The most recent data suggest that retail investors seemingly are again driving GME shares,” Nagle said. “However, one distinction from the spike roughly a month ago is it appears that short covering is much less of a factor.”

See: GameStop Stock Has Crashed and Burned – How to Recover If You Went All In
Find: GameStop Investors Could Be in for a Tax Surprise

Last month, retail traders on the subreddit group WallStreetBets, who were intent on taking down hedge-fund short sellers by buying shares of stocks that didn’t seem to have much of a chance of success, sent stocks, including GameStop, soaring (and then crashing).

The market volatility has brought the attention of regulators, and last week, Robinhood CEO Vladimir Tenev testified before Congress to address the market frenzy that ensued when the app halted trading of certain stocks, including GameStop, that are popular on the Reddit subthread.

See: Robinhood CEO Vlad Tenev Grilled for Five Hours in Congressional Hearing
Find: After GameStop, Regulations Are Coming for Wall Street – But Will They Reign in Everyday Investors Instead?