Why Is AMC All Over the Place? What You Need to Know Before You Invest — or Sell 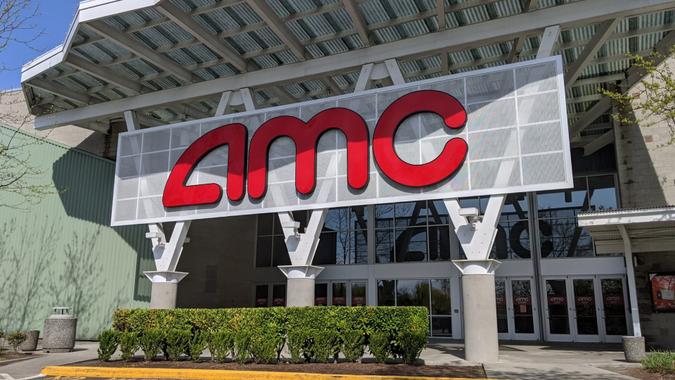 The most recent contender in the meme stock wars, AMC has seen its share of peaks and troughs this week with a whopping increase of nearly 120% and an all-time high of $62.55.

The most recent increase was largely driven by a new rewards program that includes a free large popcorn. The day after reaching this new high, AMC announced plans to sell 11.55 million shares and sent the stock tumbling. The shares sold for an average of $50.85 and closed at $55 yesterday. The prices might not seem that wild considering other stocks sell for hundreds of dollars, but to put it into perspective, AMC increased 400% in the past month alone.

Yahoo! Finance reports that Macquarie analysts have reconfirmed their $6 price target and neutral rating on AMC in early afternoon trading last Thursday. While there is optimism for a post-pandemic rebound for box-office in general, analysts remained concerned about the company’s balance sheet overall. For reference, the cost of a movie ticket at an AMC theater is about $14, making the company’s stock value less than half the cost of one of its tickets to see a film.

It is not difficult to justify a drastically lower valuation compared to current market price. AMC’s best-ever full net profit earnings was in 2016, with $111.7 million — long before the pressures of COVID-19 brought the industry to a full stop. Business Service News reports that operating cash flow stagnated as the company was forced to spend more and borrow more to grow its sales. AMC’s current market capitalization of about $25 billion is 225 times the company’s best-ever net profit. In a year when movie theaters virtually shut down full operations due to a global pandemic, this just doesn’t make sense.

See: Watch Out for These Stock Sell Offs
Find: Hedge Funds Stand Their Ground Against r/wallstreetbets in Latest Showdown

The uneven tilt in AMC’s balance sheet was driven by a 400% short squeeze in January, making Wall Street history. Shorting a stock essentially means betting that the stock will decrease in price. Hedge funds and professional investors placed large bets against AMC amidst the pandemic and news of declining profits. Reddit forum r/wallstreetbets, in an attempt to “save” the beloved theater chain, urged its followers to start buying the stock en masse to rally its price. They succeeded and six months ago caused AMC to surge to heights that no one  anticipated. This caused short sellers — investors who had already bet against AMC — to rapidly get out of their bets and cut their losses. This is called a “squeeze” because of the immense and sudden pressure put on a group of investors to sell.

Short sellers are forced to buy back borrowed stock to close out their “short” position in a squeeze. The rapid buying only fuels the rally further, as was the case with AMC. The Reddit forum’s goal was to force these investors out of their short positions in order to minimize “negative” positions towards the company. They succeeded, but as Macquaire analysts pointed out, they have now created an incredibly over-inflated price that will eventually have nowhere to go but down.

Interestingly enough, though, even after news of AMC’s stock selloff last week, short sellers maintained their positions. Although they were forced out of their positions in January, Wall Street seems to have adapted to a new offensive strategy in tackling the meme traders and is doubling down on its short bets.

The percentage of outstanding shares sold short edged higher last week to top 20%, and as the stock doubled again on Wednesday, short interest only slipped below 19%, according to Bloomberg. This is even after short sellers lost approximate $1.2 billion in the same period.

The standoff between Wall Street and Reddit has intensified recently, as neither side seems to be backing down. But time is never quite on the side of short sellers because any sudden market movement could force them out of their positions. Despite Wall Street’s staunch stance on the short side, Forbes is already claiming that after last week’s surge, AMC is ripe for another squeeze.