In The Hunger Games, District 9’s industry is grain. This district’s industry isn’t explicitly stated in the books — which only say the district has factories — but is revealed on the official website.

Neither the two tributes in the books’ 74th nor 75th Hunger Games are named.

There are many varieties of grain; several of the most common ones are wheat, corn and barley. Grains are primarily used to make various foods, but are also used to produce other products, such as ethanol.

For this investment series, I could consider grain as an agricultural end-product, and use the “Farm Products” industry classification from which to choose the two stock tributes. I could also consider grain as an ingredient in food products, and choose stocks from one of the food industries, such as “Food-Major Diversified.”

Given the books state this district has a factory or factories — which implies processing — and given District 11’s industry is agriculture, I’m going to consider grain as an ingredient in food products.

The Food-Major Diversified industry (according to Morningstar, which provides industry classification data to many financial entities) is comprised of 14 stocks. The heavyweight here is Kraft Foods (KFT); other familiar names include Heinz (HNZ) and Dole (DOLE).

For some previous districts/industries, I limited the entrants to stocks with market caps above a certain minimum. I’m not doing that here, as there are only 14 stocks in our industry universe.

I chose the top stock based upon past performance and potential for promising future long-term performance. A similar (but opposite) rationale was used to select the poor stock.

New York City-based Crumbs Bake Shop (CRMB) is a retailer of cupcakes in the U.S. As of November 14, 2011, it had 45 locations, including 31 in the New York metro area; 6 on the West Coast; 3 in Washington D.C.; 1 in Virginia; and 4 in Chicago. The company was formerly known as 57th Street General Acquisition Corp. and changed its name to Crumbs Bake Shop, Inc. in October 2011. The company was founded in 2003, and went public in mid-2010.

The stock chart above shows the dangers of buying an IPO — especially of a company that is not profitable and has no barriers to entry (meaning there’s nothing to make it difficult for competitors to set up shop and compete, as no intellectual property (IP) is required, nor are start-up costs prohibitive).

Some may argue that Starbucks’ situation was the same. However, there are key differences. Firstly, coffee has been proven to have staying-power, while cupcakes could be just a short (and sweet) fad. Secondly, the market for coffee must be considerable larger than the market for cupcakes. If you’re a coffee drinker, as I and about half your fellow Americans are, you know there is no substitute for coffee — only coffee will cut it! However, if you’re craving a sweet — there are no shortages of sugary-foods available.

Granted, cupcakes are currently hot, especially as more upscale party treats. But, in general, the upscale market — which is more health-conscious — is not going to be gobbling cupcakes down on a regular basis. Besides, who wants a cupcake when they could have chocolate, and get a dose of feel-good endorphins? Not me — and I’d venture to say that I’m in good company.

I could eat these words, as the company and its stock could do well going forward. That said, there are just too many currently good stocks out there to waste money on one which hasn’t yet proven it can deliver the goods. 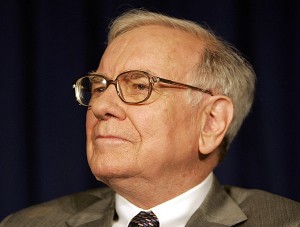 The 5 People Who Made Warren Buffett