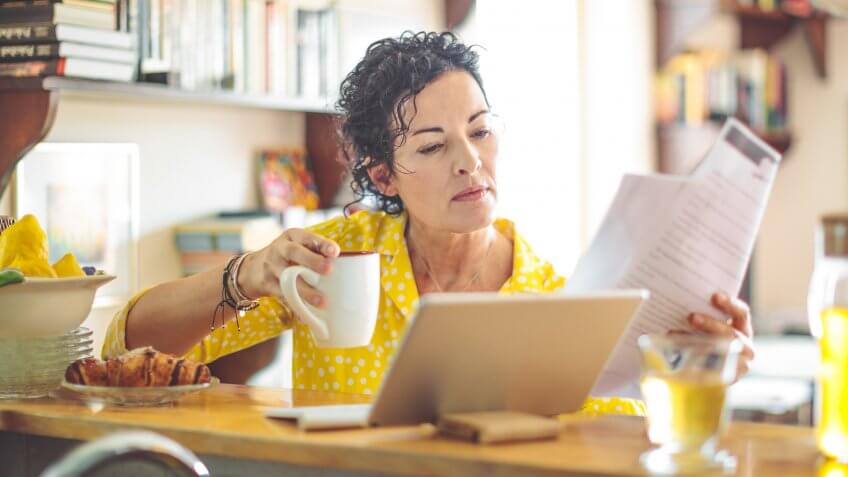 Which of these factors — from fear that events like a downswing will wipe out their hard-earned dollars to a simple lack of enough of those hard-earned dollars — plays the most prominent role in keeping more people from investing? That’s the question at the core of this new survey from GOBankingRates, which asked over 500 people who aren’t investing why they’re taking a pass. The survey asked those people who said they didn’t invest why they aren’t, what they might need to change before they would, what age they think people should begin investing and what types of investments they understand the most and least about.

“Lack of investing for one’s future is, unfortunately, common,” said Andrew Aran, chartered financial analyst and partner at Regency Wealth Management. “Far too many people lack the basic understanding of budgeting, discipline and how powerful compounding interest is regarding spending or investing.”

Click through to find out exactly why many Americans aren’t investing — and why they should. 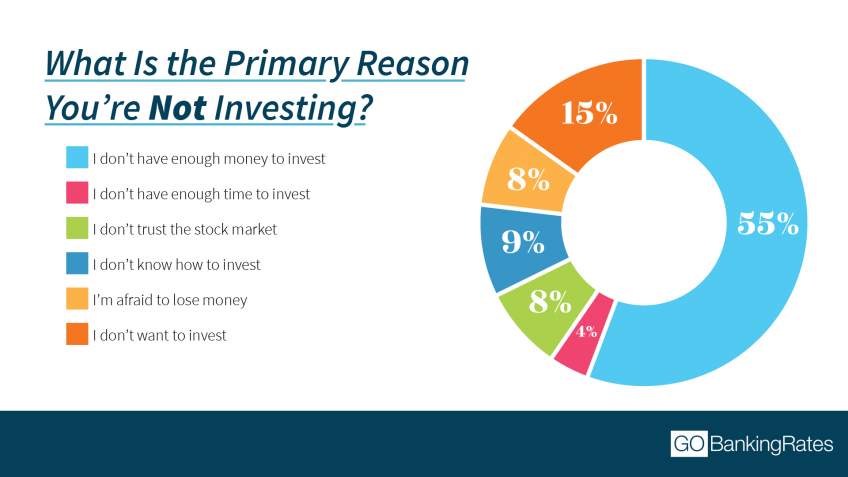 What Is the Primary Reason Americans Aren't Investing?

The primary reason survey respondents gave for why they aren’t investing is because they simply can’t find room in their budget to do so — that’s what more than half of respondents said. Just 9 percent of people answered that they didn’t understand how to get started, indicating that higher wages and/or better budgeting would appear to be the bigger issue than financial literacy. However, the belief that you need a large income to start investing is a misconception.

“Beginning to invest can seem like a high hurdle to climb,” said R.J. Weiss, CFP at The Ways to Wealth. “Especially considering most experts recommend a savings rate of at least 10 percent. That number can be hard to swallow for those living paycheck to paycheck. A good message for beginners to hear is that it’s OK to start small — even if it’s saving only 1 percent of their income.”

In some ways, the most troubling result was the 15 percent of respondents who said they simply didn’t want to invest. This indicates a lack of understanding about the essential role investing should play in your financial life. 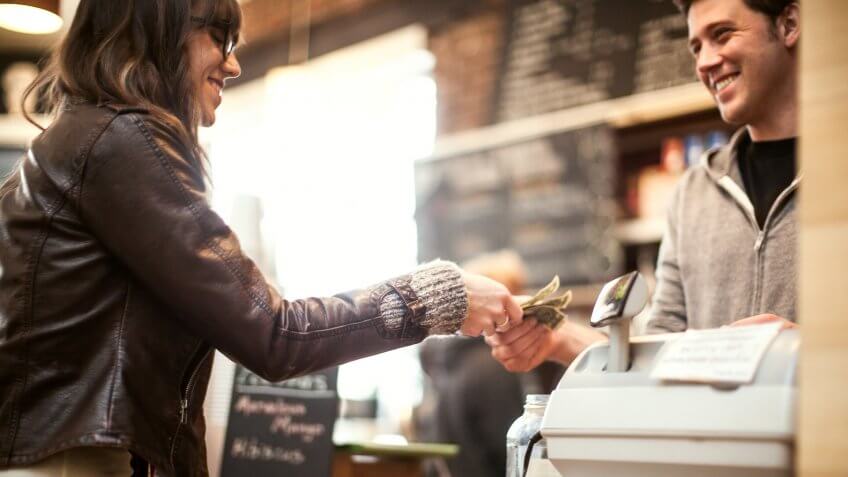 Younger Americans Have the Cash, but Not the Know-How

One potentially surprising result becomes apparent when you filter the responses by age. The survey results show the youngest age groups are actually much less likely to complain that they don’t have the cash, indicating that getting an early start investing might be more possible than some realize.

What’s keeping them from investing, then? While a lack of investing knowledge wasn’t as common across the board, it would appear to be a bigger issue for younger people. Almost one in four of those surveyed in the 18-24 group and one in eight in the 25-34 group said they lack the necessary knowledge to start investing. That answer falls to just 5 percent of responses for the 35-44 group and stays at similar levels among the older respondents. 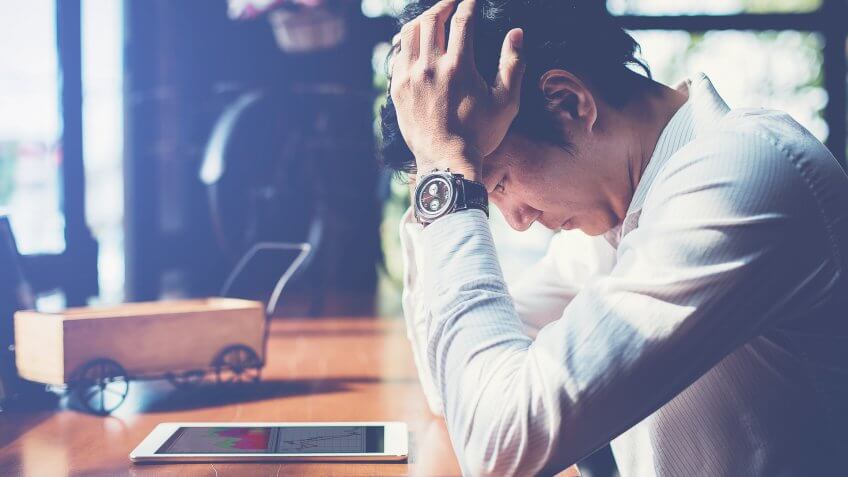 Men Are Significantly More Afraid of Losing Money Than Women

While the differences in most responses by gender were typically small, one result stood out: Men were more than twice as likely to say that they weren’t investing out of a fear that they would lose money.

Just 5 percent of women were avoiding investing because they didn’t want to lose money, but that figure was 12 percent among male respondents. It’s unclear what’s causing the men in this survey to be more concerned about losing money, but it is worth noting that the other major difference was that men were twice as likely to answer that they didn’t think they would have the time to manage their investments. 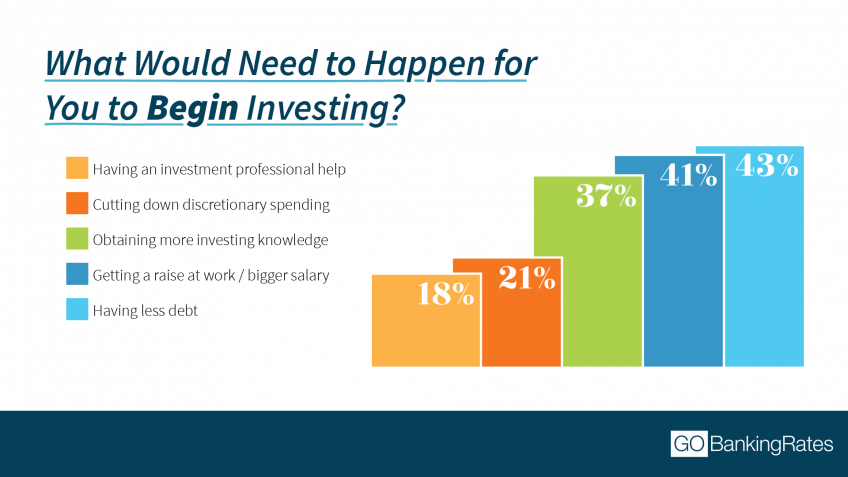 What Would You Need to Happen for Americans to Begin Investing?

“While it may be true that most household budgets cannot leave much room for investing, the actual practice could be a valuable step towards financial freedom and responsibility,” said Lex Sokolin, global director fintech strategy with Autonomous Research. “A number of micro-investing services — from Acorns to Digit in the U.S. — have developed a low friction way to save a few dollars per month using automation and AI. Investing is all about cumulative returns, so even a small amount growing into a travel goal or a purchase over several years can be an instructive experience.”

About one in five of those polled answered that they would also want to cut down on discretionary spending and/or have an investment professional to help them pick investments. The fact that even the least-selected responses still garnered 18 percent of responses would also appear to indicate that many respondents felt it was a combination of issues keeping them from investing. 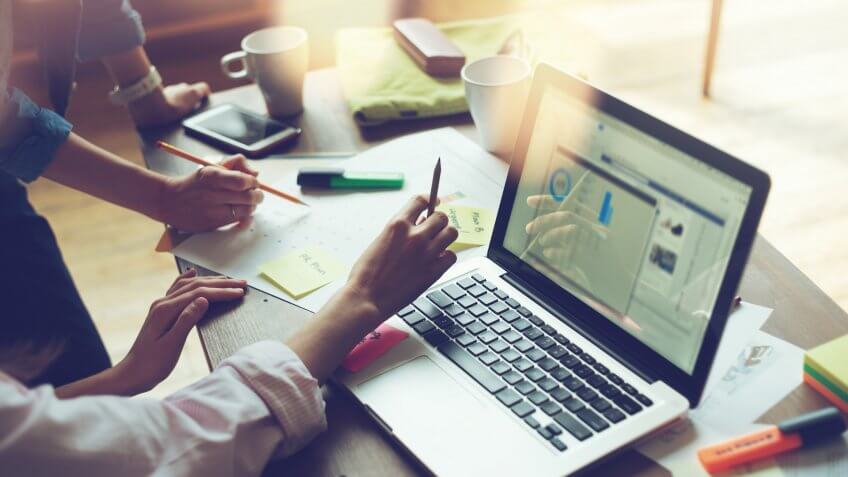 While there was a significant drop in the number of people from the lowest age group (18-24) to the rest saying that they needed more investing education, the proportion of Americans who did believe they needed to learn more before they started — over a third of respondents — remains pretty steady from people’s mid-20s to their mid-50s.

That would appear to indicate that issues with financial literacy and a lack of investing knowledge are not limited to younger Americans but are actually persistent, ongoing issues that can continue to follow people well into middle age and later. 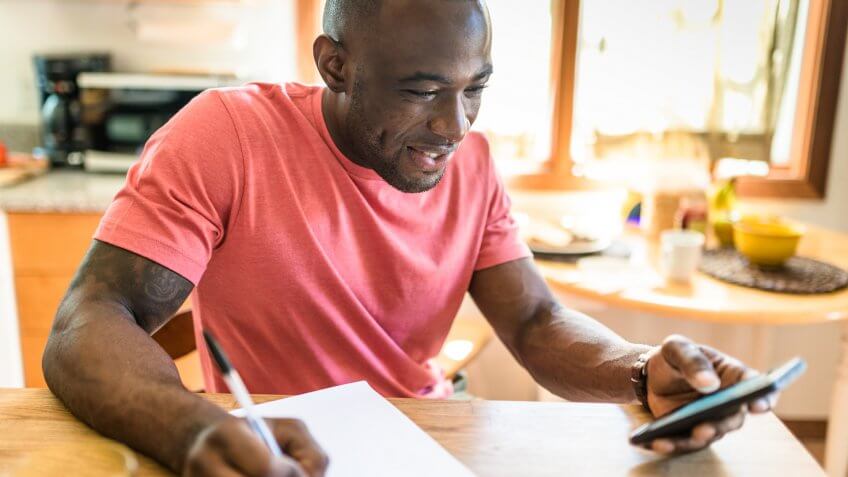 Men Need to Spend Smarter so They Can Invest

Men and women differed the most in answer to the question, “What would need to happen for you to begin investing”: cutting down on their discretionary spending. While 19 percent of women felt like they were spending too much and that was what was stopping them from investing more, that rate rose to nearly one in four among men.

Building a budget you can actually stick to is an essential first step to any investment plan, so those American males do appear to have some catching up to do when it comes to living within their means. 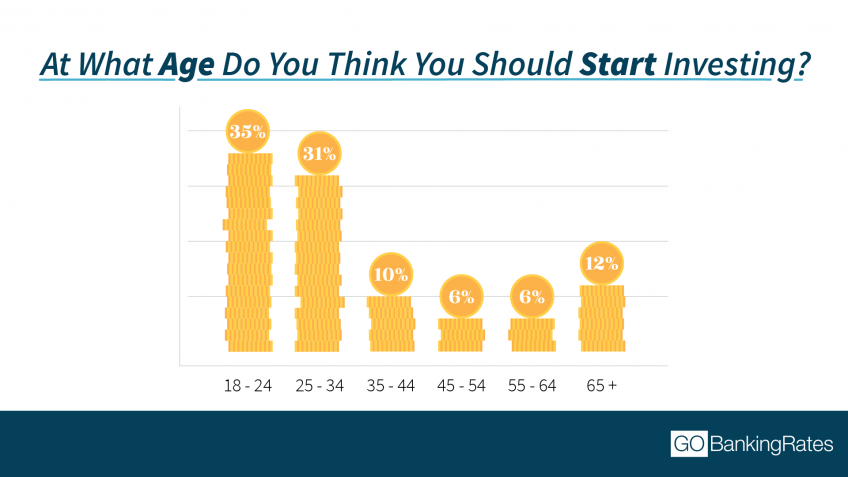 What Do You Think Is the Best Age to Start Investing?

The results to this question would seem to indicate that the vast majority of people who aren’t investing still understand that starting early is the way to go — something that reinforces the conclusion that it’s a lack of funds that’s really standing in most people’s way. About a third of respondents — 35 percent — said that you should start investing while aged 18-24 and another third or so said that 25-35 was the right age with no other response getting more than 12 percent.

It’s troubling, though, to see that the third-highest response was age 65 and older. The fact that over one in 10 people in this survey believed you should put off investing until retirement would appear to demonstrate a fundamental misunderstanding of how investing can benefit them. The goal should be to invest early and reap the benefits in retirement. It’s easier to save for retirement than you might think. 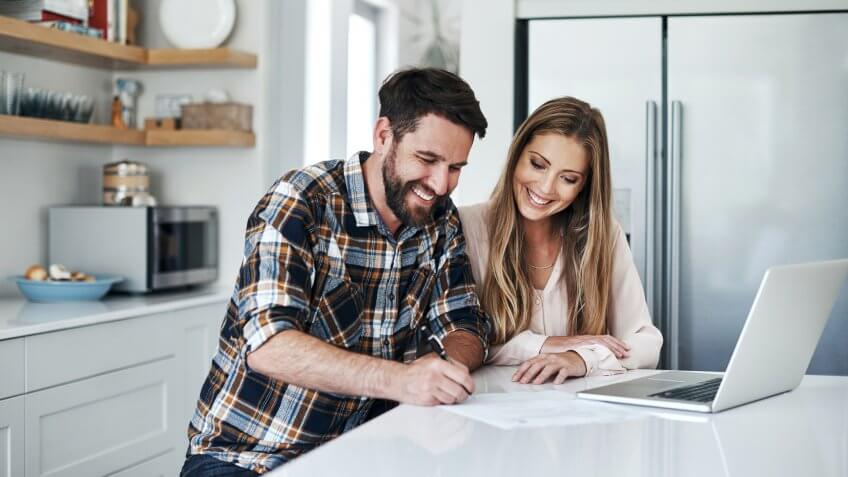 Americans Always Look to Put Off Investing Until Later in Life

It’s never too late to start investing, but it is very easy to let a lack of understanding push you to keep putting it off. 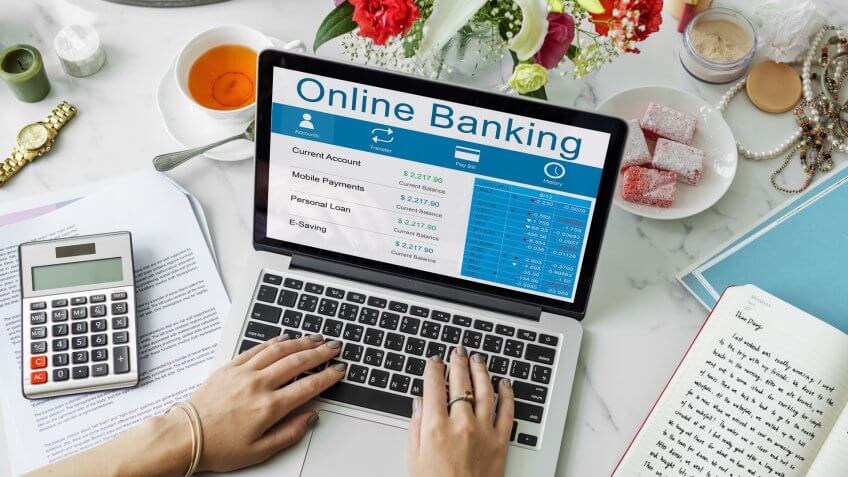 While both men and women saw 18-34 as the best age to start investing, one time period where the genders diverged was in the group that selected 35-44. Women are over 50 percent more likely than men to say their mid-30s to mid-40s is the time to get started investing.

While your late 30s is probably later in life than would be advisable to begin, women were slightly less likely than men to answer any of the older age groups. Remember, the later you begin investing, the less time you have for compound interest to work its magic. 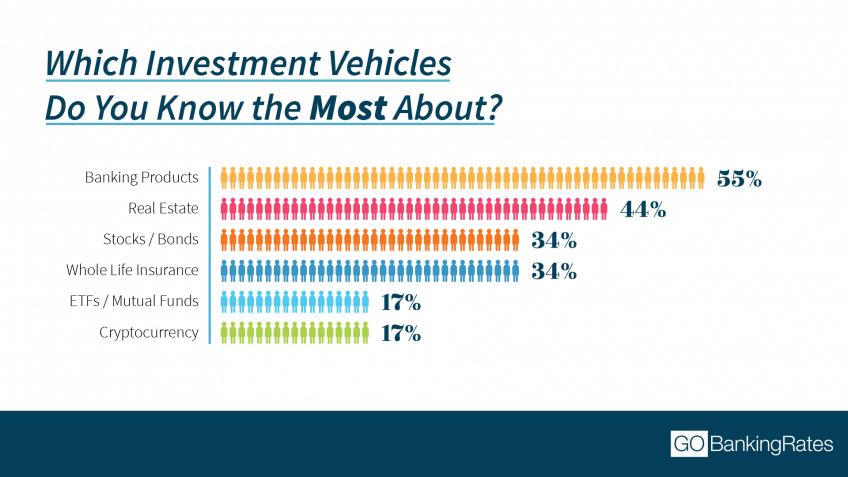 What Investment Vehicles Do You Know the Most About?

When asked to score their knowledge of different financial vehicles on a scale of one to six — with one indicating most knowledgeable and six the least — Americans who aren’t investing were most confident in their knowledge of banking products. Over half the respondents said that bank accounts are what they know the most or the second-most about.

Real estate, stocks and bonds, and whole life insurance got the lowest scores after banking products. Cryptocurrency, though, was least likely to be what people understood, followed by ETFs and mutual funds. This is surprising because ETFs and mutual funds represent an ideal entry point to investing. 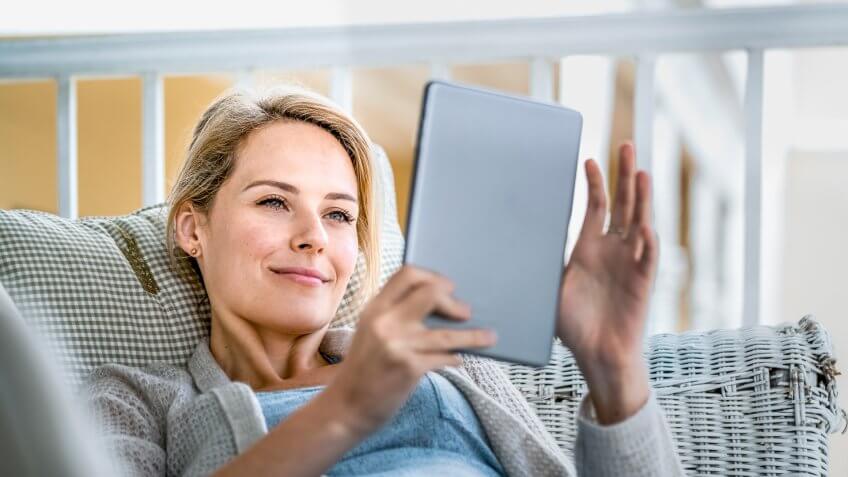 There isn’t much difference between the age brackets when it comes to understanding banking products — across all groups, it was the investment vehicle people knew the most about.

Comfortability with investing in real estate appears to sync with buying a home. While the 18-24 and 25-34 age brackets don’t know as much about real estate, more respondents do beginning at age 35, when more people have purchased their first home. 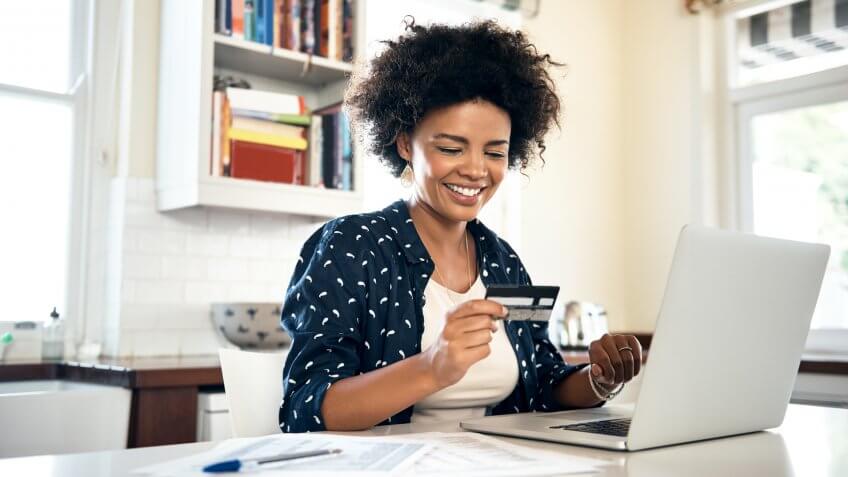 Women appear to be more confident about their understanding of various types of investment vehicles than men. Banking products received an overall average score of 2.53 (with 1 being “know the most about”) from women, while men scored it a 2.87. Real estate got a 2.93 average score, while men scored it 3.03. Stocks and bonds were scored 3.14 by women but 3.19 by men, and whole life insurance was scored 3.46 by women and 3.55 by men. 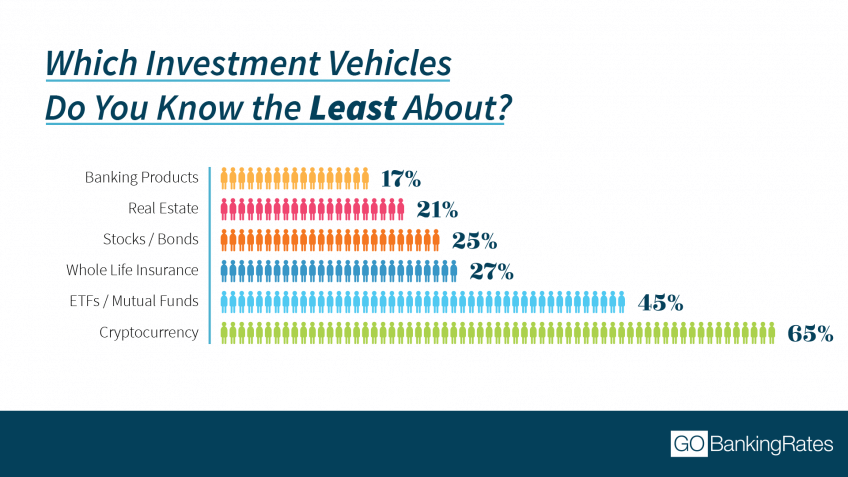 ETFs and mutual funds were consistently among the areas of investing that respondents had the least knowledge of. That’s especially concerning when you consider that these products are the most ideally suited for novice investors. They provide a simple way to get broad, low-risk exposure to the stock markets. The average score for ETFs/mutual funds was 4.05, second only to the 4.61 scored by cryptocurrency. 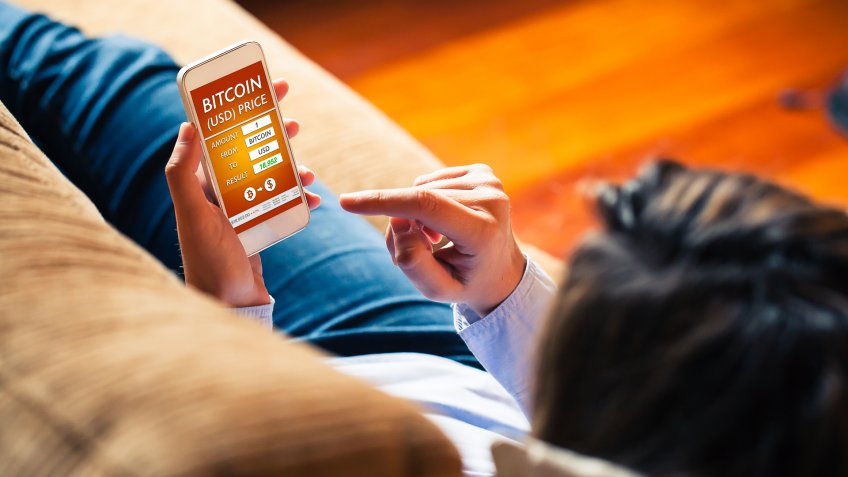 No Age Group Is Especially Confident About Cryptocurrency

While the younger age groups definitely showed more confidence in their understanding of investing in cryptocurrencies, even the 18-24 group still gave an average answer of greater than four. And while the 65-and-older group was clearly the least comfortable, their average answer of just under five is still relatively close to those non-investors still in college.

On the whole, it paints a picture of people still being uncomfortable with the idea of buying cryptocurrency, regardless of their age. 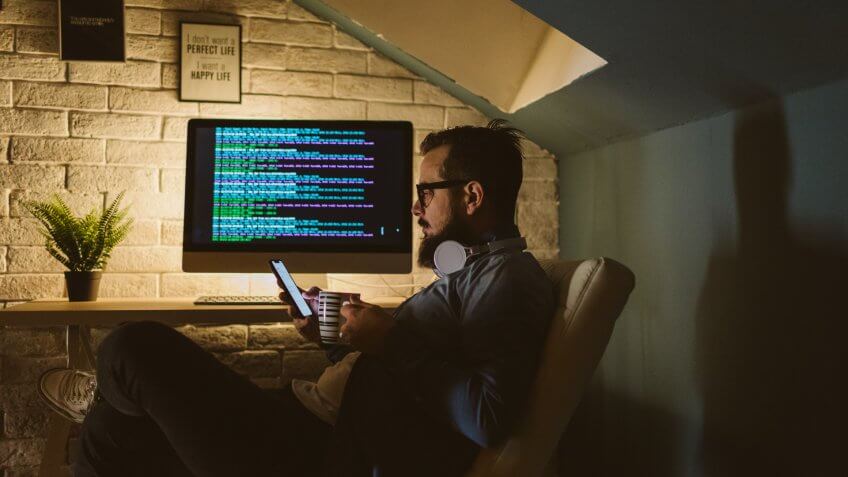 The two categories that received the lowest average scores from respondents also showed some significant divides between men and women. Men showed higher confidence in their understanding of cryptocurrency than women, even if they were still the least knowledgeable in that method of investing. Men scored cryptocurrency with an average of 4.39, compared to women’s 4.82.

As for ETFs and mutual funds, men had an average score of 3.98 compared to 4.12 for women. In both cases, it would appear that men were more willing to express some confidence in their knowledge of the more complicated investment vehicles than the simpler ones, where women consistently rated their knowledge higher.

Methodology: In a survey conducted by Survata, GOBankingRates asked the following questions: “Are you currently investing your money (not including retirement accounts i.e. 401k, IRA etc)?”; “What is the primary reason you’re not investing?”; “If you were to invest, at what age do you think it would be the best to start investing?”; “What would need to happen for you to begin investing?” and “Which investment vehicles do you know the most to least about?” The survey ran from Sept. 13-17, 2018 and had a sample size of 508 people. 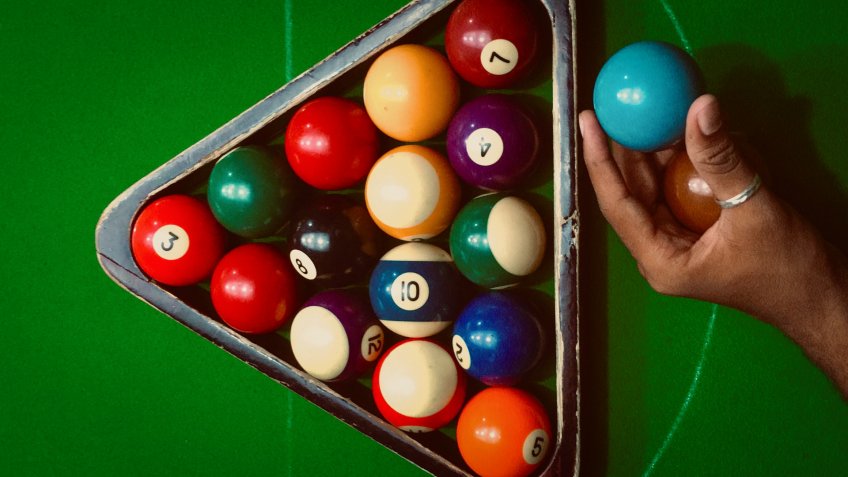 13 Investing Rules You Should Break

The best ways to invest money have been evolving.