Nadya Suleman, the world’s most well-known mother of octuplets, has a new venture — and it’s not what you think. She’s not stripping for the cameras, or even a magazine spread. She’s pushing a lending website.

That’s right. Ms. Suleman has dedicated her life, or at least a portion of it, to helping people find the best payday loans on the market. How does her new website work? Can it really help people, or is it just another shady loan service? We say it’s the latter.

Nadya Suleman and Her Controversies

Nadya Suleman has had quite a few moments in the limelight over the past few years, but her headlines didn’t come solely from giving birth to only the second set of surviving octuplets in the United States. She’s also caught attention for being a single mother of octuplets, who already had six additional children, was unemployed and lived on public assistance programs.

Even more shocking was her multiple children did not arrive naturally. Instead, she became the mom of multiples through in vitro fertilization (IVF).

Since giving birth to her last eight children, she has publicly sought ways to earn money, including an attempt to become a reality TV star and posing semi-nude the U.K. magazine Closer.

Many people have had a very difficult time taking the mother of 14 seriously since she reached the public eye, which makes it even more difficult to believe her latest venture is real.

Octoloan is a service that helps individuals connect directly with lenders who offer short-term personal loans, more commonly known as payday loans, in the area.

Just to be clear, Suleman has not financed the site (obviously). Instead, the Octomom endorses it because, according to the website, “If anyone knows financial hardship Nadya does.”

By applying through the site, you may be connected with a lender who can “help you during an unexpected emergency,” such as “car repair, food, credit card bills, rent, travel, or whatever you need it for.” Octoloan.com makes a point to state that the loan is not designed to be a long-term financial solution, but “can be more affordable then over draft charges from you bank.” (Note: the typos came from the website).

When examining the sign-up process, it became apparent rather quickly that interested borrowers will need to enter their very personal information right away.

On the home page, you type in the dollar amount desired, zip code, name and your e-mail address. Then, by agreeing to the privacy policy and terms of use, and clicking “start now,” you are taken to a page that shares a “check”  filled in with your name and the dollar amount you plan to request.

Underneath the check are sections requesting your personal information (name, address, driver’s license, etc.), employment information and banking data (routing and account numbers). All of this information is required to process your application.

If you choose to pursue an Octoloan, it’s important to know that the maximum you can borrow is $1,000. However, the site notes that first-time loans are typically in the $300 to $500 ballpark. Also, you must have a job (or receive regular income), make at least $800 a month, be 18 years or older and have a checking account.

And costs? According to the site, a loan of $100 for 14 days could cost $25 (APR of 651.79 percent), but varying loans amounts and time frames could result in different fees.

Payday Loans Endorsed by Octomom: Are They Legit?

One thing many people want to know is whether submitting applications on the Octoloan site will result in legitimate payday loans (as legit as a payday loan can be, that is).

It’s really hard to tell. So far, Octoloan has not been linked with the Better Business Bureau. While no complaints have been filed, the company has no rating from the bureau. The name Octoloan appears to be trademarked by Leedz Co., LLC, which also is not found in the BBB database.

But one important piece of information to share from this website is: “The operator of this website is not a lender nor broker, agent or representative to lenders. We do not make cash advances or credit decisions.” It really makes you wonder just who the “operator” is, and what they actually do.

There’s no proof out there that Octoloan.com is a scam, but like any other online site that requests personal information, it’s extremely important that you proceed with caution.

Also, keep in mind that there are other ways to get your hands on quick cash, aside from high-interest payday loans. For one, consider looking into small bank or credit union personal loans. Also, peer-to-peer loans have become popular choices for individuals looking for money with lower interest rates.

Additional options to consider are asking creditors for more time to pay bills, borrowing from friends or family or looking into local emergency hardship programs. None of these options charge the interest payday loans do, and there is no risk of identity theft from using obscure online lending sites. 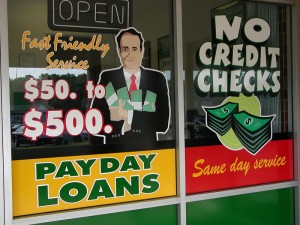 7 Ways to Get Quick Cash Besides Risky Payday Loans