SpaceX Could Hit $127 Billion Valuation With New Round of Funding 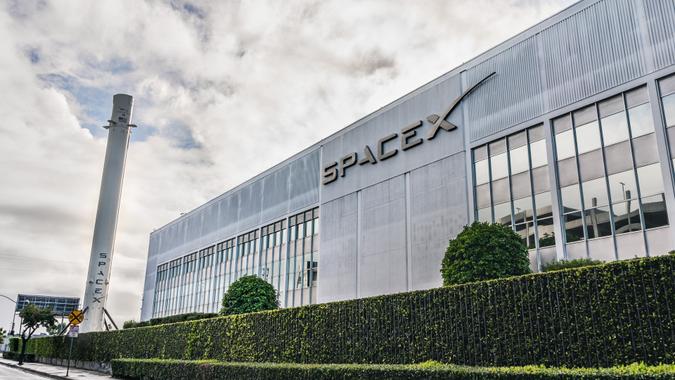 Elon Musk’s SpaceX company is looking to raise a new round of $1.7 billion in funding, which would bring its valuation to $127 billion, according to CNBC.

See: Elon Musk Wants to Slash $44 Billion Twitter Deal by 25%
Find: Elon Musk’s Net Worth Has Dropped $49 Billion As Tesla and Twitter Stock Continue to Slide — Should You Sell Your Stocks?

The company’s goal of $1.7 billion in new funds would bring the price to $70 a share — a 25% increase — according to a company-wide email obtained by CNBC.

SpaceX had an agreement with new and existing investors to sell up to $755 million in stock from insiders at $560 a share, which increased the company’s valuation to $100.3 billion, a 33% increase from SpaceX’s previous valuation of $74 billion at $419.99 a share in February when the company had raised nearly $1.2 billion.

This latest funding round would make SpaceX the highest valued U.S. startup on record, according to Bloomberg, which valued the round at $125 billion.

At the same time, SpaceX is conducting a secondary sale to employees, at the same price. Bloomberg reports that companies commonly conduct them in conjunction with a regular funding round.

The company conducts these often, to enable long-time stockholders to sell equity, as SpaceX remains private more than 20 years since its founding, CNBC added.

In December, Musk, speaking remotely at the Wall Street Journal’s CEO Conference, said that it had been difficult to develop Starship — the next-generation vehicle the company plans to use to take humans to the Moon and Mars, as GOBankingRates reported at the time.

Starship “absorbs more of my mental energy than probably any other single thing,” Musk said at the time, according to Bloomberg. “It is so preposterously difficult, there are times where I wonder whether we can actually do this.”

POLL: Do You Think People Should Invest in Crypto?
Discover: Following Tesla, Musk’s SpaceX and Starlink Hike Prices Due to ‘Rising Inflation’

And in November, Space Explored reported an email Musk sent to employees in which he said that “what it comes down to, is that we face a genuine risk of bankruptcy if we can’t achieve a Starship flight rate of at least once every two weeks next year.”