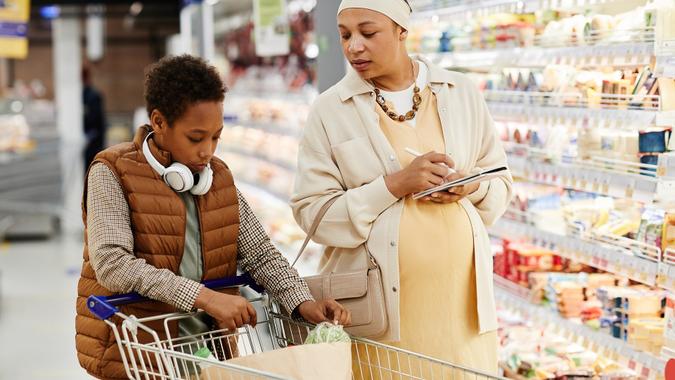 With inflation at a 40-year high, consumers have been limiting food purchases and are changing their grocery habits, a new CivicScience report finds.

Discover: 5 Best Foods To Buy in Bulk at Costco This Spring
More: How Much is Volodymyr Zelenskyy Worth?

For the week ending April 8, CivicScience finds that a staggering 93% of grocery shoppers have noticed higher than usual prices, with price increases being most noticeable for meats (80% of those polled took notice of meat prices), produce (69%), and dairy products (68%). As prices become noticeably higher to consumers, shopping behaviors at grocery stores are also beginning to shift — over half of grocery shoppers are looking for sale items more than they usually would.

Indeed, CivicScience notes that most consumers have stopped themselves from purchasing certain grocery or fast food items in the last month. The survey notes that 38% of those polled said they were buying store brand items, 24% were using coupons, and 23% shopped at discount grocery stores.

Respondents are more likely to refrain from purchasing items at a grocery store (69%) than they are to refrain from eating at a fast food restaurant (51%), but in both instances a majority said they had cut down their spending.

These findings are perhaps unsurprising as world food commodity prices made a significant leap in March — up 12.6% from February — representing their highest levels ever. The continued inflationary pressure may be at least partially come as a result of the Russia-Ukraine war, which spread shocks through markets for staple grains and vegetable oils according to the Food and Agriculture Organization of the United Nations (FAO). These market prices were also 33.6% higher than those recorded in March 2021, the FAO said, as GOBankingRates previously reported.

In terms of inflation concerns, the percentage of those polled who feel “very concerned” rose to 59% this week, reaching a new high point. At the same time, about 87% of fast food patrons have noticed increases on menu items at quick-service restaurants recently, driving down their intent to visit.

Gas Prices: How Much the Average Trip to the Grocery Store Costs You Based on Current Rates

On a positive note, concerns about being in public spaces declined again, and comfort resuming normal activities increased this week for all measured areas. Comfort in returning to work showed the highest increase via the survey results, followed by comfort with going out to eat.