With the partial government shutdown in its third week, federal employees such as David are starting to worry about their own financial future. The federal judiciary employee — who asked to use only his first name in order to protect his job security — has been told that he will get a paycheck this Friday and might get one on Jan. 25.

But if the shutdown continues beyond that point, David might have to work without pay — just as thousands of other federal employees will. If that happens, he could be struggling to make ends meet. “I don’t think I could go very long without a paycheck,” David said.

How the Government Shutdown Has Affected Employees

The shutdown began Dec. 22, 2018, when a government spending bill didn’t pass because of disagreements over funding for a border wall that President Donald Trump wants. As a result, the departments of Agriculture, Commerce, Homeland Security, Housing and Urban Development, Interior, Justice, State, Transportation and Treasury were left unfunded.

About half of the 800,000 employees who work in these departments have been furloughed — that is, put on unpaid leave. But David is among the federal employees who must continue to do their jobs because he works for the federal court system, which is constitutionally required to operate. “As a court employee, you are expected to show up to work even if you’re not getting paid for it,” he said.

Find Out: Services That Aren’t Available in a Government Shutdown

Thanks to filing fees and court costs the public pays, the federal judiciary has enough funding to continue paying employees a few more weeks — if it operates on a very lean budget. David said the court system has instructed all employees to do everything they can to minimize spending — no work travel, no contracting of outside services, not even any repairs to facilities or equipment.

But given that Trump has said he’s willing to continue his fight for funding for a border wall, David said he’s worried the shutdown could last for a while and he won’t get paid.

“I feel like I could last at least a month, maybe two with just what’s in my bank account,” he said. “I’d have to be very thrifty for two months and minimize all spending — just basically pay my mortgage and essential food.”

How Long This Federal Employee Can Stay Afloat Financially

Normally, David wouldn’t have enough extra cash to keep himself afloat for two months. But he said he got money from his parents for Christmas. He also made $500 to $600 by selling furniture and other items he no longer needs because he is selling his house and moving into a rental. Because he’s in transition, though, he’s paying both rent (with a roommate) and a mortgage. He also has monthly credit card payments he has to make, a car payment and an alimony payment.

Find Out: When to Use Your Emergency Fund

David said he’s trying not to worry too much about whether the shutdown will continue and if he’ll have to work without pay, but he is taking steps to bolster his finances. He has some items he was considering donating to charity but will likely try to sell them.

David also has sent a letter to his mortgage company letting it know that he might have trouble making upcoming payments. “I’d rather it be in the works now than wait until I can’t make a payment,” he said. “I’m trying to think ahead.” He also plans to reach out to the federal credit union that issued his car loan to ask if he could defer payments or lower his monthly payment if the shutdown continues.

David also plans to apply for another job that he’s found with his state’s court system. “If Trump is committed to shutting down the government for a year or until the next election, I know I can’t stay in federal service,” he said. “I don’t have that big of a buffer.”

David doesn’t want to leave his current job because he likes working for the federal government and with the people on his team. Plus, he said he has a lot of projects he’s working on that he doesn’t want to walk away from and have to dump on his colleagues.

But David has been through other government shutdowns, which is prompting him to think seriously about switching jobs even if this shutdown ends soon. “I don’t want to be on the shutdown merry-go-round,” he said.

For now, though, he just hopes Trump and Congress come up with a solution soon so federal workers won’t have to go without being paid. “I don’t know how long you not let people work,” he said.

Keep reading to find out why the government shutdown is bad news for your tax refund, too. 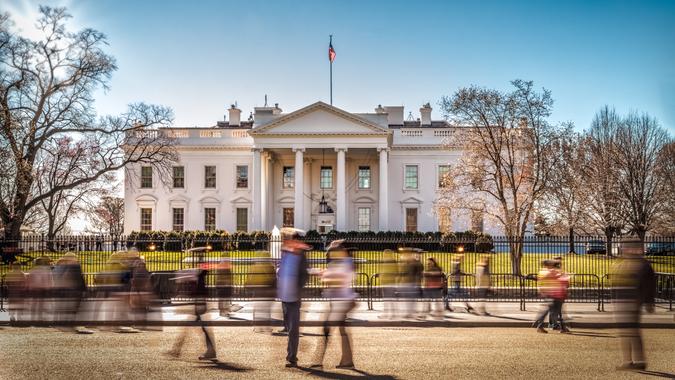 Take a look at the U.S. economy since Trump was inaugurated.

> Money > Economy > As the Shutdown Drags On, One Federal Employee Reveals His Real-Life Money Woes