Nearly Half of Jobs Will Remain Hybrid or Remote Post-COVID, New Survey Says 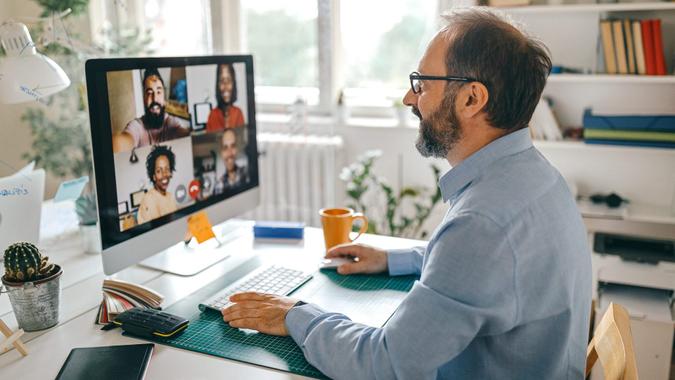 The COVID-19 pandemic might one day come to an end (hopefully), but remote working arrangements that gained favor in 2020 and 2021 due to the pandemic won’t, according to new business-related surveys from WFH Research.

See: The 26 Highest-Paying Jobs That Let You Work From Home
Find: Accelerated Hiring, More Remote Work and 3 Other Major Changes Experts Predict for the Job Market in 2022

Post-COVID, about 30% of U.S. workers will have “hybrid” arrangements where they split time between the work site and home, and about 15% will be fully remote. That’s according to a WFH report titled “Why Working From Home Will Stick” that was released on Jan. 19, 2022.

A separate report from WFH — called “The Work-From-Home Outlook in 2022 and Beyond,” also released in January — found that the percentage of remote work being projected is even higher when you count the total number of work-from-home days. According to that report, work from home will account for nearly 28% of full paid working days after the end of the pandemic, up from 20% at the start of 2021.

The reports were based on surveys and research conducted by Jose Maria Barrero of the Instituto Tecnológico Autónomo de México, Nicholas Bloom of Stanford University, and Steven Davis of the University of Chicago. Before the pandemic, researchers found that work-from-home arrangements accounted for about 5% of U.S. paid full workdays, Bloomberg reported. That percentage ballooned above 60% in the spring of 2020. It has held steady at a little bit more than 40% since May 2021, though it likely rose this month due to the persistence of the omicron variant.

Meanwhile, remote work expectations continue to change among employees. As Bloomberg noted, last spring workers who were surveyed said they expected to work from home on 21% of workdays. By December that figure had risen to 29%, and Barrero expects it to keep moving higher in coming months.