Oil Prices Are Back Up After Brief Recession-Fueled Drop Tuesday 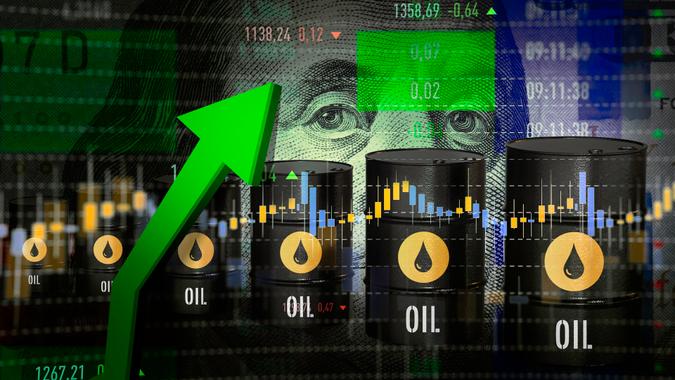 Learn: When Oil Prices Go Down, Why Don’t Gas Prices Follow?
Find Out: How Gas Prices Are Actually Determined

Most analysts expect oil prices to remain capped for the foreseeable future because of so many economic and market headwinds. In addition to the recession fears, a resurgent U.S. dollar has made oil expensive in other currencies, Reuters noted, which could curb demand.

Demand could also take a hit from renewed concerns about COVID-19 lockdowns across China, while a recent strike in Norway’s petroleum sector hurt the oil supply. That strike ended on Tuesday.

As recently as June 8, Brent crude was priced at $123.58 a barrel, while WTI was at $122.11. Since then, a series of events have heightened the likelihood of a recession and sent oil prices tumbling.

One of those events was the latest U.S. Consumer Price Index, which showed that consumer prices remain at a 40-year high despite attempts by the Federal Reserve to tame inflation through interest-rate hikes. The Fed responded by hiking interest rates another 75 basis points for the first time in nearly three decades – a move many observers expect to put the skids on economic growth.

Tuesday’s sharp decline in oil prices followed last week’s report from the Federal Reserve Bank of Atlanta’s GDPNow tracker, which indicates the U.S. might already be in a recession.

‘Live Richer’ Podcast: Canceled Flight? No Problem – Your Credit Card Might Pay You Back
Find: 4 Jobs To Reconsider Amid Looming Recession and What Makes Them So Risky

If you’re looking for a ray of light in this sea of darkness, there’s this: Gasoline prices have also fallen after hitting record highs in mid-June. The national average gas price was $4.779 a gallon as of June 6, according to AAA. That’s down from an all-time high of $5.016 on June 14.