Yellen: Congress Has Two Weeks to Fix Debt Ceiling or US Will Go Into a Recession 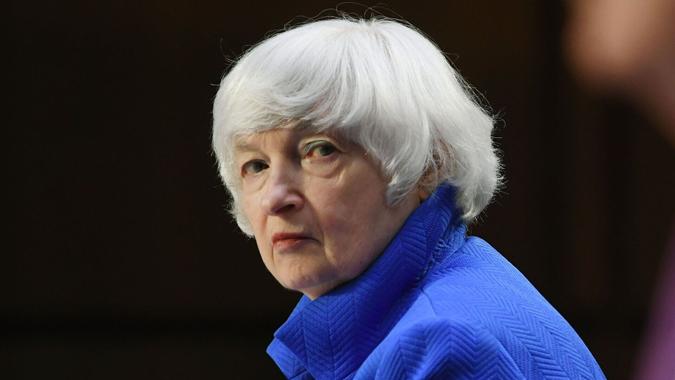 Treasury Secretary Janet Yellen issued another stark warning on Tuesday, saying the U.S. economy would go into a recession if Congress doesn’t do something about the debt ceiling within the next two weeks and help the government avoid defaulting on its debts.

For now, the U.S. Treasury Department is using “extraordinary measures” to pay bills, CNBC reported, and has been since hitting the last debt ceiling in late July. But that strategy will only work for so long, and Yellen has warned that the government will no longer be able to pay its bills on or about Oct. 18.

“I fully expect it would cause a recession as well,” she continued.

A recession would not only put an end to the economic momentum that began earlier this year as COVID-19 restrictions eased, but it would also send the economy in the opposite direction.

As previously reported by GOBankingRates, the National Bureau of Economic Research defines a recession as a “significant decline in economic activity,” normally visible in production, employment and other indicators. Although recessions are a normal part of the economic cycle, falling into one now — after nearly 20 months of economic uncertainty, business closures and lost jobs due to the pandemic — would have a particularly negative impact.

President Joe Biden on Monday urged Congress to raise the debt limit this week to avoid economic catastrophe, according to GOBankingRates, but so far Congressional Democrats and Republicans have not been able to reach a happy middle ground. Failing to do might set off any number of negative events, including a spike in interest rates, doubts about the U.S. government’s ability to pay its bills and the possibility that some federal services will have to be suspended or limited.

Still, some financial experts hold out hope that something will be done to avoid a debt-ceiling disaster.

“Our base case remains that the debt ceiling will be suspended again in time to prevent a default, and likely until after the 2022 midterm elections,” Lauren Goodwin, an economist and portfolio strategist at New York Life Investments, said in a statement to GOBankingRates. “Ultimately, we see the debt ceiling debacle as an event risk which should do little to impact the broader fundamental environment.”

See: What Is the Trillion-Dollar Coin and Can it Solve the Debt Ceiling Debate?
Find: Government Shutdown 2021: Will SNAP Benefits Be Impacted?

Scott Knapp, chief market strategist at CUNA Mutual Group, called the debt ceiling debate “a low-risk event” that financial markets have “mostly ignored” in the past.

“That will likely be true this time as well in spite of the somewhat apocalyptic rhetoric being used to describe the possible fallout,” he shared with GOBankingRates.