Comparing and Contrasting the FIRE Movement With ‘Lying Flat’ 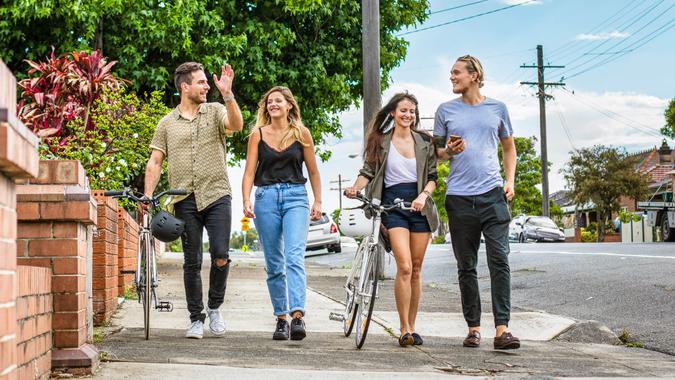 Anyone looking to break the chains of 9-to-5 drone life will find no shortage of inspiration online — tiny homes, side gigs, you name it. Millions of people across the world searching for meaning and work-life balance were inspired by two radical movements in particular — “Lying Flat” and “FIRE.” One took root in China, the other in the United States, but both were born from the same fears, anxieties and hopes.

Lying Flat: Do as Little as Possible

In the mid-2010s, a Chinese millennial named Luo Huazhong dropped out of his country’s version of the rat race, quit his factory job and rode his bike cross-country to Tibet. He survived by pulling $60 from his savings every month and filling in the gaps by working odd jobs. He branded his new lifestyle “Lying Flat” — doing the bare minimum required to get by. When he started blogging about it, a whole lot of bored and jaded young factory workers in China began dreaming of biking to far-away lands as the movement went viral.

FIRE: Spend as Little as Possible

On the other side of the planet around the same time, young workers in the United States were also growing tired of the societal and cultural expectations being placed on them in their own hemisphere. Disillusioned with the idea of working 40 or 50 hours a week until they were 65 only to live out their days in financial insecurity, they adopted the FIRE (financial independence retire early) theory, which was based on the 1992 bestselling book “Your Money or Your Life” by Joe Dominguez and Vicki Robin. The movement’s adherents save up to 70% of their income to accumulate 25 times their salary and retire decades early.

Both Are Extreme Rebellions Against Consumer Culture

Are You Doomed To Work Forever? What You Can Do If Your Social Security Isn’t Enough
Find Out: Best Places in Every State To Live on a Fixed Income

As both movements started gaining steam in the 2010s, young people in both countries were on their way to becoming the first generation to be worse off than their parents. Wages had been stagnant for decades but the cost of housing and everything else certainly had not. Both Chinese and American youth felt intense pressure to conform and perform, and both felt that they had been betrayed, abandoned and lied to by their leaders about their prospects for success if they worked hard and followed the rules.

Helpful Tips: Suze Orman, Warren Buffett and Other Money Experts Weigh In on How To Best Set Yourself Up for Retirement

They Both Come With a Catch

Both movements look good on paper, but they hit a few roadblocks when tested against reality.

The catch for FIRE is that to even consider it, you have to be rich — or at least you have to be doing much, much better than most. According to the Social Security Administration, the median salary in the U.S. in 2019 was a little more than $34,000. In order to sock away 70% for that early millionaire retirement, the median American worker would have to bank $23,800 annually, leaving you with $10,200 on the year. Anyone who has attempted to function as a human in modern America knows that $10,200 should definitely do the trick, provided that you don’t want to live anywhere or eat anything — and that’s the median wage earner, not someone who has it particularly rough.

For Lying Flat, the catch is that dropping out of society comes with consequences — and people who say that money doesn’t matter rarely come from poverty backgrounds. Doing odd jobs to maintain a subsistence lifestyle while biking to wherever the wind takes you sounds romantic — until you have an aging parent or a child to take care of. Lying Flat requires you to forgo not just stuff, according to Business Standard, but marriage, a home, a car and things like insurance and healthcare.

Be Aware: 30 Greatest Threats to Your Retirement

In Both Cases, Someone Is Going To Resent You

FIRE has been attacked from the beginning as a demographically exclusive movement that is of, for and by “tech bros.” As CNBC points out, that’s not always the case, but from the start, the movement’s prototype has been a young white male — single and unattached — earning a big salary in a big city that he was helping to gentrify at the expense of working-class people who couldn’t possibly attempt something like FIRE.

In China, abandoning your job to go find yourself puts a big bullseye on your back, according to Business Standard. The country’s ruling Communist Party does not take a c’est la vie attitude toward subversive behavior that threatens the country’s relentless march toward economic modernization.

Keep Reading: Jaw-Dropping Stats About the State of Retirement in America

If disaffected youth in China felt intense pressure to succeed academically, get married and work hard for the good of the country, they were not imagining it. That formula has lifted millions of Chinese out of poverty and made the country a global economic powerhouse. Going against the grain will earn you powerful enemies in China, and social ostracization is not the only consequence. The government has targeted the Lying Flat movement and its adherents, cracked down on social media posts about it and labeled it as a threat to national security.

In short, if you’re a Lying Flat practitioner biking toward Tibet and you see flashing lights behind you, pedal quickly.