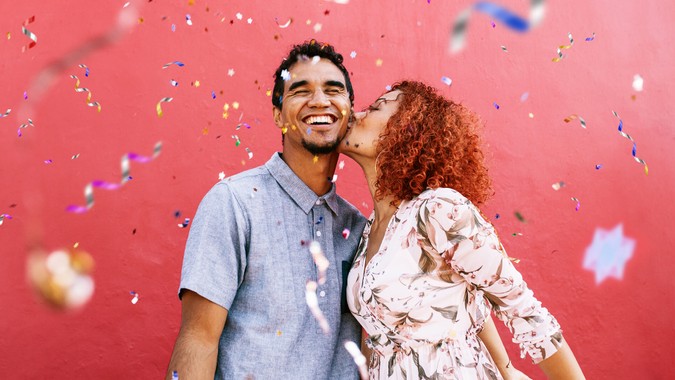 One of the many things that became “real” once my husband and I got married is our finances. For four years, our only discussion about money was in the notes of Venmo transactions. I had no idea how much he made, and he had no idea how much I made; we just knew we had enough money to split dinners.

That all changed when we moved in together and, shortly after, got married. Our short financial conversations had to become longer and include topics such as salaries, taxes and “how come you get so many Amazon packages?”

Here’s what my husband and I have learned after a few terrifying-but-worth-it conversations about combining our finances.

Find Out: 50 Ways To Live the Big Life on a Small Budget

Do: Show ’em What You’re Working With

My husband and I decided to do a “rip off the Band-Aid” approach and show each other everything, all at once. Sexy? Not quite. We each had tabs open on our computers of our bank accounts, credit card debt, student loan debt, credit scores and 401K’s and then showed them to each other. I was literally shaking when we did it because I had never shared this much information with anyone. However, being able to share that with someone who I love and trust was very freeing.

It’s always better to know what the two of you have, rather than being so anxious around it, neither one of you knows if you’re making the right decisions for your relationship. Remember: you’re on the same team. Having debt or a low credit score when you enter the relationship is not the end of the world — in fact, it’s extremely common. What matters is how the two of you navigate that going forward.

Learn More: 35 Useless Expenses You Need To Slash From Your Budget Now

We’ve all made a stupid purchase that we’ve regretted buying (see: tank top that says “Reno does it better”). Know that your partner has, too. So it’s paramount that you have compassion for each other when you begin combining finances. Remember: You’re working together, not looking for an enemy.

Our beliefs about money often come from our upbringings. While we don’t have control of these beliefs as children, when we’re adults we can start to question and change them — especially if they involve judging others harshly.

Saying your partner is “bad with money” or asking why there’s a new package at the door every day aren’t constructive ways of dealing with financial problems. Having an open conversation about money habits and goals, on the other hand, will create a greater sense of trust between you.

These conversations will also strengthen your financial future, especially if you’re married. The debt you accrue as a married couple becomes both of your debt, so ignoring money issues early on will only lead to less financial security in the long run.

My husband suggested we make a budget once we started living together and made The Spreadsheet which tracks joint expenses like rent, utilities and groceries. At the end of the month, the person who paid less drops the difference into a joint savings account or an emergency fund.

At first, I was hesitant, considering I wasn’t even that honest with myself about my spending. However, The Spreadsheet helped keep things equal between us and gave us a window into how much we were spending each month.

Once we got married and had our “show you my finances if you show me yours” moment, we took it a step further and wrote out how much we were making each month and how much we were individually spending. This gave us both an idea of how much we were spending collectively, so when sudden expenses come up — like car problems or a Very Extra Friend’s birthday dinner, you can confidently know which budget that has to come out of, or who might have some extra wiggle room to pay it.

If homemade spreadsheets aren’t your thing, there are plenty of other helpful budgeting programs: YNAB  focuses on building strong money habits to get you out of debt; Honeydue  focuses specifically on budgeting for couples; and Goodbudget  focuses more on putting money into specific categories and sticking to it.

Once you combine your finances, you might start to notice certain patterns. It might be tempting to start getting petty. Maybe you find yourself saying “I bought the extension cord, so you have to buy these limes.”

You don’t want to get in a habit where the budget becomes a game you’re trying to win against your partner. You’re still in this together and if you’re constantly looking for things to make your partner pay for, everyone loses.

Live Better: Tips To Keep Your Finances in Order Without Sacrificing What You Want

Do: Have a Shared Goal

Make budgeting more interesting with a goal you’re both excited about. My husband and I have never been out of the country together, so we’re saving money for a few weeks in Europe (once the pandemic is over).

Not all goals have to be Europe, though. We once saved up for a state-of-the-art water filter. Whatever it is, if you’re both sacrificing a little for something you both care about a lot, it makes conversations around money more streamlined, and sometimes, fun!

An effective goal-setting technique is the SMART system:

Once you’ve achieved a goal, celebrate! Saving up for something together and being able to get it means you’ve listened to each other and worked together to make something cool happen. If that doesn’t make you Couple of the Year, what does?

Don’t: Get a Joint Account Just Because You Think You Should

“Joint account” sounds mature, but it’s not a perfect match for every couple. Personally, my husband and I have a joint account that houses the money we got from our wedding and money we’re using to fund our shared goals. Everything else is maintained in a separate account. Even if we already know about how much is in our joint accounts, it still gives us a little bit of privacy, which especially comes in clutch around holidays when trying to keep purchases a secret.

If you’re ready to fully take the plunge and combine all finances into a joint account, however, by all means, go forward. It can definitely simplify bill-paying (no more spreadsheets!). Just make sure you’re continuing to be honest with each other, sticking to a budget, and creating new goals for your financial future — together!

Sam DiSalvo is an LA-based comedian, writer and actor who’s performed all over the country. Her written work has appeared in numerous digital publications. As a copywriter, she’s worked with a variety of major brands including GoldieBlox and Thrive Causemetics. Sam loves dogs and is currently perusing leisure suits to buy for her corgi mix, Barry