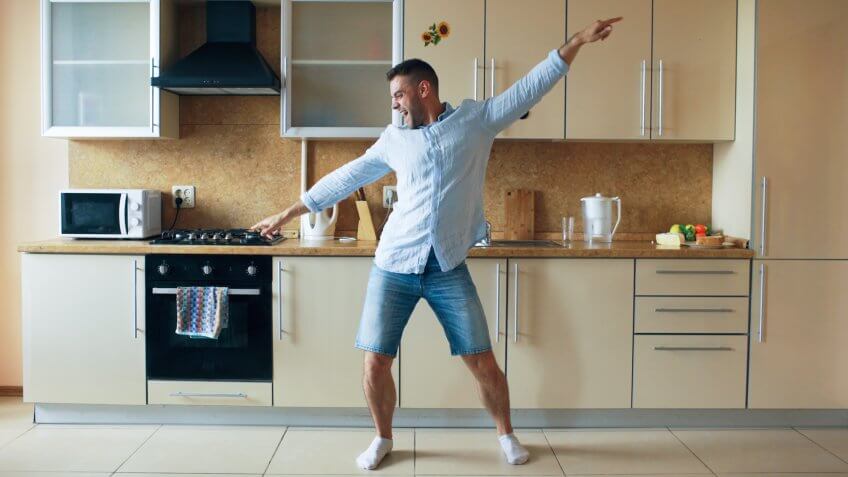 Although your odds of winning the lottery aren’t high, it’s still fun to dream about all the things you could buy with your winnings — especially if you win the $868 million Mega Millions jackpot on Friday.

However, many Americans say they wouldn’t splurge their winnings if they won. That’s according to a recent GOBankingRates survey that asked more than 500 adults what’s the first thing they would do if they won the lottery.

Click all the way through to see how Americans would spend their lottery winnings. 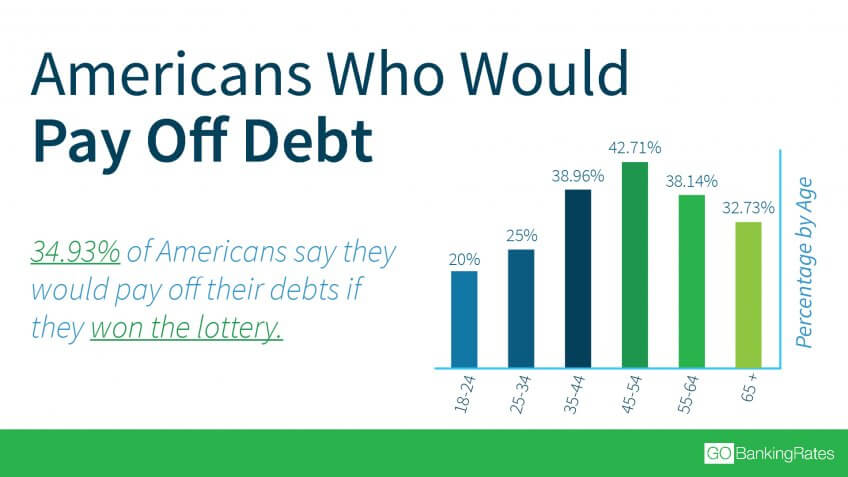 More Than One-Third Would Pay Off Debt With Their Winnings

It’s not surprising that Americans would want to pay off debt if they won the lottery, considering another GOBankingRates survey found that Americans with debt owe an average of $140,113. Adults ages 45 to 54 actually have the highest average amount of debt of any age group — which might explain why this age group had the highest percentage of respondents who said they’d use lottery winnings to pay off debt.

Young adults ages 18 to 24 were the least likely of any age group to say they’d pay off debt if they won the lottery — perhaps because another GOBankingRates survey found that this is one of the age groups with the least amount of credit card debt. 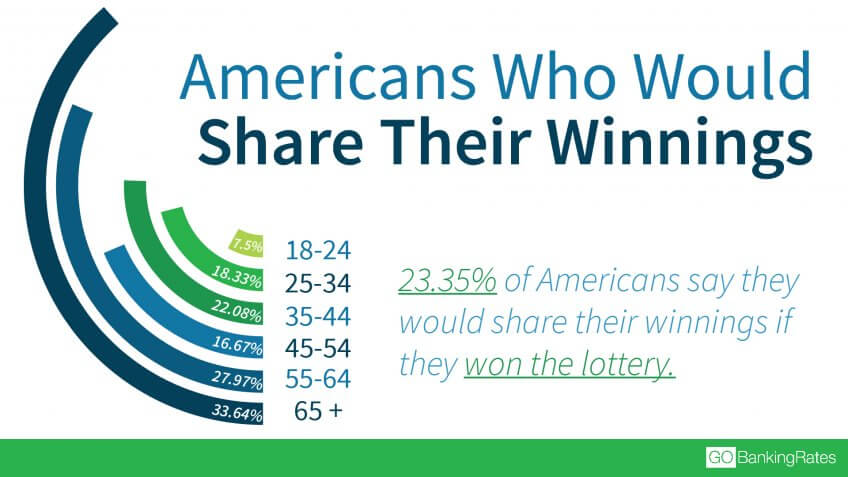 The second most popular thing Americans would do with lottery winnings is share the money with friends and family. About 23 percent of respondents chose this option.

Women and men are equally generous, the survey found. However, older Americans are more willing than younger generations to share winnings. In fact, adults age 65 and older were the most likely of any age group to want to share winnings with friends and family, and a higher percentage chose this option over paying off debt — 34 percent versus 33 percent.

Younger Americans ages 18 to 24 were the least likely to want to share their money, with just 7.5 percent saying they would split winnings with friends and family. 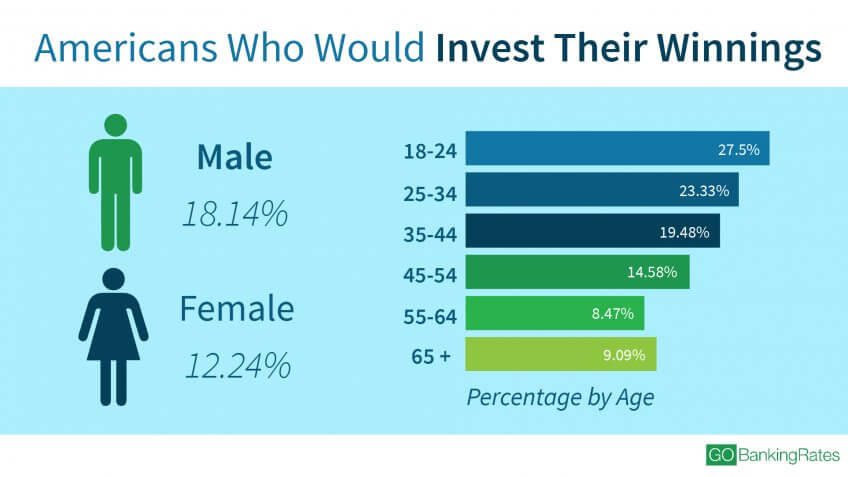 Even a small jackpot could grow into a big a fortune if you invested the money and let the power of compound interest do its magic. However, only about 15 percent of respondents said the first thing they would do if they won the lottery is invest the money.

Millennials, though, are more likely than older generations to want to invest their winnings. Nearly 28 percent of 18- to 24-year-olds and 23 percent of 25- to 34-year-olds chose this option. In fact, investing was the most popular thing to do with lottery winnings — along with putting the money in savings — for young millennials. 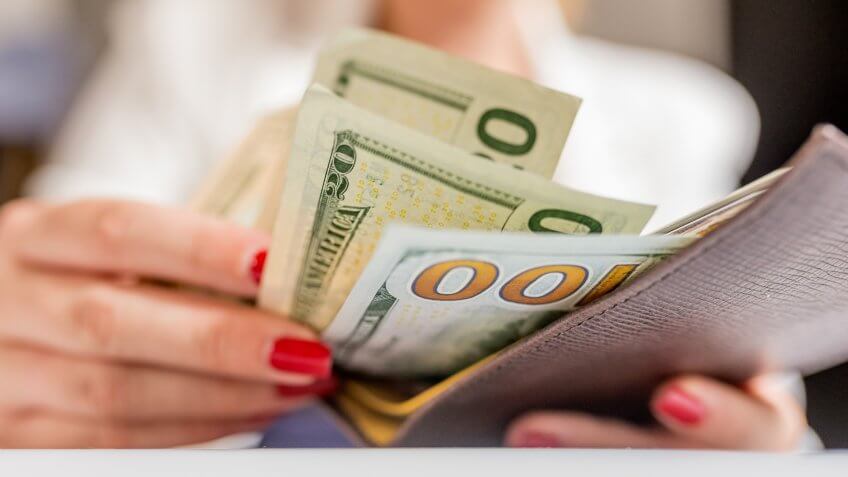 Saving winnings was one of the less popular answers among all respondents when asked what the first thing they would do if they won the lottery. But young adults were more likely to want to stash their money for the future. About 28 percent of young millennials ages 18 to 24 and 17 percent of older millennials ages 25 to 34 said they would save their lottery winnings.

Considering that another GOBankingRates survey found that 42 percent of Americans will retire broke because they have less than $10,000 saved, lottery winners would be smart to set aside some of their jackpot for the future rather than spend it all. 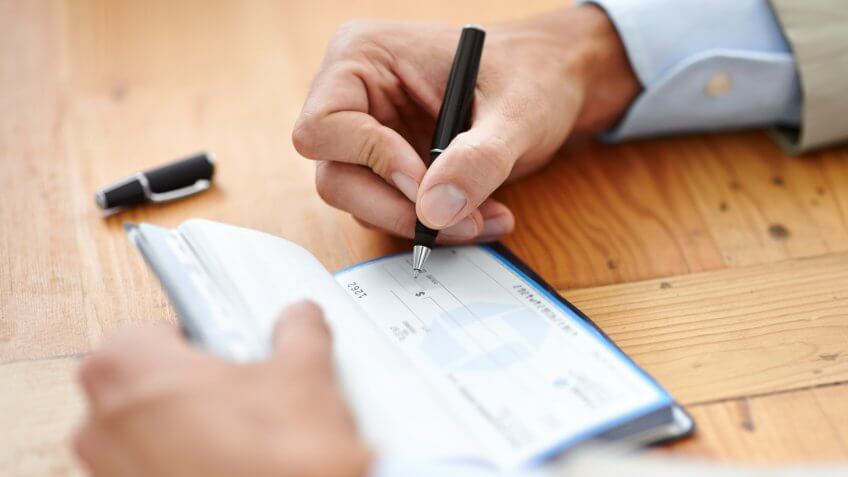 Most Americans Wouldn’t Be Charitable With Winnings

The survey found that only 7 percent of respondents said the first thing they would do if they won the lottery is donate their winnings to charity.

However, adults ages 18 to 24 and 55 to 64 were slightly more likely than other age groups to be charitable. According to the survey, 10 percent of young millennials and 9 percent of boomers said they would donate their winnings.

Spread the Wealth: Warren Buffett and 14 Other Celebs Who Donate Millions to Charity 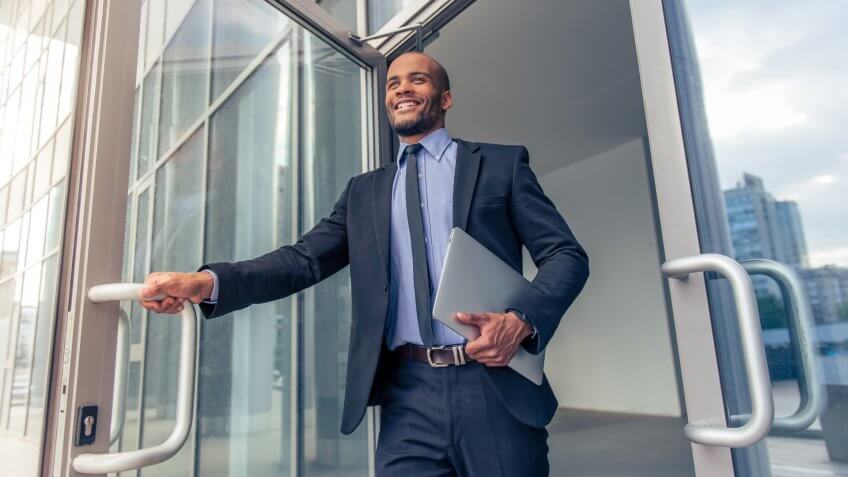 Few Americans Would Quit Working After Winning the Lottery

Sudden wealth wouldn’t turn most Americans into slackers. The survey found that only 5 percent of respondents would quit their jobs if they won the lottery.

However, Gen Xers ages 45 to 54 were more likely than other age groups to want to leave the 9-to-5, with 8 percent saying they’d quit their jobs if they won the lottery. 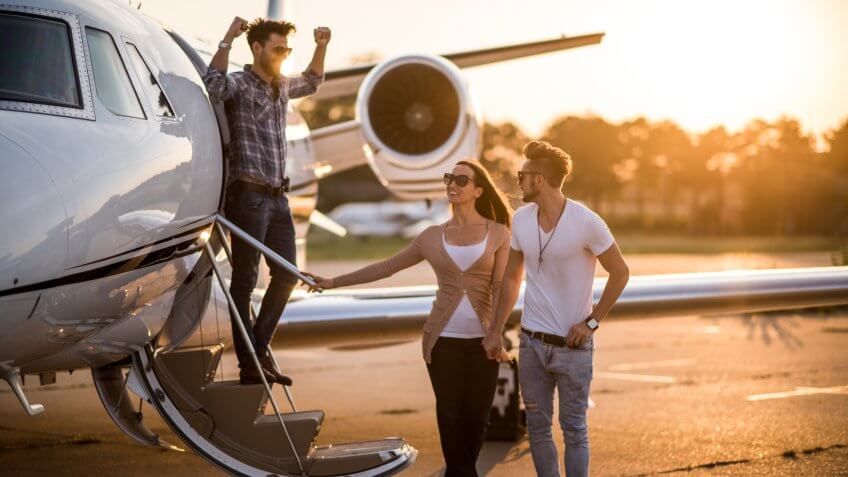 Most Americans Wouldn’t Go on a Spending Spree

It might be tempting to blow lottery winnings on a fleet of luxury cars, yachts, private jets or your own private island. But the survey found that most Americans wouldn’t run out and buy a lot of big-ticket items if they hit the jackpot. Only about 4 percent of respondents said they would splurge if they won the lottery.

Try This: What This Finance Expert Would Do If He Won the Lottery 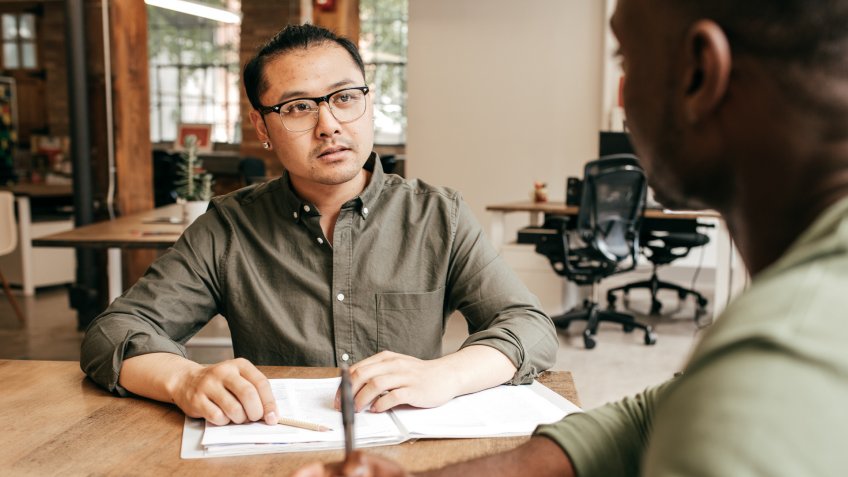 What to Do After Winning the Lottery

The survey shows that many Americans would make smart financial moves if they won the lottery, such as paying off debt or investing. However, an even smarter move would be to hire a financial advisor who can help you weigh whether to collect your winnings as a lump sum or a series of payments and create a plan for managing your wealth. Without guidance, you might end up blowing your millions and going broke — as many lottery winners have. 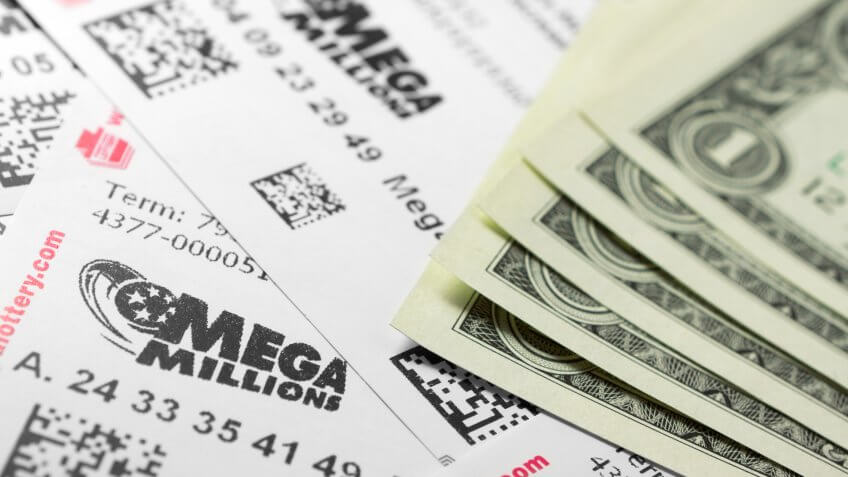 Most respondents didn’t even come close to correctly identifying the chances of buying a winning ticket. The odds of winning Mega Millions are roughly 1 in 259 million, and the odds of winning the Powerball jackpot are even smaller — 1 in 292 million. 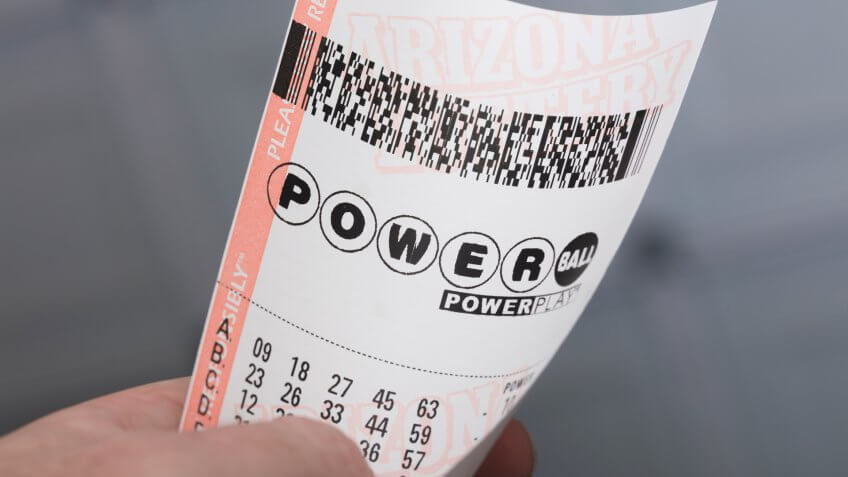 Although U.S. lottery sales are in the billions annually, most Americans don’t appear to be in the habit of buying lottery tickets on a regular basis, the survey found. When asked how many lottery tickets people bought each month, the most popular answer among respondents was one — nearly one-third chose this response.

The second most common number of lottery tickets purchased each month was zero, with 23 percent of respondents saying they don’t buy any. However, there are Americans who like to gamble on the lottery more often. The survey found that 6 percent buy 10 tickets a month. 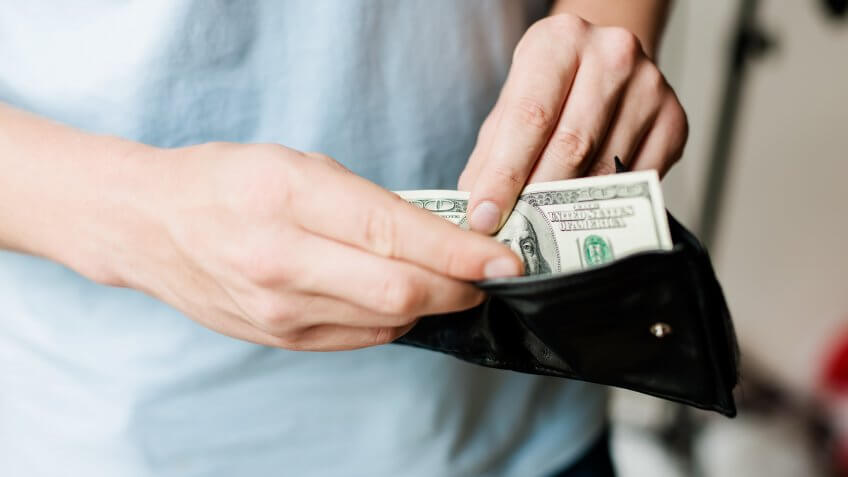 Better Ways to Spend Your Money Than Buying Lottery Tickets

Sure, it can be fun to buy lottery tickets in hopes of striking it rich. And it probably won’t blow your budget if you only do it occasionally. But if you’re buying tickets a couple times a week, you’re wasting money on the lottery — especially if you are living paycheck to paycheck, have debts to pay or have little to no savings.

Click through to find out how much you would have if you saved $1 a day for your entire life.

Methodology: GOBankingRates asked the following questions to 501 people: 1) In your best estimate, how many lottery tickets do you purchase every month? 2) Approximately, what is your annual income? 3) Your odds of winning the lottery are 1 in ____ million.  4) What is the first thing you would do if you won the lottery? Responses were collected through a Survata online survey from July 30, 2018, to July 31, 2018. 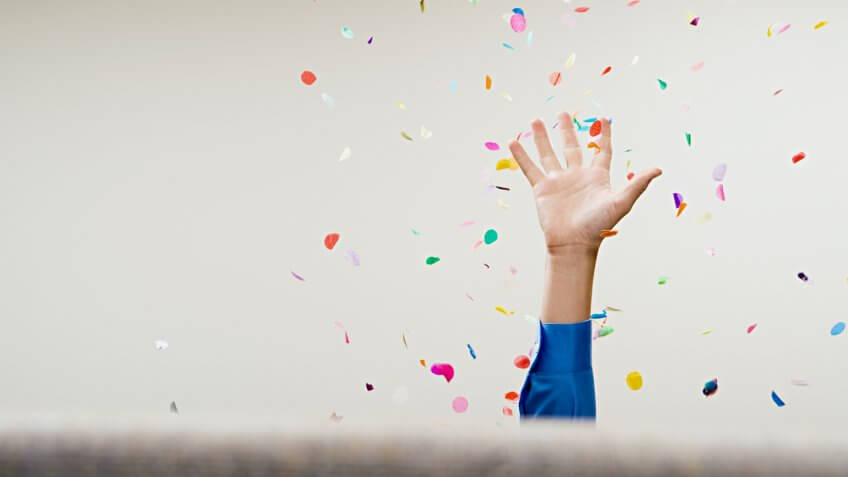 Here’s What 15 Lottery Winners Actually Did with Their Millions