How Much is Charles Munger Worth? 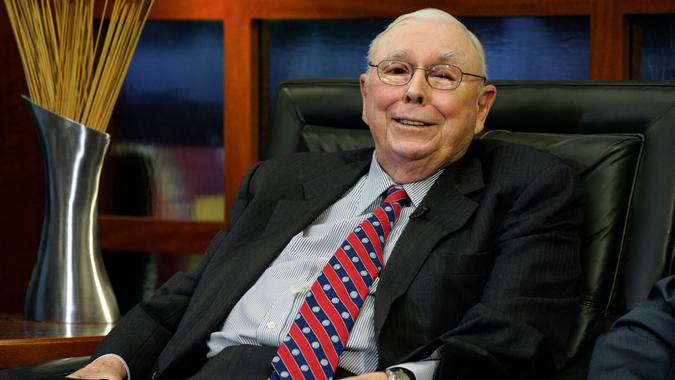 American businessman and investor Charles Munger, best-known as Warren Buffet’s business partner and vice-chairman of holding company Berkshire Hathaway, announced a partial retirement at age 98. While he will maintain a role with Berkshire Hathaway, he has stepped down from his position as chairman of Daily Journal Corp, a newspaper publisher and software provider. He has served the company in that position since 1977. GOBankingRates reported that he will remain a director and focus on the Daily Journal’s securities portfolio.

See: Elon Musk’s Net Worth Hits $281 Billion
Find: How Much is Jeff Bezos Worth?

With a net worth of $2.7 billion, according to Forbes, he surely could have afforded to retire decades earlier. Even so, he’s only enjoying a partial retirement as he will continue helping Buffett with major capital allocation decisions at Berkshire Hathaway, according to Reuters.

Born in 1924 in Omaha, Nebraska, Munger grew up nearby his eventual business partner Warren Buffett. They both worked at Buffett’s grandfather’s grocery store as teenagers, although not at the same time, learning discipline, customer service and business savvy. The boys earned roughly $2 for every 10 hours they worked.

After high school, he went to the University of Michigan. He droppped out in 1943 and enlisted in the Army Air Corps. The Army sent him to CalTech to learn meteorology, then stationed him in Alaska where he never saw combat.

How Did Munger Amass His Wealth?

In 1949, with his wife and children, Munger moved to California to work for the law firm Wright & Garrett, later founding his own firm. He continued practicing law until he was 41 when he decited to work in investing full time.

He also delved into real estate development and investment management, founding his own company in 1962 with a trader on the Pacific Coast Stock Exchange, Jack Wheeler. The highly successful investment firm yielded 19% average annual returns, according to CelebrityNetWorth.com.

When he returned to Omaha for his father’s funeral in 1959, he was reunited with childhood friend, Buffet. The two remained friends over the years, frequently discussing investment strategies. After closing his own firm in 1976, Munger joined Buffett’s investment firm Berkshire Hathaway as vice chairman in 1978, a position he has held ever since.

Munger on Why He Doesn’t Take a Salary

In 2017, Munger said in an interview with Yahoo!News, “I wish our example spread more because I think if you’re wealthy and own a share of a company and you get to decide what it does and whether it liquidates or whether it keeps going, that’s a nice position to be in and maybe you shouldn’t try to grab all the money in addition. And that’s my theory on executive compensation.”

He added that many entrepreneurs throughout history, including Andrew Carnegie and Cornelius Vanderbilt, also did not draw salaries. Instead, they lived on investments and dividends from the company.

His Real Estate and Philanthropy

The same is true for Munger, who first earned millions in real estate investing, including the development of an upscale, 22-acre oceanfront community in Montecito. Homes sell for roughly $10 million to $20 million, according to CelebrityNetWorth.com, with homeowners association (HOA) fees of $2,700.

Discover: MacKenzie Scott, Alice Walton and More of the Richest Women in America
Learn: Advice From Mark Cuban, Warren Buffett and Other Experts That Can Help You Survive a Crisis

Munger is also recognized as a philanthropist. Some of his favorite donation recipients include colleges and universities like University of Michigan, Stanford University, Pasadena’s Polytechnic School, and the University of California at Santa Barbara.