Jeff Bezos Has Stepped Down as Amazon CEO. How Much Is the Iconic Billionaire Worth? 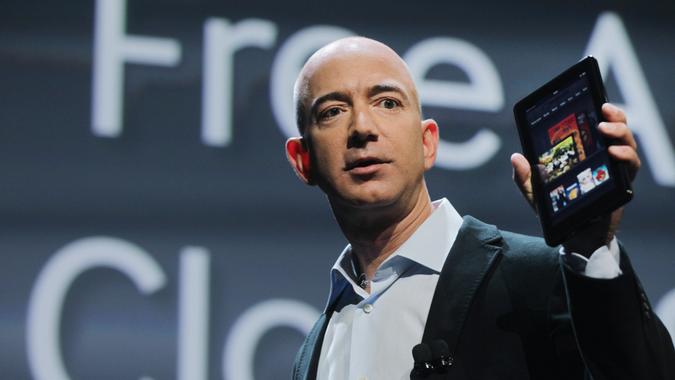 Jeff Bezos stepped down as CEO of Amazon — the company he founded that made him a global figure — on July 5, 2021. He chose that day for sentimental reasons. It was, after all, the 27th anniversary of the day the company was incorporated in 1994. About a year later, on July 16, 1995, Seattle-based Amazon opened its virtual doors and started selling books online. Bezos himself helped to package up the orders and deliver the boxes to the post office for shipping.

Find Out: These 47 Billionaires Got Richer During The Pandemic
Learn More: The World’s 10 Richest Millennials

Since those early days, Bezos’ wealth has multiplied to stratospheric numbers. On July 5, when he transitioned to executive chairman of Amazon, Forbes listed Bezos as the world’s richest person with a net worth of $201.8 billion — more than $30 billion above the No. 2 person on the list, Tesla and SpaceX CEL Elon Musk.

In early January 2021, Bezos was overtaken by Musk as the wealthiest person on the list — briefly. In 2020, Bezos claimed that slot as the world’s wealthiest person for the third year in a row, despite giving $36 billion worth of his Amazon stock to his ex-wife, MacKenzie Scott, as part of their divorce settlement in 2019.

Bezos has amassed astounding wealth — and significant controversy over how much he pays workers and donates to charity — while using Amazon to disrupt virtually every consumer industry.

Keep reading to see how Bezos’ ideas changed the way you shop, and how he made an absolute fortune in the process.

As Amazon stock continued to climb, achieving a market valuation of $1.7 trillion, so did Bezos’ net worth. On July 6, 2016, one share of Amazon was valued at $745.81. Five years later, it was $3,510.98. Bezos has other investments bolstering his position as the world’s wealthiest person, including ownership of The Washington Post and Blue Origin, which is developing rockets for commercial use.

See: How Jeff Bezos Built Amazon into What It Is Today

Jeff Bezos has not always been viewed as the most generous billionaire — especially when compared to Bill Gates and Warren Buffett — as he has donated less than others in similar positions to charitable organizations or causes. Bezos also has refrained from participating in The Giving Pledge. Ex-wife MacKenzie Scott committed to the initiative, in which the world’s wealthiest people pledge to donate half their wealth either throughout their lifetime or after their death. Gates, Buffett and about 200 others have signed The Giving Pledge.

However, in 2020, Jeff Bezos made the single largest charitable donation of the year, giving $10 billion to launch the Bezos Earth Fund, an organization that supports nonprofits working to fight climate change. Bezos also made a $100 million donation to the Feeding America COVID-19 Response Fund.

Check Out: Global Catastrophes Jeff Bezos Could Fix and Still Be the Richest Man in the World

Jeff Bezos’ Start as an Entrepreneur

After growing from its start as a book seller, Amazon offers a slew of products and services to customers around the globe, which helped it become the fastest company ever to reach $100 billion in annual sales — a feat achieved in 2015. Today, the company holds a valuation of approximately $1.7 trillion and achieved record fourth-quarter revenue exceeding $125 billion in 2020.

Amazon issued an IPO in May 1997, but the man behind the online retail giant still retains a 10.3% stake in the company. In 2020, he cashed out $10 billion in Amazon stock and another $4.9 billion in May 2021, perhaps to help fund other ventures that he says will become his focus.

Whoa: If You Would Have Bought Only 100 Shares of These 10 Stocks, You Would Be Incredibly Rich
Everyone Makes Mistakes: Jeff Bezos’ Most Outrageous Business Failures

In 2013, Bezos became one of the largest players in the news industry after he purchased The Washington Post for $250 million.

In March 2017, Bezos purchased Dubai-based online retailer Souq.com for $580 million, CNBC reported. That gave him an opportunity to expand Amazon to the Middle East.

In 2017, Bezos also purchased the Whole Foods grocery store for $13.7 billion, which paved the way for Amazon to revitalize its food delivery service, Amazon Fresh.

In 2016, Bezos spent $23 million to purchase the 27,000-square-foot former Textile Museum in Kalorama, a swanky Washington, D.C., neighborhood. The property consists of two historic mansions that are on the National Register of Historic Places. Despite the major investment, the primary Bezos residence remains in Washington state.

Located in the Seattle suburb of Medina, the main Bezos home is a 29,000-square-foot compound not far from Amazon’s headquarters. Originally a 13,000-square-foot home, Bezos’ 5.35-acre waterfront property underwent a $28 million renovation to transform it into a sprawling oasis, according to Forbes.

According to real estate website Inman, Bezos also owns a 30,000-acre ranch outside of West Horn, Texas, and a penthouse on Fifth Avenue in New York City.

Everything Changed: How Amazon Changed Our Shopping Habits — For Better and Worse
Need Help Choosing? Walmart+ vs. Amazon Prime: Which Is Better?

Immediately after becoming rich, Bezos didn’t head straight to the car dealership. Despite owning roughly $10 billion in Amazon stock in 1999, Bezos was reported by CNBC to still be driving a Honda Accord. That said, Bezos isn’t always a rich person that lives like an average Joe.

Along with his impressive real estate portfolio, Bezos owns private jets — including two Gulfstream aircraft — for his personal travel needs. His limited liability company, Poplar Glen, paid $5.5 million for a hangar at Seattle’s Boeing Field to store his jets in 2015.