Consumer debt is at an all-time high of $12.8 trillion. One of the big drivers of the increase is rising credit card debt — which is now $784 billion, according to the Federal Reserve Bank of New York.

Clearly, Americans are relying more on credit. But are other areas of their finances suffering as a result? To find out, GOBankingRates surveyed more than 4,000 adults across the U.S. We asked, “What do you have more of: Credit card debt or money in your savings account?”

The results were surprising. Read on to find out whether Americans have more credit card debt or money in a savings account.

Majority of Americans Have More in Savings 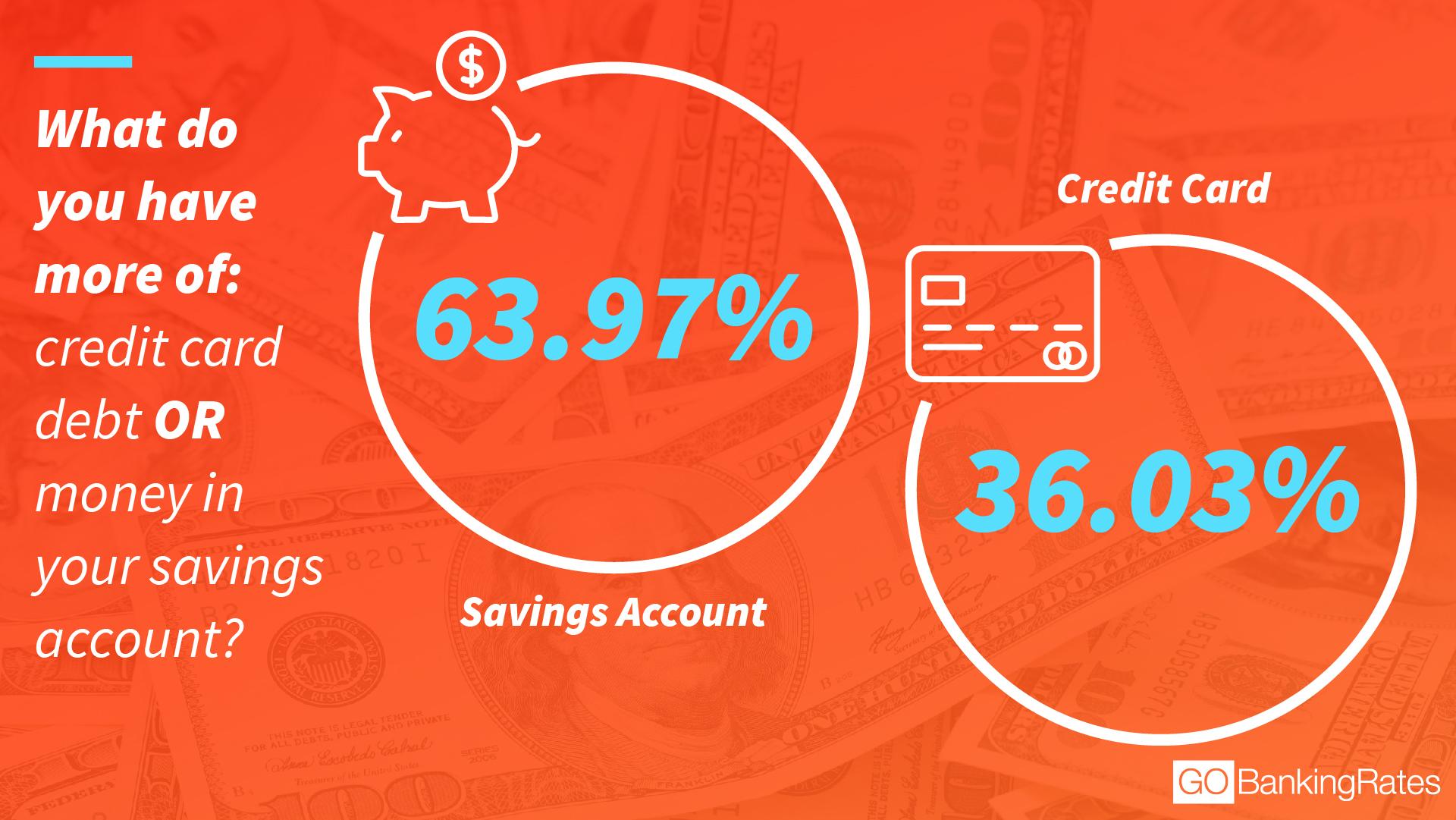 “I would be surprised that more Americans are indicating that their savings exceed their revolving charge balances,” said Bruce McClary, vice president of communications at the National Foundation for Credit Counseling. “We have found, through our own surveys and internal data, that a growing portion of the population is carrying larger credit card balances while not making progress with their savings.”

The discrepancy might be the result of respondents in this survey considering their overall savings rather than just the amount they have in a savings account.

“When I ask people how much they have in savings, they usually include their retirement accounts,” said Neal Frankle, a certified financial planner and founder of credit repair website Credit Pilgrim. “So that might skew the results.”

The survey’s results also could be influenced by current economic conditions, Frankle said. “Right now, jobs are plentiful, the market is doing well and inflation is low,” he said.

Saving Money vs. Paying Off Debt: Find Out Which Is More Important 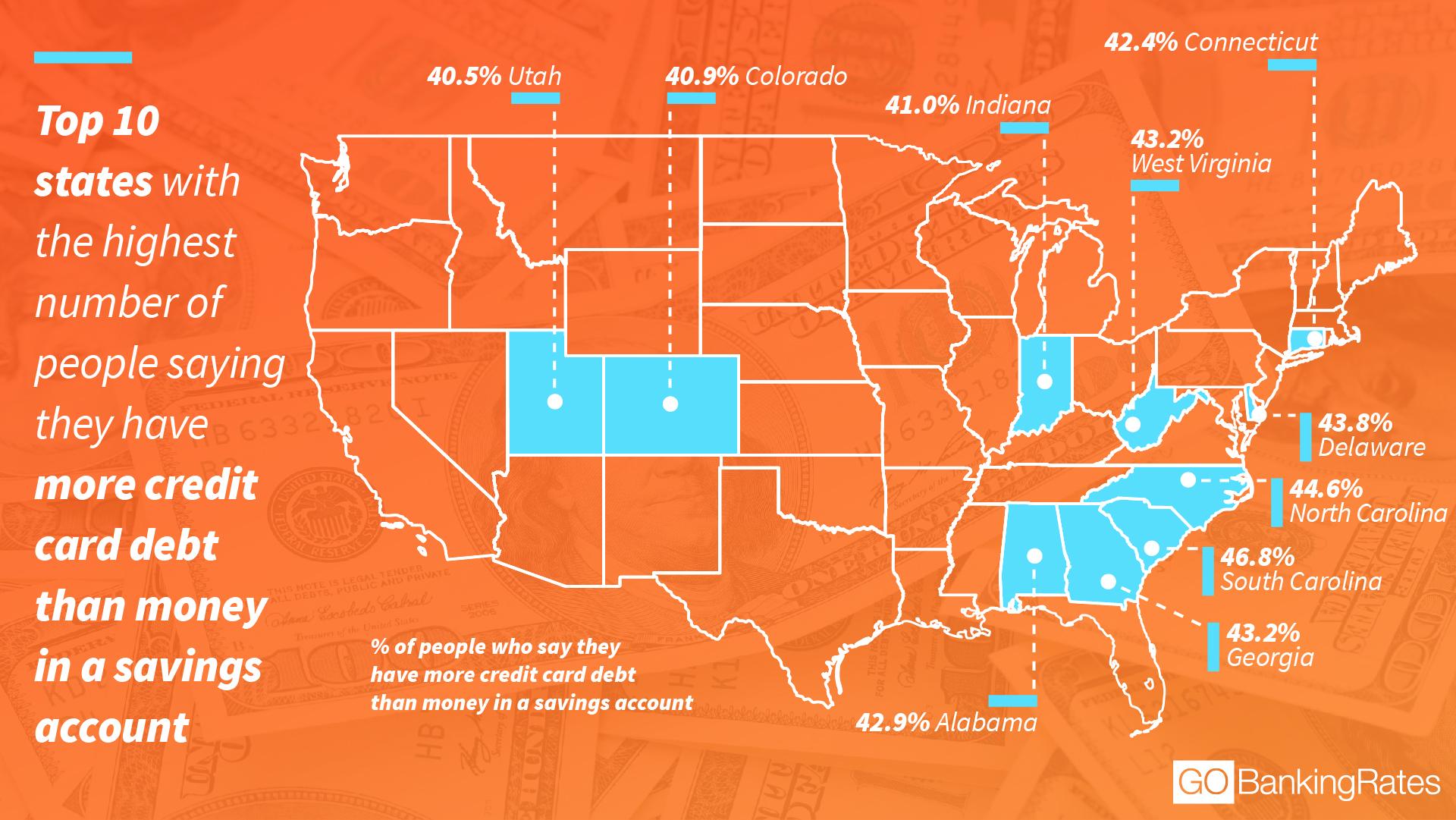 Higher debt balances and smaller savings account balances could be tied to lower income. “Income levels in some areas of the South, particularly the Southeast, have historically been at or below national averages,” McClary said. “Families in parts of this region are stretching their dollar to meet basic needs, often falling short of their savings goals. At the same time, these households may have difficulty quickly paying off their credit card debt.” 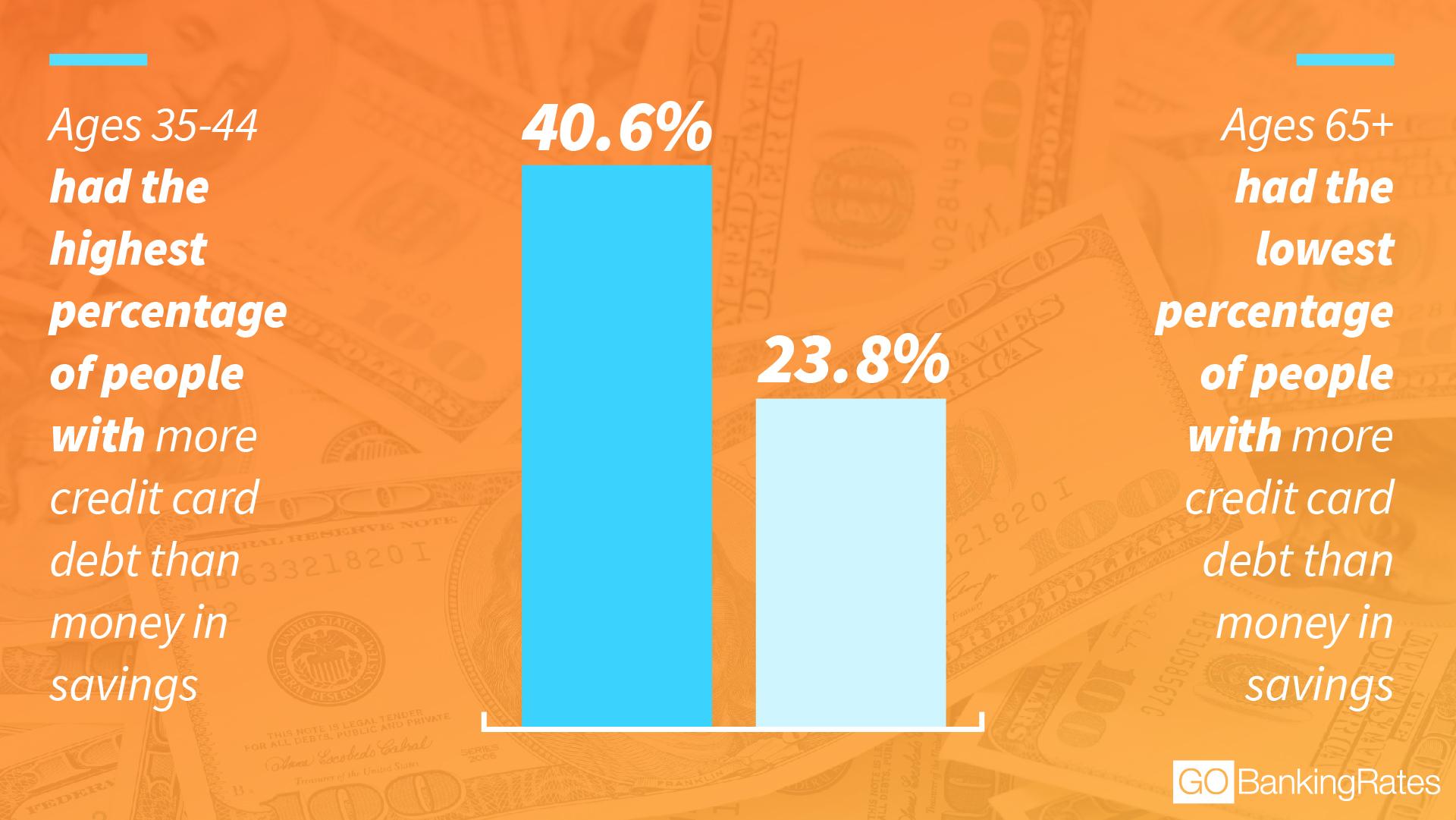 The survey found Generation X — adults ages 35 to 44 — had the highest percentage of respondents with more credit card debt than money in a savings account: nearly 41 percent. “These are the peak spending years,” Frankle said. People in this age group are more likely to be buying homes and furnishing them, shouldering the costs of raising kids and even taking vacations with kids in tow.

“Many people in this age cohort feel they have no choice but to lean on the plastic,” Frankle said. “This is unfortunate because most of their spending is discretionary.”

However, older Gen Xers and millennials weren’t far behind.

A separate GOBankingRates survey found that older adults tend to have more in a savings account than younger generations, which might explain why 76 percent of respondents 65 and older in this survey said they have more money in savings than credit card debt.

Don’t Miss: The Best Ways to Pay Off Every Kind of Debt 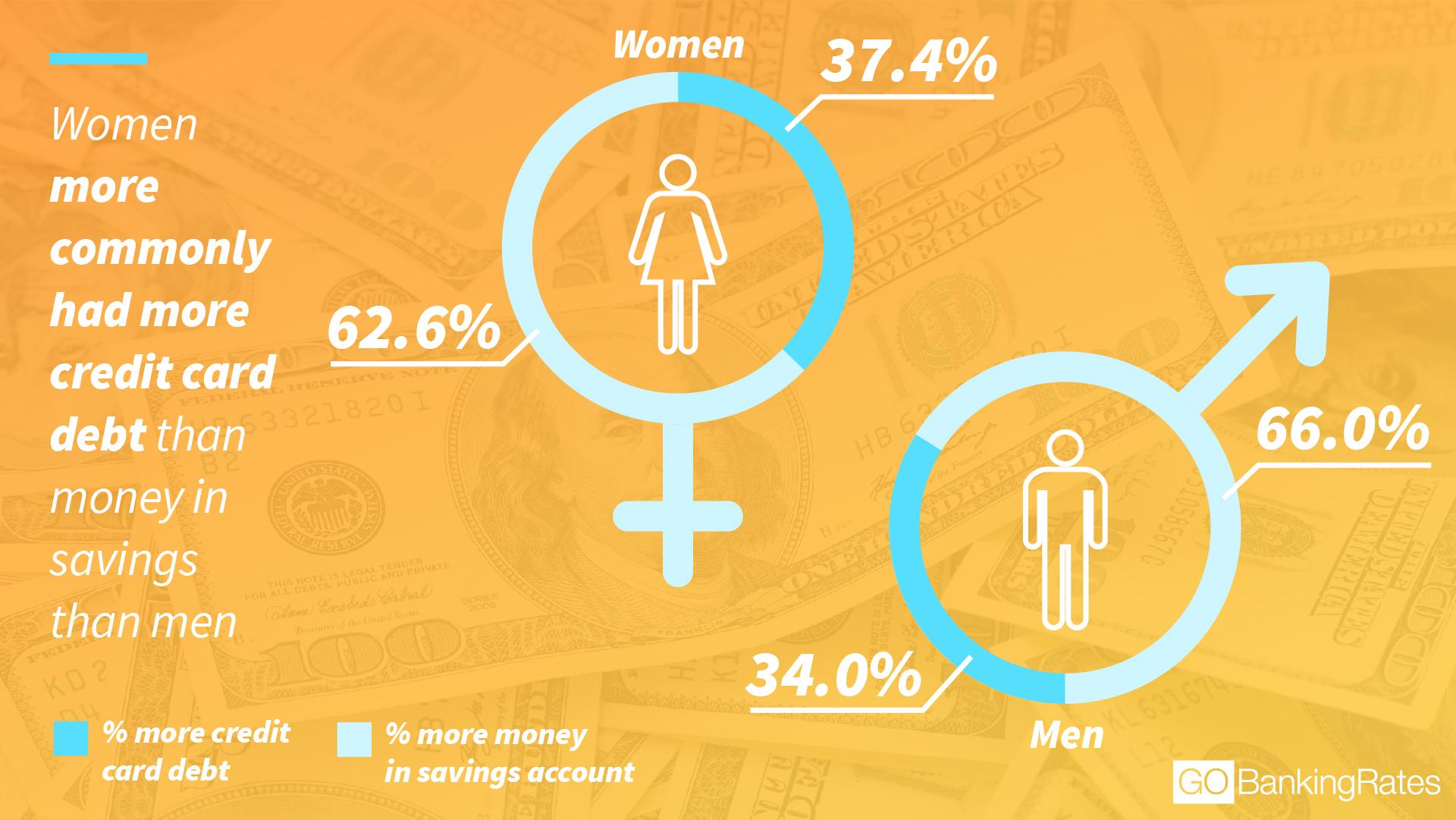 The survey found that a higher percentage of women than men said they have more credit card debt than money in savings — 37 percent versus 34 percent. Other GOBankingRates surveys have found that women with debt owe a higher median amount than men and that women lag behind men when it comes to the amount they have in a savings account. Women are especially vulnerable if another recession hits.

One of the reasons a greater percentage of women than men report having more credit card debt could be that women are more honest, Frankle said. Men might be less likely to admit how much debt they have or overestimate how much they have in savings.

The difference also could be a result of the gender gap in pay between women and men, Frankle said. Women working full-time typically earn 80 percent of what men are paid, according to the American Association of University Women. Frankle also said that many of the divorced women he hears from on his Credit Pilgrim blog claim that they have a disproportionate share of the financial responsibilities of raising children.

“In addition, some have not had the opportunity to advance in their profession if they take on the role of homemaker,” Frankle said. “All these forces come together, and it’s no wonder why women end up with more credit card debt than men.”

McClary recommended creating an emergency fund with an amount equal to six months worth of your net income. Hopefully, that much cash in savings would help you get through a job loss or other large emergency.

Frankle recommended another approach. Figure out how much money you would need to cover any upcoming one-time costs, such as a home or car repair, the purchase of a big-ticket item or a medical procedure. Add that amount to the most you’ve ever had to spend on an unexpected emergency to determine how much you need to have in a savings account now. “This is a conservative yet realistic way to gauge what your emergency account should be,” he said.

How Much Credit Card Debt Is OK

If you have more credit card debt than money in a savings account, you might need to take action. “Acceptable credit card debt is the amount you can pay off each month,” Frankle said. “If you can’t do that, take it as a sign that things have to change.”

A high level of debt could make it difficult to build savings. Then when an emergency strikes, you’ll be forced to rely on credit — which will only increase your debt.

“In order to get out of debt, rely on conventional wisdom: cut spending, reduce credit card interest by refinancing and increase your income by taking on side work,” Frankle said. “This is not complicated, but it is hard work. That’s why many people don’t do it and get stuck in the debt cycle.”

Methodology: GOBankingRates posed the following question to 5,026 respondents: “What do you have more of: credit card debt or money in your savings account?” Respondents could select one of the following answer options: 1) Money in savings account 2) Credit card debt. Responses were collected through a Google Consumer Survey conducted Sept. 21-23, 2017, and responses are representative of the U.S. online population. 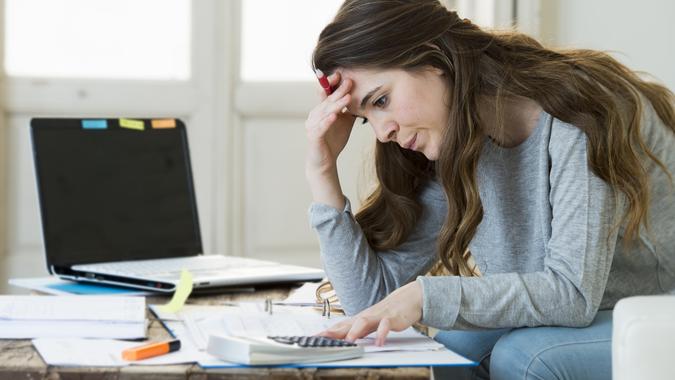 One woman shares how being in debt hurt her finances and self-esteem.