Generation Debt: It’s Not Who You Think 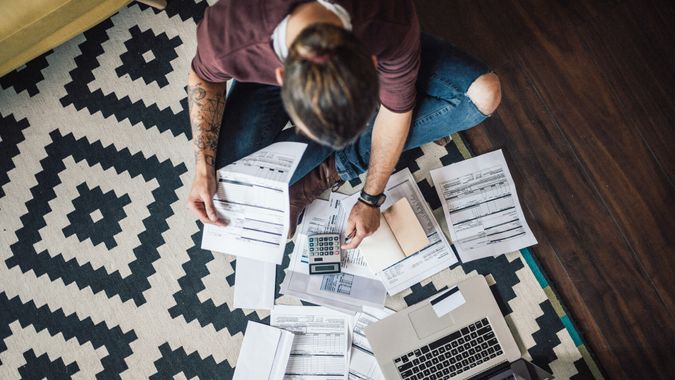 An overwhelming majority of Americans report having some kind of debt, and the number has been increasing in the past year, according to a new survey. While that phenomenon is reported across all age ranges, there are some notable generational differences.

Find Out: How Much Debt Americans Have at Every Age 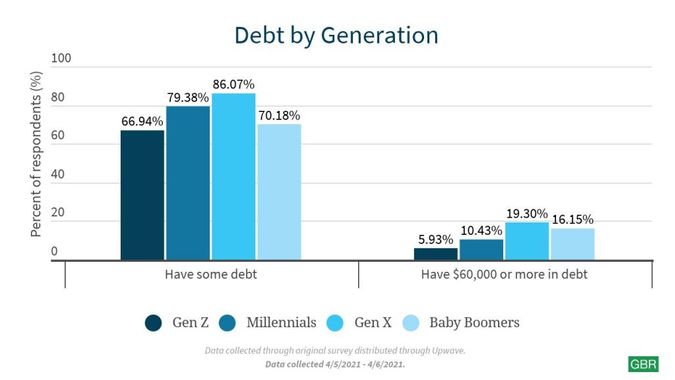 “In 2021, the oldest Gen Xer is 56 while the youngest will be 41. By these ages, one could typically expect that a member of Gen X has already purchased a home, had kids (potentially already in college) and lived through the 2008 financial crisis as well as COVID-19 pandemic in the ‘prime’ of adulthood,” Murray says.

Never Too Late: 10 Things Gen Xers Can Do To Improve Their Finances

Murray adds that if you compare the Millennials (who would be 25 to 41 in 2021) and Gen Z (who would be 24 and younger in 2021), “It becomes clear that Gen Z is too young as a whole right now to accrue massive amounts of debt outside of student loans and a good chunk of Millennials came into adulthood during the 2008 financial crisis which made it near impossible for them to own a home/accrue mortgage debt. So by just being born when they were, Gen Xers were unfortunately exposed to being the first generation with a student loan crisis and having to live through the 2008 financial and housing crisis in the peak of adulthood.”

Ryan Rollins, owner of TeachMePersonalFinance.com, adds other reasons as to why GenXer’s carry more debt than other generations.

“Prior to the 2008 housing crisis, owning real estate was always viewed as a sure-bet as investments go. In addition, we had seen a dramatic decrease in interest rates from the 1980s. This led many people of my generation [Gen X] to borrow more than what might be prudent today. When the market crashed, people went underwater on their loans,” Rollins tells GOBankingRates.

Rollins adds that the past few decades have also seen a material shift in the cost of higher education and value of degree. “Tuition rates have increased while the value of a degree has decreased, becoming more table-stakes than a differentiator,” he says. “Add in the 2008-2010 recession with it’s slow job-growth, GenXers were left with higher debt and less employment opportunities to offset it.”

In terms of the types of debt, Gen Z, Millennials, and Gen X all have around 65% of respondents saying they took on some kind of student debt compared to just 33.54% of Baby Boomers – people born between 1946 and 1964.

However, the survey here also once again notes the generational differences in the terms of the amount of student debt taken: 43.67% of Gen X took on $10,000 or more in student debt; compared to 33.05% of Gen Z and 38.43% of Millennials.

Watch Out: What Not To Do While Trying To Get Out of Debt

Alcantara says there are three main reasons for the current state of Gen X debt: they have a full financial plate with being inbetweeners often raising children and helping to care for aging parents, both costly. In addition, along with present and future costs of child-care, she adds that a recent study by GoHealth,  found that 69% of Gen Xers help with their parents medical bill, and 73% feel they may have to delay retirement due to supporting aging parents.

Finally, “They are the product of 90s and early 2000s culture focused on consumerism on credit including expensive credit card debt and mortgages. In the 90s, former luxuries like color TVs and appliances became household staples, changing the lifestyle of the average American. Meanwhile, the booming financial services industry had maximized their reach into affluent households and the increased competition of consumer credit suppliers like payday lenders led banks to reduce their credit requirements and increase interest rates. Thus, Gen Xers were imprinted with a credit mindset,” she adds.