This video covers the importance of breaking out of the shackles of debt.

A quick plan to break your debt shackles is:

Darren Hardy: Well, good morning and welcome back. So, to continue our 10-day series, let’s get straight to number six. Number six is this: Break the shackles. If you are like the two-thirds of college graduates, you’re starting off in debt. The average college graduate debt is about $30,000.

Let me give it to you straight: If you’re in debt, you’re enslaved. Andrew Carnegie said it before I did. He said, simply, “Those in debt are slaves.” It’s even written in the Bible — Proverbs, 22:7, I think. “The borrower is the slave to the lender.”

Read: Crucial Questions to Ask When You’re Deep in Debt

While you may live in a free society, if you have debt, you’re not free. You are owned by someone else. In the Oxford Dictionary, in fact, the term “slave” is defined as “a person who is the legal property of another and is forced to obey them.” Those are actually a fact of the terms of your debt. Go ahead and read the fine print. You cannot and will not be free until you are debt-free. You have to attack this with a vengeance, and immediately — before it spreads in your life like a disease.

According to the Federal Reserve, the average American household is at least $75,000 in debt, yet 43 percent of all American families spend more than they earn each year. Overall, consumer debt in America has increased by a whopping 1,700 percent since I was born in 1971.

And then, every major milestone in our lives typically involves creating more debt. Total home mortgage debt in the United States is now about five times larger than it was just 20 years ago. And mortgage debt, as a percentage of GDP, has more than tripled since 1955. 70% of all car purchases in the United States now involve an auto loan. Oh, and then you get married, combine your debt, and spend the on average of $26,989 on the one-day Cinderella affair, feeding distant family members you haven’t seen in 20 years or probably won’t see since.

And God forbid you get sick. According to the American Journal of Medicine, medical bills are a major factor in more than 60 percent of personal bankruptcies in the United States.

The worst evil of all though, is credit card debt. Let’s say you quote-unquote “only” have $5,000 dollars in credit card debt. It’s easy to rack up $5,000 in debt: one ski outing, one week to Hawaii, or one Disney trip could do it. You think, “Ah, that’s not so bad, really,” but over 10 years at 22 percent annual interest rate compounded monthly, that debt grows to $44,235, or about nine times what it appears to have cost you on face value. And by that time, you can’t even remember if you went on the Dumbo ride or not.

Read: How to Trick Yourself Into Paying Off Your Credit Card Debt

Now the average American household carries an average balance of about $15,000 or $16,000 in credit card debt at an average interest rate of about 12.83 percent. So, let’s say you’re 25 years of age now. By age 65, you will have paid — get this — $2,629,618 to your enslavers. Sadly, approximately 46 percent of all Americans carry credit card balance from one month to the next. Today, the total amount of consumer credit in the United States is 15 times larger than it was 40 years ago.

So, are you starting to understand why approximately half of all Americans die broke? They spend their whole life making and accumulating money, and they die broke. But they did it to themselves.

But not you, not now. Now you are smarter than that. Your first priority is to remove the shackles from your ankles and get out of debt prison. Every available dollar has to go to this objective. I was taught early on, if you can’t afford it, you can’t have it. Period. No credit card can pay for what you can’t afford. You see, I use a credit card, but primarily for tracking and mileage reward incentives. But it’s completely paid for each cycle. I never — let me say it again — never revolve credit. That’s a fool’s game. With my personal finances, beyond real estate, I don’t believe in carrying any debt — as in zero — whatsoever. I never have.

If you are not there yet, get there quickly. Make that your first and most urgent priority in life. Eliminate every expense beyond your absolute, basic survival needs until you have zero debt. It’s amazing to me when I know people who have thousands upon thousands of dollars of credit card debt, and I see them going out to dinner, or going out on a vacation, or they go shopping for new clothes. Really?

Now, I can hear you saying, “Really? Uh, if I have credit card debt, then I can’t treat myself or have any fun?” Yes, that’s exactly what I’m saying. If it costs money that you don’t have, you can’t afford that fun. You can have all the fun that you want — if it’s free. What I’m saying is, you cannot afford treats or fun that cost money. Look, you already danced. No more dancin’ until the fiddler has been fully paid up.

Read: What They Should Have Taught You About Money in School

This video originally appeared on DarrenDaily.

Disclaimer: The statements and opinions expressed in this article are those of the author. The author is responsible for the statements, claims and facts provided in the content.

Darren is  a highly sought-after keynote speaker, media contributor, New York Times-bestselling author of three books and the success mentor to many of today’s top CEOs and high-performing entrepreneurs all over the world. 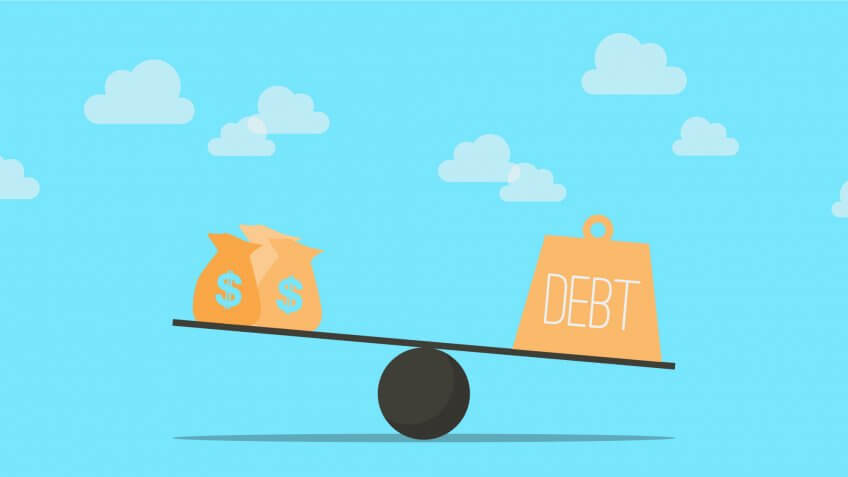 Here’s How Much Debt Americans Really Have

New survey on national debt finds out which types of debt burden Americans the most.

GOBankingRates > Net Worth > Debt > 3 Steps to Free Yourself From Debt