Parents are expected to support their kids — and that responsibility comes with a big price tag. These days, it can cost more than $250,000 to raise a child through age 17. The financial support often doesn’t stop there, though. Parents shell out big bucks to send their kids to college, and some continue to help their kids out financially into adulthood.

What happens when the tables are turned? Do parents expect their kids to support them in retirement if necessary? And are kids willing to pitch in and help?

To find out, GOBankingRates surveyed parents and children across the U.S. The survey found that there’s a big difference between the level of financial support parents expect to receive and the help children plan to provide. Here’s what happens when it’s time for the kids to contribute.

Most Parents Don’t Expect Financial Support From Their Kids

The GOBankingRates survey found that 92 percent of parents polled said they don’t expect any financial support from their children in retirement. “Most people in the United States are independent, and they don’t want to rely on anybody,” said Kathleen Hastings, a certified financial planner with FBB Capital Partners in the Washington, D.C., area.

That’s likely why such a large percentage of survey respondents said they don’t expect support from their kids. Parents’ answers might be different if asked whether they would allow their children to help them out financially if necessary, Hastings said.

Another reason such a large percentage of parents answered that they don’t expect their children to support them in retirement might be because they don’t think they’ll need help. “Most people think that it’s not going to happen to them,” Hastings said.

Are You Prepared? Saving for Retirement Is Not a Priority for 40% of Americans 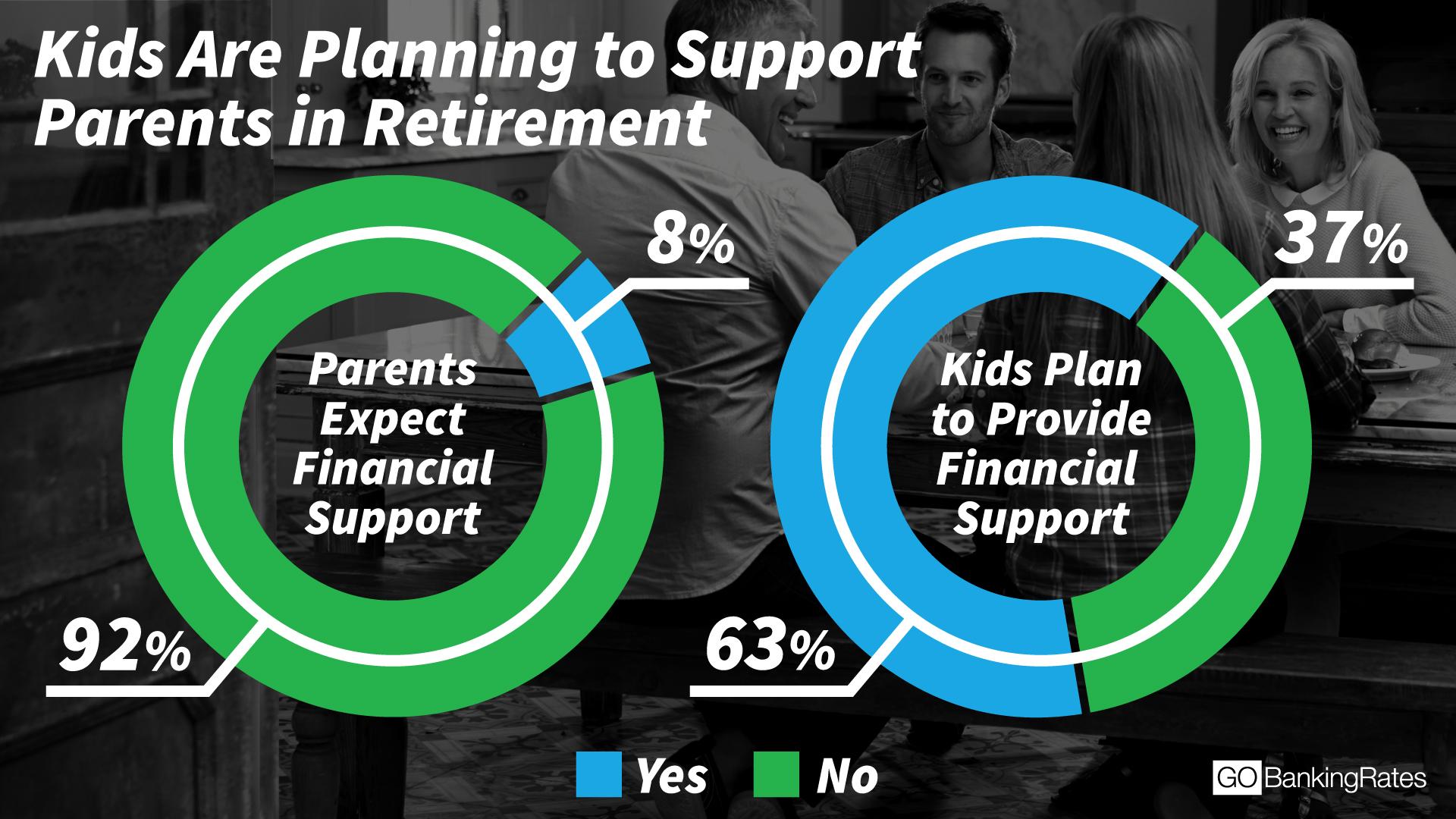 The discrepancy between expectations might be because parents don’t want to admit they might need help, but kids realize they’ll have to provide assistance, said Cheryl Kirsten, a senior wealth planner with SunTrust Bank. This breakdown shows how adult children responded to the survey options to characterize the amount of support they plan to provide:

“Helping your parents is one of the most noble things you can do,” Kirsten said. Taking care of parents financially, however, shouldn’t be done at the risk of your own financial stability, she said. The survey found that the level of support children are planning to provide varies by age — which might mean some are prioritizing their financial security over caring for aging parents.

Adults ages 35 to 44 also are less likely to expect to help their parents — 67 percent said they don’t plan to provide financial support. Most likely, they’re focused on supporting their own children. “If they have to pay for parents and kids, it will be financially draining,” Kirsten said.

Find Out: The Average Cost of Senior Care in Every State

Despite what parents expect and want, some might have no other option but to be taken care of by their children, said Michael Kay, a certified financial planner and president of Financial Life Focus in Livingston, N.J. Nearly one-third of adult children provide financial assistance to their parents or aging loved ones, according to a study by Care.com, a company that connects families with caregivers.

For starters, parents might not have enough set aside in savings to cover expenses without the support of their children in retirement. Thirty-four percent of Americans have $0 saved for retirement, the GOBankingRates’ 2017 Retirement Savings Survey found.

Parents also might have health issues that force them to get care from their kids, which can place a financial burden on them. Twenty-eight percent of family caregivers spend $5,000 to $19,999 per year on caregiving expenses and 14 percent spend $20,000 or more per year, according to a Caring.com report.

“If you think you’re going to need support … then start talking early,” Kay said. “Get over the blame and shame of it. You’re talking about your survival.”

Parents and Their Children Need to Talk About Finances

Parents need to have conversations with their children about their financial situation, even if they don’t think they will need support. “You need to talk about these things before you can’t,” Hastings said. If you don’t provide your kids with detailed information about your financial situation and how you want to be cared for if you can’t care for yourself, they might not have the information or resources they need to step in and help.

Unfortunately, these conversations often don’t happen. “Parents generally want to keep their finances secret,” Kirsten said. This was the case with her parents, she said. But she got them to talk by saying she wanted to be sure she knew what they wanted.

If parents are unwilling to talk about their finances, there are several ways children can start the conversation. You can start by saying you’re thinking about saving more for retirement or writing a will, then ask your parents how they’ve gone about this, Kirsten said.

You might tell your parents you heard a story about a family whose parents couldn’t take care of themselves in retirement and that it concerned you, Kay said. Then ask, “How could we avoid that problem?” he said.

Or you could ask them what you would need to do if something happened to them. Make sure they know you’re asking out of compassion and concern and aren’t trying to be judgmental, he said.

The sooner you can have a conversation with your parents, the more time you’ll have to prepare yourself financially if you find out that they might need support. You will likely need to make adjustments to your budget or position your assets to have access to cash if they need help, Kay said.

If you know you can’t afford to take care of your parents financially, let them know you can help with other tasks, Hastings said. “You’ve just got to do the best you can do with what you have to work with,” she said.

GOBankingRates also surveyed 262 children with one or both parents still living. They were asked the following: Do you plan to financially support your parent(s) when they are in retirement, or are you currently financially supporting your parent(s) in retirement? Children could choose one of four responses: 1) Yes, I plan to fully financially support them; 2) Yes, I plan to financially support most of their expenses; 3) Yes, I plan to provide financial support as needed; or 4) No, I do not plan to provide any financial support. Children also were asked the following questions: What is your approximate average household income?; Were you raised in the U.S.?; How many siblings do you have?; Are you willing to let your parents move in with you in their retirement, or do they live with you already?; and In what region of the U.S. were you raised? Responses were collected through Survata on June 21, 2017, and responses are representative of the U.S. online population. The margin of error is 5.1 percent. 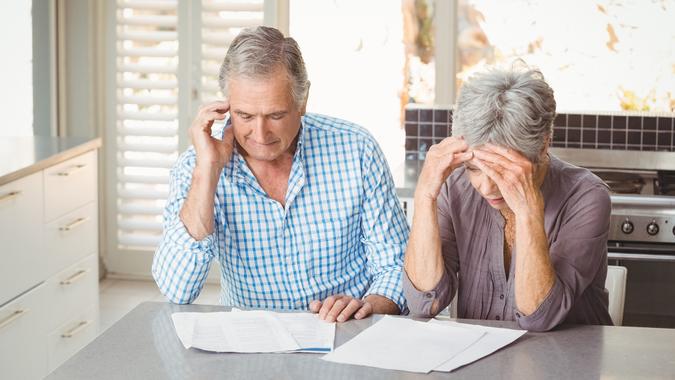 Secrets About Retiring That No One Wants to Talk About

Seek out the right retirement advice so you avoid key blunders.