Does Charging an EV Cost More Than Filling Up Your Gas Tank Today? 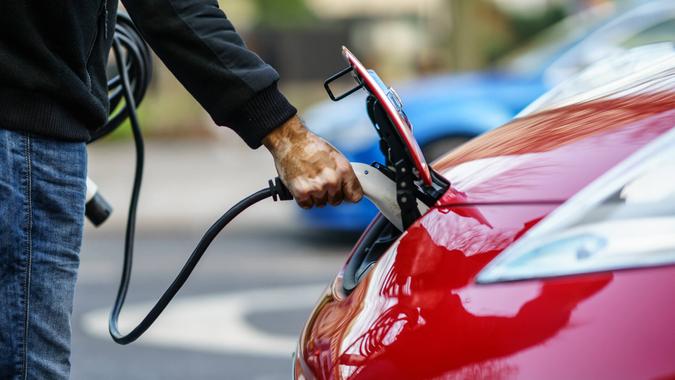 As gas prices hit record highs across the U.S. — with the GasBuddy app showing prices of $5.15, on the low end, in places like Bakersfield, California — drivers with electric vehicles may be feeling smug despite the ongoing economic turmoil.

See: Looking To Sidestep Gas Prices? Expect Long Delays for New Electric Vehicles (If You Can Find Them At All)
Find: 5 Electric Car Stocks to Watch (Besides Tesla and Apple)

Although experts say electricity rates could also continue rising in the coming months (perhaps due to increased demand and the rising costs of natural gas due to sanctions on Russian imports) it is still, for the most part, cheaper to charge an EV at home than it is to fill up an internal combustion engine (ICE) vehicle with gas. This is especially true if you take care to charge during off-peak hours, when electricity may be cheaper, or if you power your charger with solar panels on your home.

Fox Business reports that the Electrify America network charges as much as 43 cents per kilowatt-hour, which can be reduced to 31 cents for drivers who enroll in their membership program. Fox Business did the math and reported that it would cost $1,500 to drive 15,000 miles in a Ford Mustang Mach-E over the course of a year at the 31-cent charging rate.

A Ford Escape S, a traditional ICE crossover SUV rated at 28 city / 34 highway mpg (for an average of 31 mpg) would cost $2,080 over a year, given today’s average gas price of $4.30 per gallon. Both vehicles are comparable in size, per Fox Business. Choose a more fuel efficient Toyota RAV4 hybrid, however, which has a 40 mpg combined rating, and you’ll only pay $1,612 for the year, closely comparable to charging your Mustang Mach-E on the road at fast charging stations.

Of course, people have many reasons beyond fuel savings and gas costs to purchase an EV, a hybrid, or a conventional ICE vehicle. And, as electric prices continue to rise, charging stations could follow in the steps of gas stations and add surcharges to their service.

It’s also important to factor in the higher upfront costs of your EV if you’re looking to make the switch solely to save money on fuel costs. The base level Mustang Mach-E has a sticker price of $37,495 after federal tax credits, while the comparable-in-size Ford Escape S starts at just $27,255. You’d have to own the Mustang Mach-E for roughly 20 years before it would “pay for itself” in gas savings, assuming that the costs of charging or gas fill-ups remain the same. However, EVs also traditionally have lower maintenance costs, which can bring the total cost of ownership down.

Bottom line: If you want an EV, regardless of your reason, you should purchase one if you can afford it. You’ll enjoy short-term savings with a lower cost of ownership, with increased savings if you charge your vehicle at home. However, these savings are likely to be offset by the overall cost of the vehicle — or your monthly lease or loan payments.