Feeling the Pinch of the Marriage Boom? You’re Not Alone 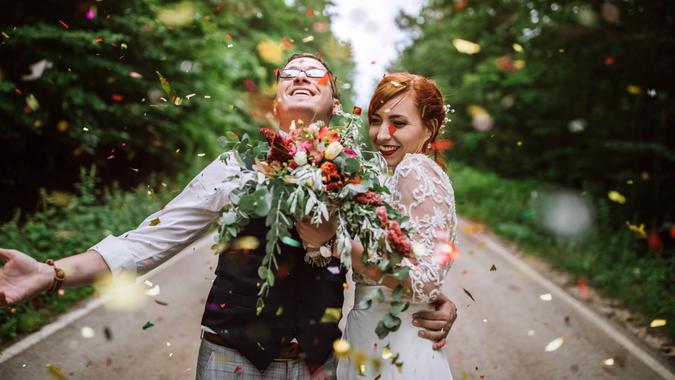 A wedding is much more than tying the knot — it’s expensive, and not only for the pairing couple and their families. While being part of the wedding party is a big honor, there’s a drawback. Gifts, formal wear, showers, and weekend trips can add up quickly. According to a recent LendingTree survey, members of the wedding party can also feel the financial hit and it can take a toll on friendships.

Discover: Best Ways to Merge Finances After Getting Married
Spotlight: Budgeting 101: How To Create a Budget You Can Live With

According to survey data, 51% of wedding party members felt pressure to spend. About 58% of bridesmaids and 61% of maids of honor felt pressured to spend on bridal-related expenses. Furthermore, 32% of bridesmaids and 42% of maids of honor said these financial pressures damaged their relationship with the bride. It wasn’t only women feeling the pressure. LendingTree data revealed that 43% of groomsmen and 50% of those who took the role of best man said the same

The main source of financial pressure was the bride, with 48% of bridal party members saying they felt pushed to spend. Only 21% said they felt pressured to spend on wedding party-related expenses by the groom.

Financial pressures even went so far as to push party members into debt. Overall, a third of bridal party members sustained debt. Around 68% used a credit card for bridal party expenses — 37% charging more than $1,000. The biggest expenses were attire, followed by bachelor or bachelorette parties. A quarter of those surveyed said traveling to and from the wedding venue was the biggest expense.

A 2017 Wedding Wire study said that bridesmaids can expect to spend around $1,200. Meanwhile, David’s Bridal estimates that the average bridesmaid could spend as much as $1,500 per wedding. According to the survey, some have even declined (37%) a wedding invitation due to related expenses.

Heather Z. Lyons, a licensed psychologist, told LendingTree to approach the topic of financial boundaries carefully. “When preparing to have the conversation, the three most important strategies are to do it early, do it directly, and do it kindly. Those getting married are so overwhelmed with planning and are also taking a financial hit, so it might be difficult for them to put themselves in your shoes,” she advises.