A Look at Our Impulse Shopping in 2021 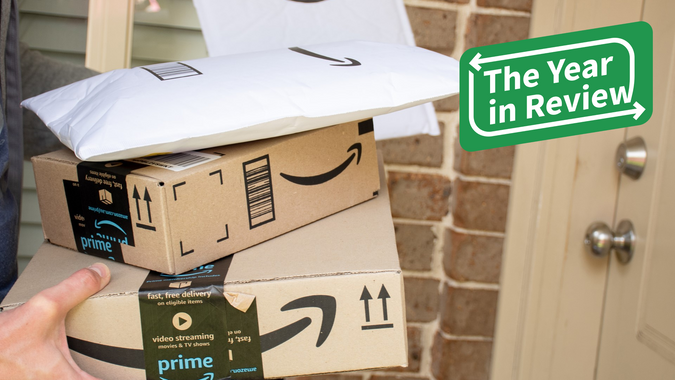 By the time 2021 rolled in, Americans were, for better or worse, acclimated to living in the new normal, aka, an ongoing pandemic. The economy started picking up following a year of devastation, the unemployment rate gradually dropped, the massive vaccine rollout commenced and, as if awoken from a stupor of fear, consumers began to spend more freely than they did in 2020…perhaps a little too freely.

Make Money: Target, Amazon and 4 More Retailers That Will Reward You for Turning In Your Old Stuff
Year in Review: Take a Look Back at the Top Money Topics and Happenings of 2021

Numerous polls found that consumers were spending more this year than in 2020 — and not just on essentials like bills. In what was perhaps an effort to feel better and safer amid the normalization of chaos, we spent more on things that may fall under the category of impulse buys. Slickdeals, a social platform for shopping, found that people spent an average of $276 every month —  51% more than the average $183 per month they reported spending in April 2020.

Impulse buys are tough to quantify because it’s difficult to objectively distinguish what is bought extraneously versus what is bought out of necessity. That said, as e-commerce becomes ever more popular, online retailers are following in the footsteps of their brick-and-mortar ancestors and heavily pushing impulse behavior.

See: All the Products Supply Chains Have Messed Up for You

“As online players experiment with and master a browsing experience (as opposed to only a highly-focused search focused-one), they attract impulse purchases as a natural result,” said Guru Hariharan, CEO of CommerceIQ, an e-commerce management platform.

Additionally, we know that 2021 was, for many, an incredibly stressful year wherein the number of deaths due to COVID-19 surpassed 2020’s toll. Bad times often equate to bad decisions.

“Research has shown a relationship between negative emotions and impulsive behavior,” said Nika Kabiri, JD PhD, a decision-making expert. “Whether that behavior involves shopping or something else, the idea is that we tend to act impulsively to manage our feelings. In other words, there is science to back up the short-term effectiveness of ‘retail therapy.'”

So what were we impulsively buying? Again, it’s hard to say with absolute certainty, but here’s what we know consumers bought more of in 2021.

“People are impulse spending more in the grocery store, translating to treating themselves,” said Julie Ramhold, consumer analyst with DealNews. “It may be that they just can’t deal with the ongoing stress of everything else so they’re impulsively buying convenience foods to make dinner easier or maybe they’re just buying things to treat themselves. Grocery delivery services started booming during the pandemic and many consumers are still using them today, which makes it even easier to impulse buy groceries.”

See: Smartphones, Cookies and Other Items That Got Cheaper in 2021

“Not surprisingly consumers were panic buying things like toilet paper and hand sanitizer when the pandemic first began, but while the impulse spending on those items may have slowed down, they’re still buying a variety of household supplies,” Ramhold said. “This may very well be related to the fact that people are spending more time at home and noticing things they need, or maybe tackling projects like organizing and decluttering because they’re more aware of what they have.

Save More: 4 Costco Items That Have Remained Cheap for Years

“Takeout is another business that grew during the pandemic and it doesn’t really show signs of slowing down,” Ramhold said. “In fact, one of our local food delivery services has actually expanded to several more restaurants, upgraded their website, and is even widening the delivery area. While that’s anecdotal, the truth is that takeout is still a convenient way for consumers to have dinner and impulsively ordering from a favorite restaurant is just easier than having to figure out dinner on a weeknight based on what’s in the pantry.”

Whatever Amazon Was Selling

“In 2021, Amazon reached a 50% share in the ecommerce market,” said Basheer Alebdy, founder at Dabash Deals. “One can imagine that the number will only increase due to the constant demand for products and the brand’s authenticity. Amazon sells more than 12 million products in a year, which is a staggering number considering the diluted market.”

Good To Know: Unplug These Appliances That Hike Up Your Electricity Bill

The Future of Impulse Buying Is Strong

With COVID-19 still roaring strong, feelings of needing to buy our way to comfort and safety will likely continue, while at the same time, retailers have become savvier in their ways to lure us into a buy we don’t exactly need to make.

“Stores have made it easier to impulse buy,” Ramhold said. “Whether it’s suggestions for what other shoppers have purchased, or outright asking if you want to add something to your order, or even having a minimum free shipping threshold, consumers will find it easy to impulse buy online whether they intend to or not. It’s especially prevalent with free shipping requirements because many shoppers may get close to the minimum and then just need something small to push them over the edge, so they’ll start shopping the site looking for something else they want.”