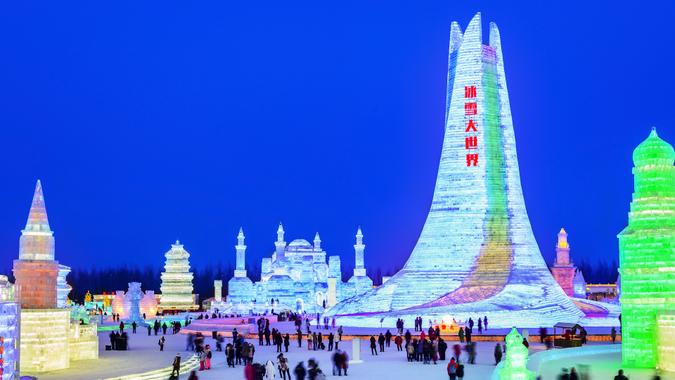 Up for a winter adventure, no matter where it is? And the colder, the better? Look no farther than the Harbin International Ice and Snow Sculpture Festival, held each winter in Harbin, the capital of Heilongjiang, the northernmost province in China.

It’s a place rich in history but also surrounded by fun each winter. If your interest is piqued, be warned. A visit there is pricey.

What Is the Harbin Ice Festival?

Harbin is located in northeast China, about 830 miles from the capital city of Beijing, and its culture includes Russian, European and Japanese influences. It is the center of economy, politics and culture in its region and known as the Ice City. It has emerged as one of China’s major tourist destinations.

That, in large part, is due to the Harbin International Ice and Snow Sculpture Festival, which annually since 1985 has transformed the city into a winter wonderland. It is the world’s largest ice festival and also has the longest duration, lasting almost two months. View the sculptures by day as the sun glistens off them. By night, the lights that adorn both the inside and outside of the sculptures offer a spectacular scene.

The festival is divided among three main venues: Sun Island, where the art of snow sculpting is on full display; Zhaolin Park, with its display of ice lanterns; and the primary site, Harbin Ice and Snow World, referred to as an “Ice Disneyland.”

When Is the Harbin Ice Festival?

In early December, workers harvest the ice from the Songhua River in Harbin, then carve and build the structures. As they continue to complete the finishing touches, the Harbin Ice Festival unofficially opens around Christmas.

The coming festival officially opens Jan. 5, 2023. There is no closing date; the festival ends when the snow melts in late February or early March. Visitors must keep in mind the cold temperatures they will face. During festival time, the daytime highs reach 8 degrees on average, with the nighttime temperatures a frigid 13 below.

Locals recommend visiting at one of three times to avoid the crowds:

How Much Does the Harbin Ice Festival Cost?

A one-day entrance fee ranges from $42 to $49 for Sun Island and Harbin Ice and Snow World, according to the website China Highlights. Zhaolin Park is free to enter.

Travel to the Harbin Ice Festival

Getting to Harbin from the United States is an expensive proposition. The much cheaper — though still costly — prospect is to fly to Beijing and take a high-speed train the approximately 830 miles to Harbin. According to the website China Discovery, the train costs between $79 and $182, depending on the travel class and the train you ride. Some trains are faster than others, but the trip generally is five to six hours.

You also can fly directly to Harbin, but the cost might break your budget. A comparison cost of the least-expensive round-trip flights to Beijing and Harbin, sourced from Expedia in mid-September and using the travel dates of Jan. 19 to 26:

Harbin has hotel chains that westerners will recognize, including the Marriott brands, Ritz-Carlton, Holiday Inn Express and Crowne Plaza — as well as local properties. During our travel period, the cost of a three-night stay at the Mercure Harbin Sophia Church Hotel is $181, with the Crowne Plaza Harbin Songbei costing $476 and the JW Marriott Harbin River North a total of $701.

You’ll also pay ground transportation from the hotel to the festival site.

If you want to attend the Harbin International Ice and Snow Sculpture Festival and have never been to that extreme northeastern part of China, it might be worth contacting a travel agent for guidance. The U.S. has travel agencies experienced in Asian excursions, and Chinese tour groups offer all-inclusive packages for your stay in Harbin but don’t include transportation there.

If you do venture to Harbin, the locals advise you to dress warmly and to keep your camera in your pocket to keep the battery from rapidly draining in the cold. You’ll want to take lots of photos.