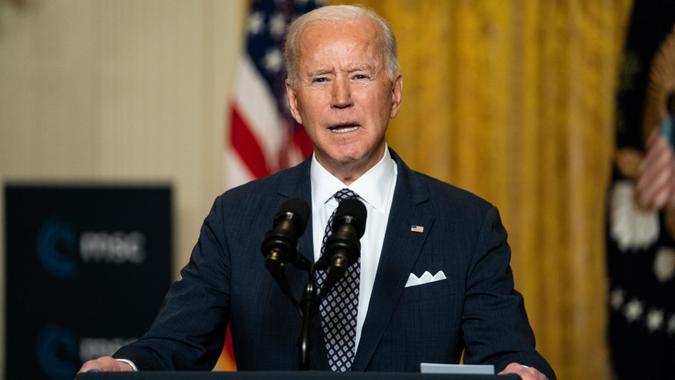 President Biden is expected to announce major federal tax hikes, the first in 30 years, according to Bloomberg.

The proposed tax hikes would include raising the corporate tax from 21% to 28%. Other key measures would reportedly increase the income tax rate on people making more than $400,000; expand the estate tax; pare back tax preferences on pass-through businesses such as limited-liability companies; and set up a higher capital gains tax rate for individuals making at least $1 million, according to Bloomberg, citing people familiar with the plan.

The tax hikes would probably come in the next major legislation package, which seems to be the infrastructure bill. They aim to raise revenue for new spending programs and would repeal portions of the Tax Cuts and Jobs Act signed into law by Donald Trump in 2017.

In a briefing yesterday, Press Secretary Jen Psaki said that the President “remains committed to his pledge from the campaign that nobody making under $400,000 a year will have their taxes increased.”

See: Fortune 500 Companies That Haven’t Paid Federal Taxes Recently
Find: How Much the Rich Would Actually Pay If They Had Higher Tax Rates

Asked about Sen. Warren’s proposed wealth tax, Psaki said that Biden had a different proposal he put forward. “But, you know, as is always the case with democracy in action, when it’s the appropriate time, I’m sure they’ll discuss and he will discuss with others what their views are of how to address this moving forward,” she said.

An analysis by the Tax Policy Center finds that Biden’s tax proposals would raise about $2.1 trillion over the 2021-2030 budget period, or about 0.8% of gross domestic product.

See: Elizabeth Warren’s Wealth Tax Is Likely Unconstitutional
Find: The Major Tax Changes for 2021 You Need to Know About

The latest major tax overhaul was in 1993. The Omnibus Budget Reconciliation Act, signed into law by President Clinton, imposed new higher tax rates of 36% and 39.6%; permanently extended the itemized deduction limitation and the personal exemption phaseout; and increased the corporate tax rate to 35% on income above $10 million, according to the Tax Policy Center.

“I don’t think it is an understatement to say the current partisan environment is more severe than 1993,” Ken Kies, managing director of the Federal Policy Group and a former chief of staff of the congressional Joint Committee on Taxation, told Bloomberg. “So you can draw your own conclusions” about prospects for a deal this year,” he said.

Roderick Mann, author of “Navigating the New Normal” and financial consultant, tells GOBankingRates that “as national debt approaches $30 trillion, with a debt-to-GDP ratio as high as it was following WWII, both expenditures need to come down and tax receipts need to go up. That is simply the math.”

See: Don’t Miss These 4 Tax Breaks in the $1.9 Trillion Stimulus Plan
Find: FICA Tax Changes for 2021 — How Will Your Paycheck Change?

Mann adds that we are today in the greatest wealth gap in American history. “We are approaching a thousand billionaires while over half of the Americans have less than $1,000 to their name. Shrinking the wealth gap will mean increasing marginal tax rates, particularly on high incomes. But we are getting increasing interest and traction on an age-old concept called ‘soaking the rich,'” he says.

“The wealthy will quite likely face assessments on their wealth, from some percentage of net assets to higher inheritance taxes. At the same time, more government transfers to the poor will have the effect of shrinking the wealth gap. Giving away money was easy for the government, it makes their voters happy. Taking away money with these new proposals? Not so easy.”

And today, the Republican Ways and Means Committee account tweeted: “Democrats said they wouldn’t raise taxes. They didn’t keep their promise. Biden is planning to slap American workers and families with the largest tax increase since 1993.”