National Online Bank Day is Oct. 8. It’s hard to imagine there was once a time when all banking was conducted at actual brick-and-mortar financial institutions. Even the simple task of checking your account balance used to require a trip to the bank. Today, you can check your account balance, send money, withdraw cash, transfer funds and more — right from your smartphone, computer or tablet.

Although so many people take advantage of the digital banking tools offered online today, most people don’t know the full history of online banking. Learn how this innovative form of banking evolved and gained mainstream popularity — and also learn how you can save money with an online bank.

The History of Banking via the Internet

Banking has come a long way since the days of regular visits to tellers. Now a customer can take a picture of a check with his phone to deposit it into a savings or checking account and receive SMS banking alerts in the form of texts. The evolution of online banking started in the 1980s when the definition and the practice of internet banking were far different than what exists today.

What Is Online Banking?

The early version of what was considered online banking began in 1981. New York City was the first place in the U.S. to test out the innovative way of doing business by providing remote services as four of its major banks — Citibank, Chase Manhattan, Chemical Bank and Manufacturers Hanover — made home-banking access available to their customers.

The Bank of Scotland offered customers the first UK internet banking service called Homelink. People had to connect to the internet through their TVs and telephones to pay bills and transfer money. What is now known as online banking was formed during this time.

Find Out: How Long Does It Take to Have a Payment Post Online to Your Bank

In October 1994, Stanford Federal Credit Union became the first financial institution in the U.S. to offer internet banking to all of its customers. A year later, Presidential Bank became the first bank in the country to offer customers access to their accounts online. The advantages of internet banking systems began to catch on as many other banks soon followed Presidential Bank’s lead.

The evolution of internet banking continued with one of the first truly successful internet-only banks, NetBank — which was founded in 1996 and closed in 2007.

Are You a Customer? How to Find and Use Your NetBank Login

1999: Bank of Internet USA Is Founded

Bank of Internet USA was officially founded as part of the incorporation of BofI Holding Inc. on July 6, 1999, making it America’s oldest internet bank; it opened for business on July 4, 2000. The conveniences and perks of internet banking became obvious to many customers: higher interest rates online than with traditional banks, greater access to accounts, and online banking transfers, to name a few.

In 2001, Bank of America made history as the first financial institution to gain more than 3 million online banking customers, about 20 percent of its customer base at the time. More people were starting to realize the advantages of online banking.

As the evolution of online banking continued, it slowly gained popularity in e-commerce. When big-name banks began to offer online products and services, e-banking seemed to gain legitimacy for consumers. By 2006, online banking had become mainstream: An overwhelming 80 percent of banks in the U.S. were offering internet banking services.

Related: 6 Banking Services That Will Be Obsolete in 10 Years

In 2009, Ally transformed GMAC Bank into what we know today as Ally Bank, joining the ranks of internet-only banks. In recent years, it has repeatedly been named the top online bank in GOBankingRates’ annual Best Banks rankings.

2010: Online Banking Is Growing Faster Than the Internet

In a 2010 survey on consumer billing and payment trends, Fiserv, a financial services technology company, found that online and mobile banking were growing at a faster pace than the internet. Online banking has continued to evolve as more innovations and conveniences have been offered.

Bank of Internet USA has introduced a number of new and technologically advanced products and services since its inception, including mobile internet banking apps for the most popular mobile devices, mobile check deposit, Popmoney for money transfer via text or email and EMV-chip debit cards.

Online banking has become so widespread today that customers expect accounts to include free online banking, and many banks only operate on the internet, effectively decreasing overhead costs to offer more competitive rates on savings accounts and enjoy higher profit margins.

Find Out: How to Open a Bank Account Online

Today, online banking is one of the most popular ways for people to manage their money. Banks ensure internet banking security for customers by using encryption technology — such as secure sockets layer — verifying internet banking account activity, incorporating account safety features and constantly warning consumers of ways to avoid threats such as identity theft.

The Future of Online Banking

Despite the slow adoption rate in the early part of the history of internet banking, online banking has proved it’s here to stay. Online banking features and services have greatly evolved from the first days of internet banking history — from the need to use a landline to pay bills in the 1980s to having the ability to transfer funds, pay bills and deposit checks with just the click of a mouse or on a mobile device today. As technology continues to advance, banking online will likely become even easier and more ingrained in the average consumer’s lifestyle.

Click through to read more about how Prime members feel about banking with Amazon.

Barri Segal and Laura Woods contributed to the reporting for this article.

Ruth joined the content team in 2015. Before joining GOBankingRates, Ruth wrote and edited in a range of communications positions with a focus on SEO content. She earned her B.A. in English and B.S. in Communication Studies at the University of Texas at Austin. Read more. 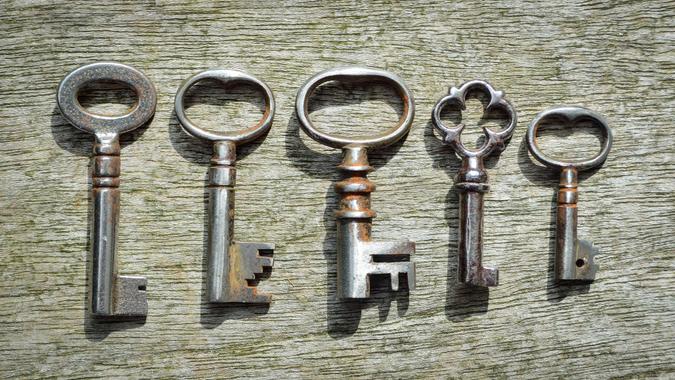 Can You Trust Your Bank? 5 Key Things To Look For

Traditional banks should take a cue from financial startups.