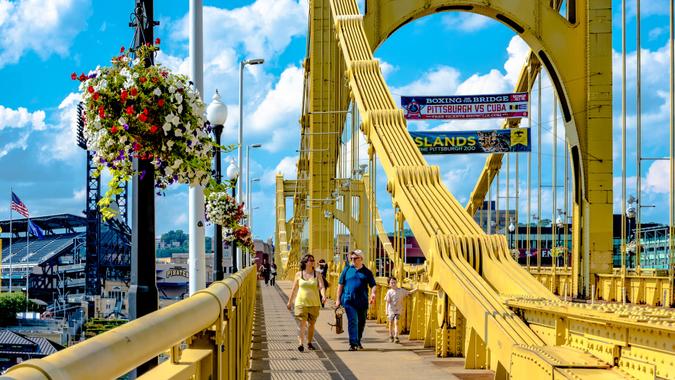 The East Coast of the U.S. sometimes gets a bad reputation as being either overpriced or not having a high quality of living. But the truth is there are plenty of cities on the East Coast that are both affordable and wonderful places to live.

To help narrow down cities that fall into these parameters, GOBankingRates drew data from various sources to determine which East Coast cities have a low average monthly expenditure but still rank high on the livability scale (per AreaVibes). The three cities that won out as both cheap and super enjoyable might surprise some readers, but likely not the residents who call these places home.

Roanoke, Virginia, came in as the most affordable East Coast city that still had a high quality of life in the study.

For starters, the city had the lowest cost of living within these parameters, at $51,582 per year versus the national average of $61,334. That’s a discrepancy of over 15%. Meanwhile, the city’s livability index came in at 75, which is based on everything from city amenities, crime levels, the cost of living, housing, employment, schools and even user ratings.

One of the factors that makes Roanoke so livable is the low cost to rent a one-bedroom apartment. Whereas Roanoke renters only pay $902.83 on average, across America, the average one-bedroom renter pays $1,067.80 — or about 18% more.

Pittsburgh, Pennsylvania, still carries the reputation of being an old steel town, but the reality is that Pittsburgh is both a vibrant and inexpensive place to live.

The city shares the same livability score as Roanoke and its annual cost of living is only slightly higher. Whereas Roanoke residents have a cost of living of about $4,300 per month, those in Pittsburgh pay just $4,472 per month. Rent for a one-bedroom apartment is just under $1,000; more than Roanoke but still below the national average. Overall, residents of Pittsburgh pay about 12.5% less than their fellow Americans.

Concord, North Carolina — not to be confused with Concord, New Hampshire — is another East Coast city that scores high in both quality of life and low costs. In fact, Concord has one of the highest livability rankings in the country, at 83, and it still manages to offer a low cost of living compared with the rest of the nation.

Rents for a one-bedroom apartment in Concord come in at $1,035 and overall monthly expenditures rack up to $4,768.72, both a few percentage points below what the typical American household spends. On an overall basis, the cost of living in this North Carolina city runs nearly 7% below the national average.

What About Other Cities?

New York City, for example, is both expensive and only has a livability score of 67. The same can be said of both Boston and Miami, which have livability scores of 59 and 65, respectively. Combined with the relatively high expenses in all of those cities, they don’t fall into the category of “affordable with high quality of life.”

This all goes to show just how rare that designation is, and how Roanoke, Pittsburgh and Concord deserve some serious consideration for those looking to up their lifestyle while lowering their costs.

Methodology: To find the most affordable cities on the East Coast with a high quality of life, GOBankingRates first used ApartmentList data to find (1) average 2022 one-bedroom rents. GOBankingRates then used Sperling’s Best to find cities’ (2) overall average cost-of-living index. Next, GOBankingRates used (3) average annual expenditure data from the Bureau of Labor Statistics 2020 Consumer Expenditure Survey in order to determine how much an East Coast renter might spend in each city per month. GOBankingRates then ranked qualifying cities by least to most average monthly expenditure. In order for a city to be qualified for the study, it (4) must have a livability score of 75 or above, as sourced from AreaVibes. All data was collected on and up to date as of July 7, 2022.