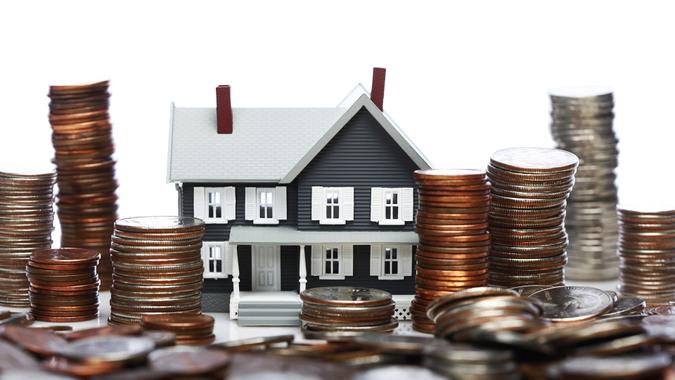 See: 10 Dollar Store Items That Aren’t Even Worth the Buck
Find: How To Borrow Money on Cash App

January saw the fourth largest in the last three-and-a-half decades and came in above the 18.9% price increase logged in December, according to the S&P CoreLogic Case-Shiller Index, which was released on March 29. The annual 10-City Composite rose 17.5% in January, up from 17.1% the previous month. The 20-City Composite posted a 19.1% year-over-year gain vs. an 18.6% increase in December.

January’s figures put at least a temporary halt to the slower increases seen at the end of 2021.

“Last fall we observed that home prices, although continuing to rise quite sharply, had begun to decelerate,” Craig J. Lazzara, Managing Director at S&P Dow Jones Indices, said in a press release. “Even that modest deceleration was on pause in January. The 19.2% year-over-year change for January was the fourth-largest reading in 35 years of history.”

The rapid acceleration in home prices could ease off in coming months if housing demand falls amid rising mortgage rates. As GOBankingRates previously reported, the average 30-year fixed mortgage rate was 4.42% as of March 24, according to Freddie Mac. That’s up from 3.11% as recently as December.

See: Should You Keep Your Money in the Bank or Invest In Real Estate?
Find: Metaverse Real Estate Mortgages: The Future of Property Investment?

“The macroeconomic environment is evolving rapidly,” Lazzara said. “Declining COVID cases and a resumption of general economic activity has stoked inflation, and the Federal Reserve has begun to increase interest rates in response. We may soon begin to see the impact of increasing mortgage rates on home prices.”