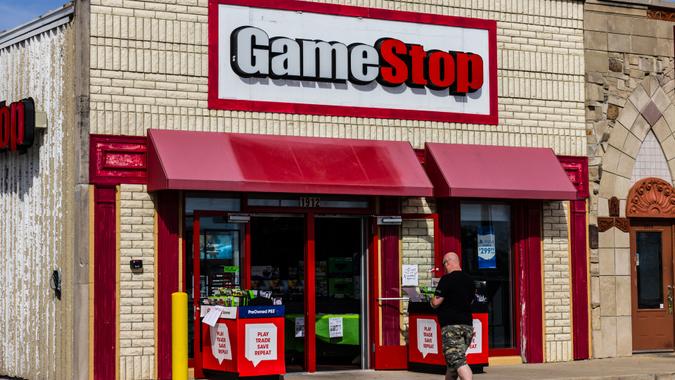 A factor that could be driving this most recent spike is the resignation of GameStop CFO Jim Bell, who will step down on March 26, 2021.

The company said it has initiated a search for a permanent CFO “to help accelerate GameStop’s transformation,” adding that if a permanent replacement is not in place at the time of Bell’s departure, it intends to appoint Diana Jajeh, who is currently senior vice president and chief accounting officer, to the role of interim chief financial officer.

See: After GameStop, Regulations Are Coming for Wall Street – But Will They Reign in Everyday Investors Instead?
Find: GameStop Stock Has Crashed and Burned – How to Recover If You Went All In

Last month, retail traders on the subreddit group WallStreetBets, who were intent on taking down hedge-fund short sellers by buying shares of stocks that didn’t seem to have much of a chance of success, sent stocks, including GameStop, soaring (and then crashing).

The  market volatility has brought the attention of regulators, and last week, Robinhood CEO Vladimir Tenev testified before Congress to address the market frenzy that ensued when the app halted trading of certain stocks, including GameStop, that are popular on the Reddit subthread.

The saga has also brought the ire of some experts, including Charlie Munger, Daily Journal chairman and Berkshire Hathaway vice chairman. In an interview with Yahoo! Finance yesterday, Munger shared his views on the recent market frenzy, calling it “very dangerous” and “really stupid.”

Munger said the frenzy “is fed by people who are getting commissions and other revenues out of this new bunch of gamblers, and of course, when things get extreme, you have things like that short squeeze. It’s not generally noticed by the public, but clearinghouses clear all these trades, and when things get as crazy as they were in the event you’re talking about, there are threats of clearinghouse failure,” he told Yahoo! Finance.

“So it gets very dangerous, and it’s really stupid to have a culture which encourages as much gambling in stocks by people who have the mindset of race dog, racetrack bettors, and of course it’s going to create trouble as it did. And I have a very simple idea on this subject. I think you should try and make your money in this world by selling other people things that are good for them, and if you’re selling them gambling services where you rake profits off the top like many of these new brokers who specialize in luring the gamblers in, I think it’s a dirty way to make money, and I think we’re crazy to allow it,” Munger added.