Inflation Investing: When To Buy and When To Hold 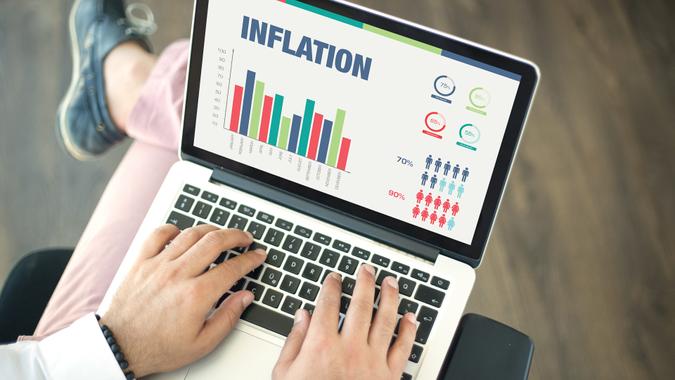 One of the great things about investment markets is that there’s always an opportunity to make a profit, even when things are seemingly unfavorable.

Small Business Spotlight 2022: Nominate Your Favorite Small Biz by July 25
Have You Seen These? 22 Side Gigs That Can Make You Richer Than a Full-Time Job

For example, when inflation rises, it costs companies and consumers alike more to build, produce and consume things, and this is generally seen as a negative. Yet, there are still plenty of investments that do well during an inflationary environment, with some even thriving. Thus, the question isn’t so much when you should buy and hold during inflation, but what you should be owning.

Here are a few investments that typically prosper during inflationary environments, along with a few examples of ones you might want to avoid.

Treasury Inflation-Protected Securities, or TIPS, have inflation protections built into their very design. TIPS are issued by the U.S. government and carry the same backings and guarantees as all Treasury securities, such as T-bills. However, TIPS adjust their principal value upward every year in line with inflation.

As the base value of the bond increases, so too does that interest earned on the bond, making these highly defensive securities in inflationary periods.

The stock market in general tends to sell off sharply at the first whiff of inflation. This is because the stock market is a leading indicator; and, generally speaking, spikes in inflation are countered by the Fed raising interest rates.

But, after the initial downdraft, buyers tend to return to the stock market because it offers growth characteristics that can counter the diminishing purchasing power caused by inflation. In other words, stocks typically have the ability to outgrow inflation much more than other investments.

Commodities can fluctuate sharply in price when inflation accelerates, in part because they are a big part of what goes into the calculation of the inflation rate itself.

In particular, energy companies tend to be good bets in inflationary periods because they have a nearly unlimited capacity to raise prices. When the price of oil goes up, for example, so too do its end products, including gasoline.

Most Americans have little choice when it comes to their energy consumption, as they must still drive their cars to work and heat or cool their homes. Certainly, in a pinch workers can use public transportation or carpool, and they can suffer through unpleasant temperatures at home, but these are often options of last resort. Thus, commodity producers, especially energy companies, can be a defensive holding during an inflationary period.

In an inflationary environment, home prices tend to rise, and rents tend to follow. Landlords often raise rents to help counter the inflationary pressures they feel themselves, from rising energy bills to the increased cost of maintenance.

Regardless of what inflation is doing, renters still need a place to live, so landlords typically have the ability to raise rents without losing their tenants. This can make rental properties a good thing to own in an inflationary environment.

Although markets aren’t a zero-sum game, there are typically both winners and losers in any environment. Just like there are investments that benefit from rising inflation, there are others that suffer. Here are some of the options that you might want to avoid:

Rising inflation is nearly always met with rising interest rates. This is due to a combination of the Fed raising rates to help corral inflation and investors demanding a higher return on their money.

Long-term bonds are the most susceptible to rising interest rates, and their prices fall more than those of short-term bonds. At the start of an inflationary cycle, owning a long-term bond is one of the last places you want to be, as the price of your investment can fall sharply.

Think of it this way: If you own a 30-year bond paying 3% and newly issued bonds pay 5%, what investor will buy your bond? The answer is that none will until the price of your bond falls enough to the point where its yield matches that of newer bonds.

Companies With No Pricing Power

Although the stock market can be quite resilient to rising inflation, there are individual stocks that don’t perform as well. While some companies can raise their prices to help offset rising material and labor costs, not all can.

Airlines, for example, can raise fares to a certain degree, but typically not to the point that they cover the increasing costs of fuel and onboard services. Whereas consumers might have to pay for food and energy no matter what the cost, few people are forced to fly. This limits the price that airlines can charge for their services, which leaves them vulnerable to rising costs.