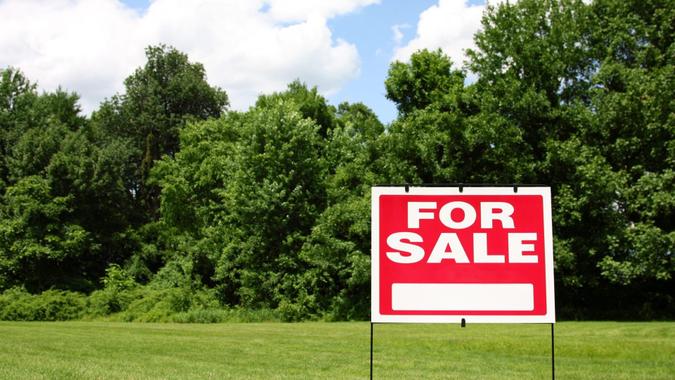 There’s no doubt that buying vacant land can be a great investment. But as with any investment, it’s not for everyone. Unlike many other investments, land doesn’t pay any income, doesn’t trade on any exchange and typically requires specialized knowledge to pick a winner. But that doesn’t mean that you should overlook it as an investment.

Read More: Everything’s Bigger in Texas — Including Taxes, Which Are Outpacing California
Looking To Diversify in a Bear Market? Consider These 6 Alternative Investments

In fact, some of the obstacles that prevent people from investing help make land a great opportunity for others. Here are some of the primary reasons why buying vacant land can be a good investment, along with a quick look at its inherent risks.

Large tracts of land can cost millions of dollars, but on a relative basis, land is typically cheaper than many other investments. You’ll always pay more on a per-square-foot basis for developed properties than vacant land, and you’ll also have fewer ancillary costs. When you buy land, for example, you won’t have to deal with utility costs, a mortgage or property improvements and maintenance.

For most investors, an illiquid market is a negative, not a positive. After all, if an asset is illiquid, that means it is difficult to sell. However, this often opens up opportunities for investors in the know. Since many investors are scared away from illiquid investments like land, it can often be purchased for below-market valuations. An astute investor with an understanding of the appreciation potential of a piece of land can benefit from its illiquidity as it will keep away competitive offers.

Although you may run into zoning or other regulations if you choose to develop it, restrictions on a piece of vacant land are typically few to none. Other than the paperwork required to transfer the title of the land to your name, you generally won’t have to file any additional forms with any regulatory authorities.

Unlike stocks, bonds or mutual funds, land is a tangible asset. While you can bend down and touch the actual ground that you will own if you buy a vacant lot, you’ll never be able to touch your actual mutual fund. Even a stock certificate is merely a legal document indicating ownership and not an actual, physical portion of a company. When economic times turn difficult, investors tend to cling to physical assets rather than financial ones, something that helps support the long-term value of land.

Low Risk of Damage or Destruction

If you buy a plot of vacant land, there’s little to worry about in terms of damage. As your land has no structures on it, there’s no risk of fire, property destruction or “acts of God,” such as hurricanes. Certainly, vacant lots aren’t completely without risk, as squatters or vandals can litter or deface your property. But you won’t have to worry about the destruction of completed buildings on your vacant lot, which can cost money, time and lost revenue, even if you have insurance.

One of the most famous observations regarding land as an investment is that “they aren’t making any more of it.” Unlike houses, which are built by the thousands every year, all the vacant land in the world already exists. Sure, some developed properties may be razed and turned into lots, but with extremely limited exceptions, there won’t be any more land “built” for investors to purchase. Although there is certainly a lot of land available, the fact that the supply of land is ultimately limited helps contribute to its value.

Although there are many reasons why buying vacant land can be a good investment, it’s not without its risks either. Some of the main risks include the following.

Land Can Be Hard To Value

Unlike stocks, which can pay dividends, or rental properties, which generate monthly checks, land doesn’t pay any income. If your land doesn’t appreciate over time, you may never see a return from your investment.

Can Be Hard To Sell

If another buyer never materializes for a property you want to sell at the price you want, you may never realize a profit. Even under the best conditions, it can take weeks or months to sell even a desirable vacant lot.

While vacant land may appreciate all on its own, one of its greatest benefits is the opportunity it offers for development. A luxury condominium complex built on a vacant lot, for example, may dramatically improve both the current and future value of your land – but it may come with a large cost as well. But if you’ve spent all of your investment money on the land itself, you may not be in the position to improve your lot and make it more valuable.