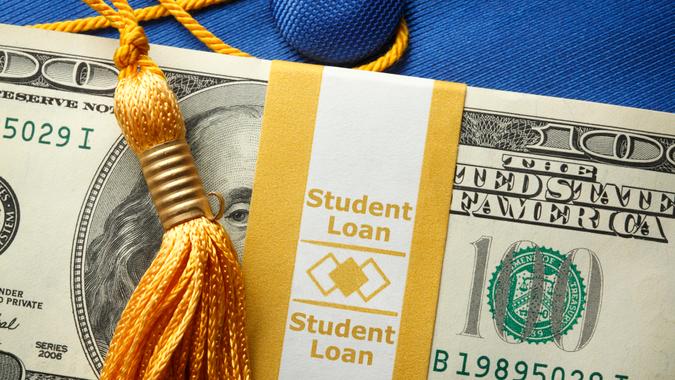 Much of the public focus on President Joe Biden’s loan forgiveness plan has zeroed in on two things: the extension of the federal student loan payment pause until the end of the year and the $10,000 in loan forgiveness to individual borrowers who meet certain income requirements.

But for many borrowers, the biggest long-term impact is an income-driven provision that would permanently reduce their monthly payments.

As previously reported by GOBankingRates, the Biden plan includes a U.S. Department of Education proposal that would cut monthly payments in half for undergraduate loans, raise the amount of income that would be protected from repayment, forgive some loan balances 10 years earlier than current rules allow, and simplify the process of enrolling in certain payment plans.

Justin Short, who had nearly $53,000 in student debt when he graduated from the University of Missouri a decade ago, told CNBC the 5% income cap will be “life-changing,” and also said that he’ll benefit from the higher threshold for non-discretionary income.

Julie Peller, executive director at Higher Learning Advocates, had a similar take, telling CNBC that the Education Department proposal could be a “game changer” for millions of borrowers.

“[It’s] a big recognition that people have many other things on their plate (financially),” Peller said.

She also called the interest provision “a really big deal” for low-income borrowers because, under the current system, if a borrower’s income is low enough their loan payment might not even cover the monthly interest on their loans. This means the remaining unpaid interest gets capitalized and added to the loan principle.

“[It] essentially balloons the payments and puts people in a cycle of never being able to make forward progress on their student loans,” Peller said.

Take Our Poll: How Do You Typically Split the Restaurant Bill?
More: 22 Side Gigs That Can Make You Richer Than a Full-Time Job

But as CNBC noted, there are still some important details that need to be ironed out in the coming weeks, including who will be eligible for the program, which types of loans qualify and how people can enroll.