Barbara Corcoran: Why Everyone Should Set Aside ‘Mad Money’ 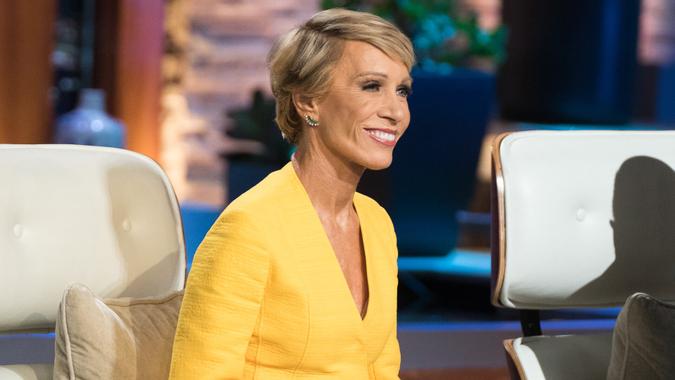 Barbara Corcoran is the founder of the real estate brokerage The Corcoran Group and a Shark and executive producer on ABC’s “Shark Tank.” She is the author of “Shark Tales: How I Turned $1,000 into a Billion Dollar Business!” and host of the podcast “Business Unusual With Barbara Corcoran” (and on Spotify), as well as a motivational speaker and media personality.

Recognized by GOBankingRates as one of Money’s Most Influential, here she shares what she looks for in the entrepreneurs she invests in, how she became a female success story during the time of the “old boy network” and the importance of having some fun with your money.

What do you look for when choosing where to invest on ‘Shark Tank’?

I always ask myself two questions about the business: “Does this product make sense? And will people buy it?” But much more important is sizing up the entrepreneur because I want to choose people who will make their business a success, and that’s not so easy.

To start, I never choose a person I don’t like because I like to like who I work with. I do much better with people I like — we all do. I also ask myself, “Do I trust them?” Then the hard work begins, which is trying to figure out quickly if they have the important traits shared by every one of my successful entrepreneurs. I’m looking for someone who can “sell” their product, someone who’s comfortable taking risks and, most importantly, someone who knows how to bounce back from failure. I find that the only difference between my very successful entrepreneurs and all the others is this: When the successful entrepreneurs hit a setback, they simply take less time feeling sorry for themselves.

Check Out: The Top 100 Financial Experts of 2022
The Most Influential Money Experts: Where We Get Our Money Advice

Which characteristics or skills do you think have contributed the most to your success?

I have a great imagination. I was the dumb kid in school and couldn’t learn to read or write, so I spent my days in class dreaming up all kinds of stuff to do after school. I had six hours a day my entire life to practice my imagination. I’m also extremely good with people. I read people well and know how to use their talents to build a successful company. Every day in school I was constantly embarrassed by not having an answer; and, once I got out of that jailhouse, I decided I never wanted to be embarrassed again by not having an answer — and that’s made me an over-preparer in everything I do. Last, I have enormous energy and can outwork (anybody). That I got from my mother, who raised 10 kids.

What advice would you give to aspiring female entrepreneurs?

Forget you’re a female. It just gets in the way. I never thought of myself as a girl — I thought of myself as a competitor and competed with every man, woman and child I ever met. I built my business despite the “old boy network” in New York saying I couldn’t; and, when I was insulted or disrespected, I promised myself I’d get even. I did. I became the No. 1 competitor.

On those many occasions when I was afraid to speak up, I asked myself, “What would a man do?” And raised my hand and spoke up. I didn’t need credit, and often didn’t get it, but I made sure I was heard.

What’s the one piece of money advice you wish every person would follow?

I’m not very good at making money on money, but I’m really good at spending it wisely. Whether you’re struggling with a little business or running an empire, the best money spent is making sure your team has fun. It’s the most overlooked tool for building a wildly innovative team, and you need to make it part of the budget. My mom called it “mad money.”

At The Corcoran Group, we were great at selling real estate, but we were just as adept at having fun. We have shoe shiners on Tuesdays and Thursdays and manicurists on Fridays. We had our February Sweetheart Party where everyone came in costume; we had outrageous summertime picnics and each of my managers had to spend 5% of their operating budget on fun. If they didn’t use it by yearend, they had to give it back.

I treat myself to my own “mad money” in the form of $400 cash each week. I use that money to buy flowers, get a pretzel from the street cart or hail a cab when I don’t feel like walking. I spend it on all the little things that make my life that much more enjoyable, and I don’t worry about wasting a thing!

What’s the biggest mistake you’ve made in your career and what did you learn from it?

The first big mistake I made was blowing my first profit, $77,000, on a new idea — it was a total flop. I thought at the time it was a great idea, and I put all of our property listings on videotape so our customers could choose apartments from the comfort of their Lay-Z Boy chair at home. I named it “Homes on Tape” — “HOT” for short. It was a failure. My agents wouldn’t hand them out because they were afraid their customers might call another agent listed on the tape instead of them. I should’ve known better and lost the $77,000!

I was looking for a way to save face when my Navy captain husband Bill returned from playing war games in Korea “in real time on this new government thing called the internet.” So I registered Corcoran.com, threw all the videos online, and we had two sales out of London sight unseen within the week! No other real estate agents were on the internet then, and that was potluck because I had time to experiment with every wacked-out idea I could think of. And I immediately registered all my competitors’ URLs so that they’d have to ask me for it, and I’d know when they finally woke up to the internet — a tool that was going to change the industry forever.

That was my biggest mistake with the biggest reward! I learned soon after that all my best successes happened on the heels of a failure.