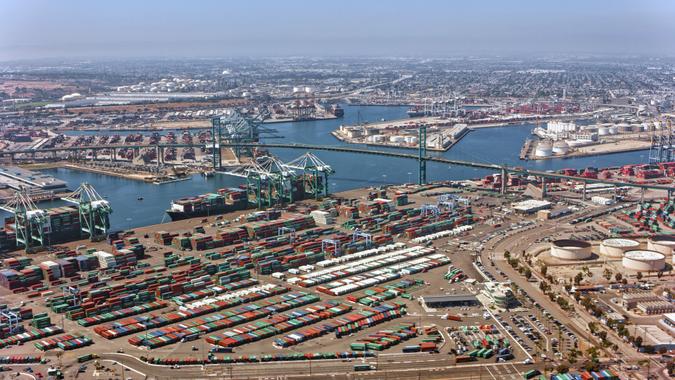 Today, the Biden Administration’s Supply Chain Disruptions Task Force, along with business leaders, port leaders and union leaders, will meet to discuss ways to mitigate delays and congestion at ports across the country. One of the goals, according to a White House press release, is to move toward 24/7 operations at the Ports of Los Angeles and Long Beach. Together, these ports represent the point-of-entry for 40% of containers to the U.S.

The task force will announce a number of public and private commitments to improve supply chain resiliency and move more goods faster, the press release states.

Commitments include expanding operations at the Port of Los Angeles to keep containers moving 24/7. The port will join the Long Beach Port in adding off-peak night-time shifts and weekend hours. Significantly, the International Longshore and Warehouse Union (ILWU) has said its members are willing to work the extra shifts, which can help to clear shipping backlogs.

Additionally, large companies have announced a willingness to use the nighttime hours to move cargo off the docks more quickly, enabling ships to dock faster. At the Port of L.A., the press release said, goods move 25% faster at night than during the day.

Retailers, manufacturers, and shipping companies are also playing their part to reduce bottlenecks, according to the release. Walmart is aiming to increase throughput by as much as 50% over the next several weeks by taking advantage of nighttime hours. Target, which is already moving 50% of its containers at night, plans to increase that number by 10% within the next three months, as does The Home Depot. Samsung, which recently revealed plans to fully re-open its Taiwan factory in November, plans to move 60% more containers out of the Ports of L.A. and Long Beach in the next 90 days.

UPS and FedEx are aiming to increase throughput at night, as well, to get more items into the hands of American consumers faster.

The Biden-Harris Supply Chain Disruptions Task Force will continue working to enable more businesses to access expanded overnight hours and move toward a 24/7 supply chain at every level.