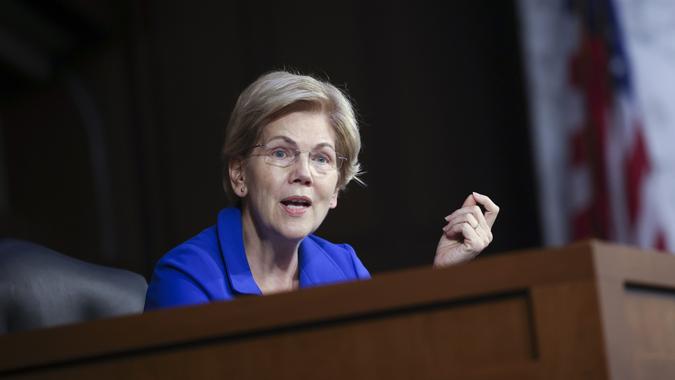 Senator Warren said re-nominating Jerome Powell as chair of the Federal Reserve, was “not a risk worth taking,” as she called him a “dangerous man” who has acted to “make our banking system less safe.”

“Chair Powell has taken too many actions to weaken the Fed’s oversight of our largest banks & deregulate Wall Street. I told Chair Powell today that renominating him for another term is not a risk worth taking and that’s why I’ll oppose his renomination,” Sen. Warren tweeted.

Powell took office as chairman of the Board of Governors of the Federal Reserve System in February 2018, for a four-year term ending in February 2022.

In a speech yesterday at the Senate Banking, Housing, and Urban Affairs Committee hearing about the CARES Act oversight of the Treasury and Federal Reserve, Warren said she had concerns regarding the steps Powell has taken “to weaken financial regulation during his tenure.” Warren said these steps include weakening bank stress tests, eliminating Volcker Rule restrictions separating commercial banking from Wall Street risk-taking, and easing liquidity requirements.

Howard Dvorkin, CPA and Debt.com chairman, told GOBankingRates that you can like him or hate him, but calling Jerome Powell a dangerous man “is unsettling.”

“As a CPA, I worry about such base-focused rhetoric because it distracts from our country’s real financial problems and the dispassionate math that can solve them,” Dvorkin says. “I don’t agree with everything the Fed has done over the past three decades that I’ve been a business owner and a financial counselor. But I never thought anyone in the Fed was ‘dangerous.’ Shortsighted? Sure. Bumbling? Sometimes. But dangerous? Never.”

Dvorkin added that banking regulations are detailed and nuanced, and the debate about them should be, too.

See: 8.5 Million Tax Refunds Have Yet to Be Sent — What to Do If You Haven’t Received Yours
Find: 11 Social Security Mistakes That Can Cost You a Fortune

“Federal interest rates have to increase because the economy is too hot and is fanning the flames of inflation. The real estate market is being artificially stimulated by the lower rates, which is causing severe price challenges. I just hope both parties can be boring for just a little bit. That’s what it takes to really make good financial policy in this country,” he added.

During the hearing, Warren told Powell, “Re-nominating you means gambling that for the next five years, a Republican majority at the Federal Reserve with a Republican chair, who has regularly voted to deregulate Wall Street, won’t drive this economy over a financial cliff again. And with so many qualified candidates for this job, I just don’t think that’s a risk worth taking,” according to a transcript of her speech.

“I know that some argue that your deregulatory actions are mostly harmless. I disagree. I think they’ve put taxpayers at risk for hundreds of billions of dollars, but even at that, so far you’ve been lucky. But the 2008 crash shows what happens when the luck runs out. The seeds of the 2008 crash were planted years in advance by major regulators like the Federal Reserve, that refuse to rein in big banks,” she added.

Nate Tsang, CEO of WallStreetZen, told GOBankingRates that it’s worth noting that Warren was the sole dissenting vote on the Senate Banking Committee during Powell’s 2017 approval, so her continued opposition is expected. The “dangerous” comment mostly relates to her views on Wall Street regulation, given that Powell worked for decades as an investment banker.

“Powell otherwise has bipartisan support, which doesn’t necessarily mean that he’ll be renominated, but does cast some doubt on the idea that a potential replacement would approach the job much differently,” Tsang said. “His focus on a strong job market and price stability is basically in line with what either party wants while they’re in power, even if other economists and Fed watchers are more concerned about high asset prices.”

See: Best Cryptocurrencies to Invest In for 2021
Find: Here’s How Much You Need to Earn to Be ‘Rich’ in 23 Major Countries Around the World

He added that while yesterday’s hearings also included discussion of greater diversity on the Board, which could include the leadership position, the prospect that someone with a markedly different philosophy will be put up as a replacement seems unlikely, “given both the political and economic risk such a change would create.”

This sentiment is echoed by other experts. Robert Johnson, professor of finance at Heider College of Business, Creighton University, and CEO of Economic Index Associates, told GOBankingRates that Jerome Powell and the Federal Reserve are getting attacked from all sides. “Generally, if one is being criticized by divergent ends of the political spectrum, one is likely doing a credible job. Despite being dealt an extremely difficult hand with a languishing economy induced by the pandemic, the Fed has done a laudable job in managing monetary policy through these perilous conditions.”

He added that when the dust settles, Powell will likely be renominated, “providing market participants with the reassurance that the Fed will continue to support the economic recovery. If he is not re-elected, expect some increased market turbulence.“