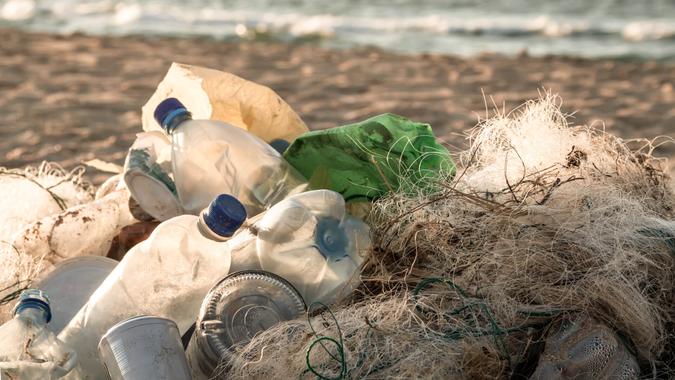 This Earth Day, if you see a gum wrapper or water bottle on the ground, the first thing you should do is pick it up and find a home for it in a trash can or a recycling bin. After that, think for a moment about how much that litter costs when it’s piled among the mountains just like it that pollute every corner of the Earth. The U.S. alone spends about $11.5 billion every year cleaning up litter, according to Keep America Beautiful — and that number seems likely to keep growing thanks to COVID-19.

Read: 16 Companies That Have Pledged To Go Carbon Neutral

Who Pays For It All?

Before looking at how things are getting worse, let’s look at the current situation. Businesses pay about 80% — or $9.1 billion — of that $11.5 billion annual cleanup bill. That might seem like someone else’s problem, but business owners meet that obligation by paying their employees less, charging you more for goods and services, or both. Nongovernmental organizations (NGOs) pay for another $769 million and educational institutions pick up the tab for another $240 million. The rest is paid for by states, counties and municipalities — with your tax dollars.

Those dollar figures, however, are from the good old days before the virus.

Although the pandemic killed jobs and stalled the economy, COVID-19 did succeed in boosting one kind of production — the production of trash and litter.

See: Billionaires Who Have Struck It Rich by Going Green

If trash had a hall of fame, cigarettes would take top billing as the world’s most littered consumer product by a mile. According to the Truth Initiative, smokers litter 4.5 trillion butts every single year. The 4,000-plus cancer-causing chemicals found in cigarettes — including arsenic, the key ingredient in rat poison — leach into the soil and water. They start fires all the time when flicked out of car windows and even when they don’t, their filters are packed with non-biodegradable plastics that make 1.69 billion pounds of toxic litter every year. Cigarette butts account for more than one-third of all litter collected.

All told, America’s cities spend between $3 million and $16 million picking up after smokers. But here, too, those are peachy pre-COVID-19 numbers. According to USA Today, cigarette sales spiked dramatically in 2020, which means that $16 million tab will surely rise as more and more butts hit the sidewalks, drop into storm drains and float toward their final destination — the ocean.

Check Out: Top Environmentally-Friendly Companies To Invest In

2020 Was the Year of Plastic, the Mother of All Earth Destroyers

Cigarettes are the world’s most commonly littered individual product, but in terms of volume, environmental destruction and the cost of cleanup, plastic is the planet’s archnemesis — and same as with cigarettes, COVID-19 made a bad problem much worse.

According to ABC News, the average household generated 4 pounds of plastic waste per person per day before the virus emerged. That number grew by 25%-30% during the pandemic, and much of that new plastic never made it into recycling bins or even landfills. Instead, it found its way into rivers, flood channels, and eventually, the ocean — groups that track plastic waste reported 70% increases in cleanup hauls.

Several forces were at work during the great plastic-ing of the COVID-19 world, according to a 2020 report from Science magazine:

More: How Will Ongoing Climate Change Efforts Impact US Jobs?

It’s hard to tabulate the exact cost of plastic litter alone — the statistics associated with the problem boggle the mind. The world has created 6.3 billion tons of plastic waste since 1950, more than 90% of which was never recycled. Ten million tons of plastic finds its way into the ocean every year — that’s a full garbage truckload every minute. One million marine animals are killed by plastic every year and at the current rate, by 2050, there will be more plastic in the ocean than fish.

When all the indirect costs are included, marine plastic litter alone was costing the world $2.5 trillion a year, according to the Guardian — and that’s before COVID-19 made more garbage, more cigarettes, more plastic and more pollution. This Earth Day, think about those numbers when you encounter a lazy litterer — or even worse, in a moment of weakness, if you consider becoming one yourself.