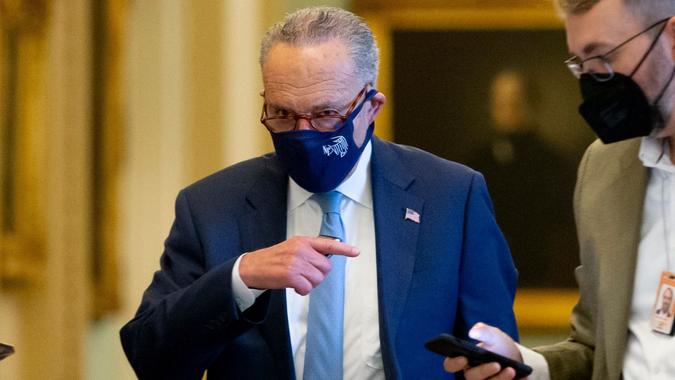 In another fast-moving twist in the debt ceiling saga, Senate Majority Leader Chuck Schumer announced today that the Democrats have agreed to Senate Minority Leader Mitch McConnell’s proposal to extend a debt limit extension until December. Yesterday, in a last-minute move just moments before the Senate was set to vote on the debt ceiling, McConnell said Republicans would offer a debt limit extension until December.

“To protect the American people from a near-term Democrat-created crisis, we will also allow Democrats to use normal procedures to pass an emergency debt limit extension at a fixed dollar amount to cover current spending levels into December,” McConnell said (in part) in a statement posted on Twitter.

Today, Schumer clarified that an agreement on an extension of the debt ceiling had been reached, CNN reported. “We have reached agreement to extend the debt ceiling through early December and it’s our hope we can get this done as soon as today,” he said in floor remarks Thursday.

This last move comes just 11 days before the U.S. hit its debt ceiling. “We now estimate that Treasury is likely to exhaust its extraordinary measures if Congress has not acted to raise or suspend the debt limit by October 18,” Treasury Secretary Janet Yellen said last month.

Meanwhile, President Biden met with CEOs and leaders yesterday to discuss the need to raise the debt ceiling, including leaders of the American Association of Retired Persons (AARP), Bank of America, Citibank, Deloitte, Intel, JP Morgan, Nasdaq, the National Association of Realtors, and Raytheon, according to a statement on the White House’s website.

“The failure to raise the debt limit will undermine the safety of the United States Treasury securities; threaten the reserve status of the dollar as the world currency and the — that the world relies on; downgrade America’s credit rating; and result in a rise in interest rates for families — talking about mortgages, auto loans, credit cards,” Biden said today, according to the transcript of this speech.