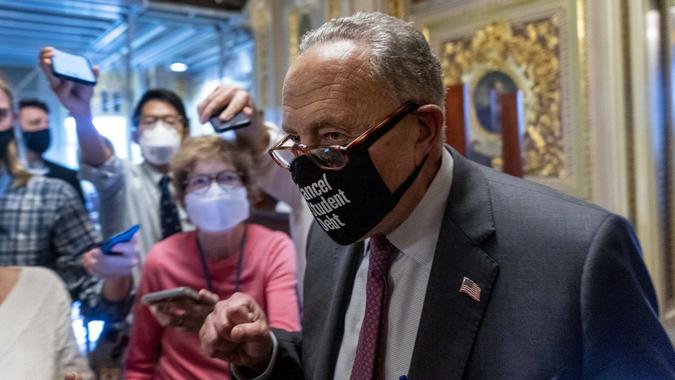 Note: this article has been updated upon response from Senate Democrats.

In a last-minute move just moments before the Senate was set to vote on the debt ceiling, Senate Minority Leader Mitch McConnell said Republicans would extend a debt limit extension until December.

Read: Yellen: Congress Has Two Weeks to Fix Debt Ceiling or US Will Go Into a Recession
Senior Stimulus: How an Additional $1,400 Check Could Help Social Security Recipients Afford Rising Grocery Costs

“To protect the American people from a near-term Democrat-created crisis, we will also allow Democrats to use normal procedures to pass an emergency debt limit extension at a fixed dollar amount to cover current spending levels into December,” he said in a statement posted on Twitter:

“This will moot Democrats’ excuses about the time crunch they created and give the unified Democratic government more than enough time to pass standalone debt limit legislation through reconciliation. Alternatively, if Democrats abandon their efforts to ram through another historically reckless taxing and spending spree that will hurt families and help China, a more traditional bipartisan governing conversation could be possible,” he continued in the statement.

Earlier in the day, Senate Majority Chuck Schumer tweeted, “Democrats are working to bring this GOP-manufactured default crisis to a swift end and avoid irreparable economic harm to people and families. Today, the Senate will vote on moving forward on House-passed legislation to suspend the debt ceiling.”

Democrats are working to bring this GOP-manufactured default crisis to a swift end and avoid irreparable economic harm to people and families.

Today, the Senate will vote on moving forward on House-passed legislation to suspend the debt ceiling.

It appears that Democratic senators signaled they will accept McConnell’s proposal to raise the debt limit for two months, The Hill reported. After leaving a closed-door Senate Democratic Conference meeting where lawmakers discussed McConnell’s offer, Democratic Sen. Tammy Baldwin said she believes congressional Democrats are willing to accept one of the offers from McConnell to raise the nation’s debt limit.

“In terms of a temporary lifting of the debt ceiling through close to the end of this year, we view that as a victory, we view it as a temporary victory though with more work to do,” she told CNN. Senate Majority Leader Charles Schumer is expected to announce his party’s position on McConnell’s offer later today, The Hill reports.

Meanwhile, President Biden met with CEOs and leaders today to discuss the need to raise the debt ceiling, including leaders of the American Association of Retired Persons (AARP), Bank of America, Citibank, Deloitte, Intel, JP Morgan, Nasdaq, the National Association of Realtors, and Raytheon, according to a statement on the White House’s website.

“The failure to raise the debt limit will undermine the safety of the United States Treasury securities; threaten the reserve status of the dollar as the world currency and the — that the world relies on; downgrade America’s credit rating; and result in a rise in interest rates for families — talking about mortgages, auto loans, credit cards,” Biden said today, according to the transcript of this speech.

Government Shutdown 2021: Will Social Security Checks Still Be Sent?
Recessions Explained: Definition, Warning Signs and What Happens During One

“My friends — and they are — many are my friends — the Senate Republicans’ position I find to be not only hypocritical, but dangerous and a bit disgraceful, especially as we’re crawling our way out of a pandemic that cost America 700,000 lives thus far, and we’re still battling it. Our markets are rattled. America’s savings are on the line. The American people — your savings, your pocketbook — are directly impacted by this stunt. It doesn’t have to be this way,” he added.