One of the faster-rising figures in the Democratic presidential field has been Massachusetts Sen. Elizabeth Warren. In many respects, she seems like an unlikely candidate. In her previous career, she had worked as a law professor at Harvard, building connections in the political world by consulting with legislators on bankruptcy reform. Along with her daughter, she even created a personal finance strategy called the 50/30/20 budget. Her full-time political career did not start until she first ran for her current Senate seat at age 62.

Warren launched the Warren for President campaign on Feb. 9, 2019.

The senator has won over many primary voters with a clear vision for a Warren presidency. She wants to end corruption in Washington. She also wants politicians to make their tax returns public and refrain from stock trading. Warren also intends to curtail corporate and lobbyist power, empower working and middle-income voters and make capitalism work better through regulation.

How that message resonates against candidates such as Sen. Bernie Sanders and former Vice President Joe Biden remains to be seen. Still, with a clear vision for a Warren presidency and respectable poll numbers, the Massachusetts senator has become a contender in the crowded field of Democrats vying to unseat President Donald Trump.

Who Is Elizabeth Warren?

Warren was born Elizabeth Ann Herring on Jun. 22, 1949, in Oklahoma City. She describes herself as growing up on the “ragged edge of the middle class.” Her father’s heart attack curtailed his earning power, and this forced Warren to wait tables at 13 years old.

Despite struggles at home, she excelled at debate and won the state high school debating championship while she was a student at Northwest Classen High School, which earned her a scholarship to George Washington University. She attended GWU but left after two years to marry high school sweetheart Jim Warren.

The Warren family moved to Houston, and she finished her undergraduate studies at the University of Houston. After her husband transferred to New Jersey, Warren enrolled in the Rutgers University School of Law. There, she received her J.D. degree and earned admission to the bar association.

From there, Warren worked as an attorney from her home and also taught at several law schools, which brought changes to her life on many levels. She divorced her husband in 1978 and married Bruce Mann two years later. Also, a fact unknown to many voters is that Warren began her adult life as a staunch conservative. Her work studying personal bankruptcies, however, started an ideological journey that would lead her to the other side of the political spectrum.

By 1992, Warren had become a professor at Harvard. She taught there for 20 years and served in advisory roles related to bankruptcy regulation beginning in the mid-1990s. The most noteworthy of these was chairing the Congressional Oversight Panel, which was related to the Wall Street bailout bill known as TARP. In 2011, she decided to run for the Senate seat once held by Ted Kennedy. She won the election in 2012 and has served Massachusetts in the U.S. Senate since 2013.

Elizabeth Warren on the Issues

Just like the other presidential candidates, Warren holds her own positions on the important issues at hand. Here’s what you need to know.

During her first Senate campaign, Warren garnered attention by pointing out that nobody became rich without utilizing the infrastructure paid for by all taxpayers. She expressed the belief that the “underlying social contract” obligates these entrepreneurs to return some of this profit in taxes.

One highlight of the Elizabeth Warren 2020 campaign is an ultra-millionaire tax. The tax would entail an additional 2% tax on net worth above $50 million per year and 3% on all net worth above $1 billion. She estimates this would raise $2.75 trillion in additional revenue over 10 years. Although Warren’s net worth falls well short of this level, she would likely pay more in taxes under her proposals.

Elizabeth Warren and the Environment

Sen. Warren has called for investments in clean energy technology. She also labeled President Trump’s withdrawal from the Paris Agreement as a “big gift to Republican donors.” Warren backed the Obama administration’s Clean Power Plan, designed to lower carbon dioxide emissions from power plants. She later spoke out against the Trump administration for working to repeal it. Warren has also expressed support for the Green New Deal.

The Massachusetts senator has repeatedly expressed support for “Medicare for All.” She has also stood out from most other presidential contenders by calling for an end to the private medical insurance industry.

Such plans come in many forms, however, and her contenders each define Medicare for All differently. Interestingly, Warren has not laid out an actual plan. She sees Medicare for All as a slogan for expanded public coverage but has stopped short of describing it as a single-payer plan. Her campaign website makes no mention of healthcare, as of Aug. 13, 2019.

Most of Warren’s non-college education proposals have stressed early childhood development. She has made one of the centerpieces of her Elizabeth Warren 2020 campaign the “Universal Child Care and Early Learning Act.” The act would provide child care for all families, regardless of income. It would also include a plan for early education, something she believes helps children throughout their lives. Warren also supports tuition-free college at two- and four-year institutions.

Warren has spoken out against high debt levels and abuses within the student loan program. She has unveiled a proposal to cancel student loan debt for 75% of borrowers. The cancellation would apply to all borrowers earning under $100,000 per year and partially to those earning between $100,000 and $250,000 per year.

Neither President Trump nor most of her Democratic opponents have signed on to such a sweeping plan. All candidates, however, advocate lower interest rates, debt forgiveness and tuition-free college in some form.

The Elizabeth Warren 2020 campaign describes how a minimum wage job saved her family from losing their home while she was growing up. She now feels a minimum wage job won’t keep a single mother with a child out of poverty. Consequently, she co-sponsored legislation with her opponent Bernie Sanders to phase in a $15-per-hour federal minimum wage by 2024.

On the issue of immigration, Warren stands in stark contrast to Trump. She wants to reduce refugee detentions and eliminate private facilities. Her plan would also send aid to Central American countries from which many immigrants come.

Most of the plan focuses on how the country should handle undocumented immigrants, however. Warren wants to decriminalize crossing the border without papers, making it a civil offense instead of a criminal matter. Moreover, she would more than quadruple the admittance of refugees from current levels, also ending Trump’s “Remain in Mexico” plan. The Warren plan would also reinstate the Deferred Action for Childhood Arrivals program and extend protections to immigrants who fall under the Development, Relief and Education for Alien Minors act, also known as DREAMers.

Numerous proposals made by the Elizabeth Warren 2020 campaign center around income inequality. She has written around 20 plans to address this issue. Moreover, her ultra-millionaire tax would redistribute some of the wealth she feels the rich have accumulated at the expense of the middle class.

Democrats have made climate change a central issue as they feel President Trump has ignored and dismissed climate issues. The Massachusetts senator has brought forth five climate-change-related plans which center around the Green New Deal.

Under her plans, the U.S. will orchestrate a coordinated move to clean energy. These plans include provisions to prohibit oil and gas drilling on public lands and force the Pentagon to achieve net-zero carbon emissions by 2030. A provision to tax goods imported from countries with less stringent environmental standards is also included.

Abortion restrictions passed in some states during the Trump years have alarmed Democrats, including Warren. Consequently, she has pushed for what she calls “reproductive justice.” Warren wants to make it more difficult for states to block access to birth control or abortion services. She would also repeal the Hyde Amendment, a law that bars those who use federally funded healthcare programs from abortion services.

Warren’s proposals also extend beyond abortion. She has made universal child care a centerpiece of her campaign. In the past, she has also supported the Equal Rights Amendment and the Paycheck Fairness Act.

Both Elizabeth Warren and her Democratic opponents must run against President Trump in a time where unemployment has fallen to multiyear lows. Warren campaigned for extended unemployment benefits in 2014. With the unemployment rate at just 3.7%, however, neither Warren nor the candidates have outlined a specific plan directly related to this issue.

Data breaches have harmed millions of Americans, and few candidates have given it more attention than Warren. In April, she introduced a bill that would make it easier to criminally charge tech executives for data breaches. She also wants to break up Apple, Facebook, Amazon and Alphabet — parent of Google — via antitrust law.

The views of Elizabeth Warren on Social Security mostly echo that of her opponents. She opposes both reductions in benefits and privatization. The senator would also like to extend the program to low-income and disabled workers. For cost-of-living increases, she supports using the Consumer Price Index for the Elderly. The CPI-E would adjust payouts based on how seniors actually spend their money, calculating benefits more on health costs and housing inflation.

The Massachusetts senator has pushed for sustainability in ways that both address and go beyond climate science.

Yes, she supports the sustainability of natural ecosystems. While campaigning in Iowa, however, Warren expressed a desire to see more people live and work in rural areas that focus on sustainable farming.

Before running for president, she also introduced the Accountable Capitalism Act. The act works to ensure that corporate management considers external shareholders, as well as environmental and social issues when making business decisions.

Who Will Most Likely Support Elizabeth Warren?

Along with Biden, Sanders and Sen. Kamala Harris, Elizabeth Warren is considered a top contender for the Democratic presidential nomination. According to the RealClearPolitics average, she only lags former Vice President Biden in the polls. As of the polling website’s most recent data on Aug. 12, 2019, Warren passed Sanders at 18% and 16.2%, respectively.

So far, she has won endorsements from nine U.S. House members, including Joseph Kennedy III — a former student — and U.S. Rep. Lori Trahan. She has also won the support of her home-state Senate colleague Ed Markey.

Ideologically, most consider her one of the more progressive candidates. Unlike Bernie Sanders, however, she proclaims herself as a supporter of capitalism, albeit with regulation — a message that could resonate with many progressives.

Nonetheless, electing Elizabeth Warren president remains an uphill battle. Biden holds a commanding lead, and she will have to deal with the greater name recognition benefiting Sanders and the challenge from Harris among minority and women voters.

She also faces some disturbing trends from her home state that could bode poorly. In her last election, she did not do well with working-class white women or male independents. If Warren can hold or improve on her second-place position in New Hampshire, however, she could dramatically increase the odds of winning the delegates needed to capture the Democratic presidential nomination. 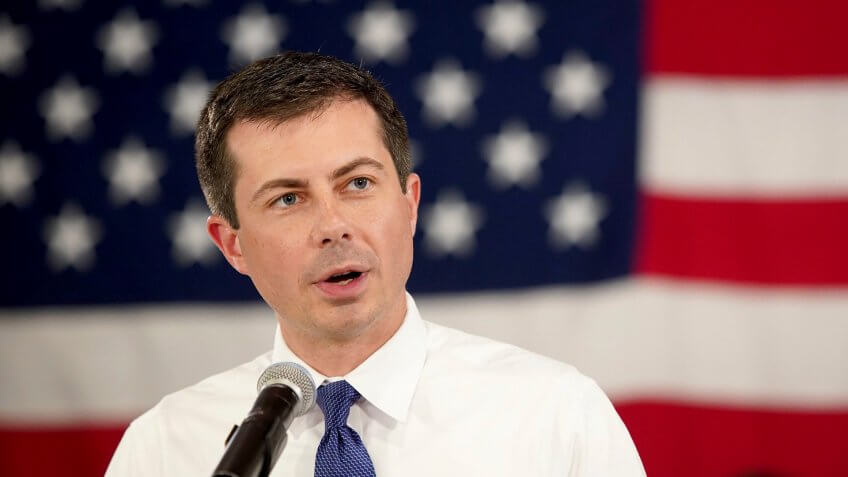 Pete Buttigieg 2020: A Look at His Stance on the Hot Topics

Mayor Pete's views and prospects for the 2020 race.

GOBankingRates > Money > Economy > Elizabeth Warren 2020: See Where She Stands On the Important Issues