How Much Could Potential Water Conservation Measures Cost California Violators? 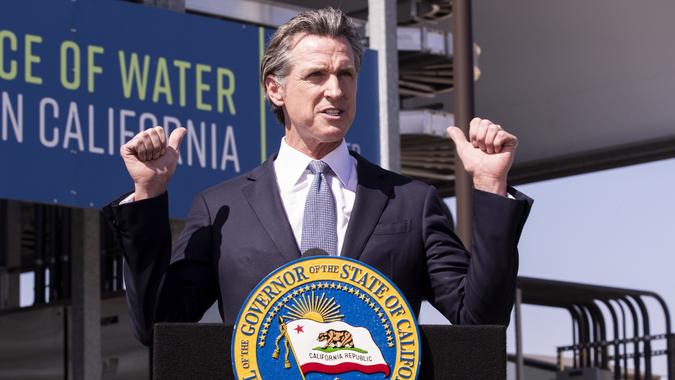 Discover: 10 Dollar Store Items That Aren’t Even Worth the Buck
More: 10 States That Receive the Most Social Security

After convening with leaders of the largest water suppliers and organizations in California, on May 23 Newsom warned that that state will have to implement mandatory restrictions should localized measures fail to improve the conservation of water.

If that weren’t concerning enough, the record drought was during California’s wet season. Its dry season is just starting.

The governor has previously recommended everyday conservation techniques to residents, including taking shorter showers, watering lawns less often and doing fewer and fuller loads of laundry, the Times of San Diego reports. However, he may need to follow the lead of former Governor Jerry Brown and mandate strict fines to deter water wasting.

During the California drought of 2012-2016, Brown imposed a 25% overall state cut of water use and mandated fines of up to $10,000 per day to water agencies and individuals found in violation, according to CBS News.

The Metropolitan Water District of Southern California has already directed residents of Los Angeles, Orange, Riverside, San Bernardino and Ventura counties to cut down on watering their lawns (to no more than twice a week) and promises to impose $2,000 fines to those found watering their lawns too frequently. At the state level, individuals now can be fined $500 for not complying with state water board regulations, including watering lawns within 48 hours of a rainfall or allowing a sprinkler to run off onto sidewalks.

After demanding residents voluntarily cut their water use by 15% last year, Newsom issued an executive order to state water organizations in March to be more assertive with their conservation approaches, according to The Los Angeles Times.

It also reports that the State Water Resources Control Board is to hold a May 24 vote on emergency regulations and contingency plans. If deemed necessary, it will impose water reduction rules in every urban area in California.

“Every water agency across the state needs to take more aggressive actions to communicate about the drought emergency and implement conservation measures,” Newsom said in a statement. “Californians made significant changes since the last drought but we have seen an uptick in water use, especially as we enter the summer months. We all have to be more thoughtful about how to make every drop count.”

State spokesperson Erin Mellon said the Newsom administration would reassess conservation progress in “a few weeks,” according to CBS News.